Reddit Raises $16k For Viral Metalhead Who Got Guitar From Deceased Dad; Plus ANOTHER Guitar & ALICE COOPER Tickets

This Shortened Version Of METALLICA's <em>St. Anger</em> Is Pretty Clever
The internet can be a wonderful place sometimes.

Yesterday, we told you about Johnny Crow. The 16-year-old sadly lost his dad to a heart attack in April right before his birthday. Long story short, before Jonny's dad died, he made sure to put in an order for the exact guitar Johnny wanted for his birthday. On Johnny's big day, his sister took him to the guitar shop and showed him his gift, leading Johnny, and basically anybody watching the video, to bawl their eyes out. But the story gets even better.

After the video went super-viral, people on Reddit wanted to contribute to Johnny to help get him some lessons. The owner of the music store where Johnny got his guitar noticed the post, and left a comment confirming his identity. He noted his guitar shop has a PayPal account and if Reddit users wanted to send a donation with the phrase "Happy Birthday Johnny" to [email protected], he would ensure Johnny get all the money in the form of a gift card for strings and lessons and whatever else he might need.

As of 9:30 pm on June 8th, they raised $16,250.45 on Johnny's behalf. Far more than anybody expected. The music store is putting Johnny's family in touch with a lawyer to figure out the best thing to do with the money.

It seems like another user reached out to the music shop owner and offered to buy Johnny another guitar.

The icing on the cake was one of Johnny's cousins came in the thread to offer some context about the gift. He also noted that the family got Johnny a pair of Alice Cooper tickets.

Alice's guitarist Nita Strauss saw the post and arranged with his family to have Johnny come backstage and meet Alice at the show he's going to.

There was just so much love and joy in this Reddit thread, that it just restored my faith in humanity. 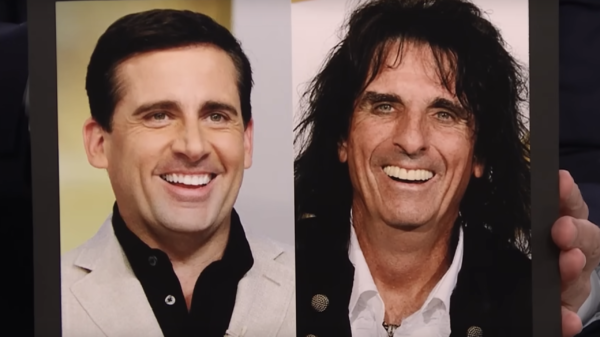 Actor STEVE CARELL On Meeting His Doppelgänger ALICE COOPER: "He Couldn't Have Been Nicer"

I mean, do these guys look like twins or what?