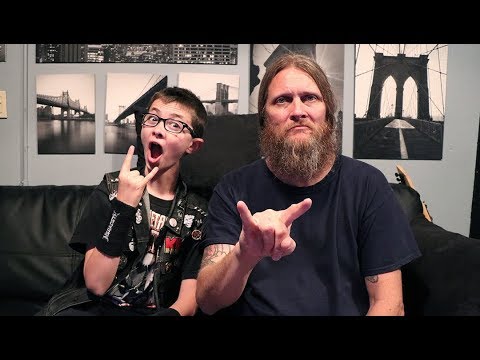 Founding Obituary guitarist Trevor Peres sat down with Little Punk People's Elliott Fullam before the band's show at the Gramercy Theatre in New York and talked about everything from music, to beer, to modern culture. Peres says about the last point that everyone needs to just lighten the hell up and stop being offended by every single thing.

"I would try to accomplish… everybody to lighten the hell up in this planet. Everybody's so uptight and gets offended by every fucking word people say, it's stupid. I'm sick of it! I'm offended by everybody getting offended! (laughs) It really is, ya know? This whole PC crap… vafanculo [Ed. Note: This is Italian for "fuck"] ! Seriously, that would be my ultimate goal. For everybody to just shut the fuck up and get along and be cool. Ya know? Really, it's stupid. It's ridiculous."

Peres also talks about doing a follow-up to Obituary's Hopped In Half beer done with 3 Floyds Brewing Company in Cigar City in Tampa, Florida.

"We're still working on the packaging idea and the concept behind it. It's done, we've already tasted a couple versions of it. So hopefully after this tour we're gonna have meetings and get it canned, and get it done. And if it's successful, that should hopefully be an ongoing beer."

So there you have it – have an Obituary beer when it's out and lighten up. You can watch the full interview above, which we recommend you do.