THE WEEKLY INJECTION: New Releases From AFTER THE BURIAL, HYPNO5E, and More Out Today - 2/19

This edition includes a triumphant comeback, a "comeback," crushing heaviness and more. To the metals…

After the Burial – Dig Deep

One of deathcore's mainstays is making their triumphant return following a rough period. There feels like there is an added fire behind these songs, and rightfully so. The band is able to prove that they aren't done by any means and still honor Justin Lowe's memory. This one is powerful for different reasons.

I assume that Delain will be dropping a new album pretty soon since their last one, The Human Contradiction, came out in 2014. This EP contains live versions of some of that record's songs and three studio tracks. This ought to hold you over until the next album if you're already a fan.

So far all I've heard of this record, or this band for that matter, is the accompanying over fifteen minutes video below. Instrumental post-metal has a tendency to lose my attention, but holy hell is this great. You still get all your lurching low riffs as the meat of this song, but when they break from this is when they get me. The atmospheric moments of this band as really dense and, in a way, beautiful.

Hypno5e – Shores Of The Abstract Line

With this great release, Hypno5e further cement themselves as one of the most diverse and underrated bands out there. This record sees the band touching on post-metal, deathcore, death metal, atmospheric rock, and more. It's been a long four years waiting for this, but it was worth the wait.

Now to shift gears completely. I'm temped to call this Southern metal, but Canada is significantly North from that whole scene. I suppose this is just a testament to how influential regional aesthetics can be everywhere else. If you dig Graveyard, Monster Magnet, and the likes, get up on this.

It's been a long while since the tracks "Woman" and "Joker and The Thief" were inescapable. The band has had several line-up changes and other records since then. They never really stopped, yet I'm seeing people talk about Victorious as a comeback album. Sorta just sounds like another Wolfmother record, which isn't a bad thing. They are still able to throw down on weird, groovy 70's influenced hard rock.

In this article: AFTER THE BURIAL, Delain, Hemelbestormer, hypno5e, Monster Truck, WOLFMOTHER 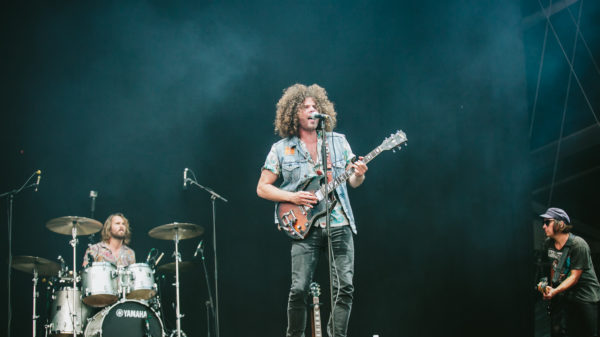 WOLFMOTHER Drops Off PRIMUS Tour Due To Visa Issues

They're replaced by Black Mountain and Battles.