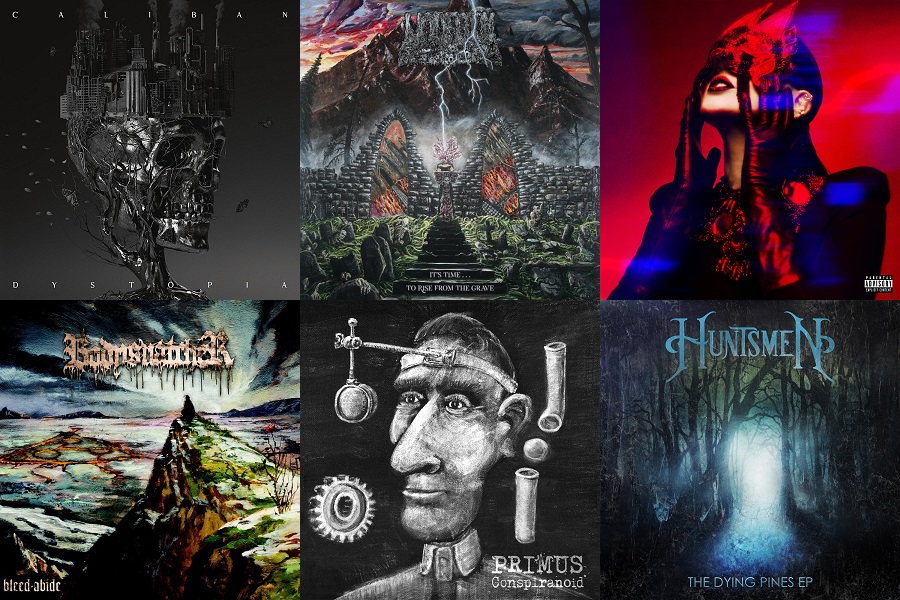 Starting this week with some high energy aggression from Bodysnatcher. These Floridians know their way around the deathcore sound with low guitars, gutteral vocals, breakdowns, and those fun guitar noises. You know the ones. This one will get you karate kickin' in the pit.

Caliban's twelfth album features their traditional recipe of metalcore with elements of thrash, deathcore, pop, and more mixed in. This time they also have some guest spots by Christoph Wieczorek from Annisokay, Marcus Bischoff from Heaven Shall Burn, and Jonny Davy from Job For A Cowboy. This feels very much a soundtrack of this time with tracks like "Dystopia" and "VirUS." So that's fun. Max has a full review here.

Dorothy – Gifts From The Holy Ghost

Dorothy is one of those acts I see around more than I actually hear, so I decided to give this album a shot. Gifts From The Holy Ghost is about what I expected with pretty straight-ahead rock that's very vocal focused. The lyrics are triumphant, the songs are VERY catchy, and Dorothy Martin's voice is undeniably great.

2020's Mandala of Fear was one of my favorite records of the year. On that album they started to lean more into melody and vocal harmonies than they had on their other album. This EP keeps that going even more as they show off their harmony skills on their cover of Crosby, Stills, Nash & Young‘s “Carry On," and the title track. Riff's are still to be had though, especially on "Let the Buried Lie Forgotten."

In 2020 it was revealed that Black Sabbath stole all their music from a Jazz trio lead by Milton Keanes called Jazz Sabbath. Ever since then the jazz band as been releasing the original versions that Tony Iommi and crew have been claiming as their own. This is their second album and it features "Paranoid," "N.I.B.," "Black Sabbath" and others before Geezer and the boys ruined them. I think that's the lore anyway. In reality of course this is Ozzy and live Sabbath's keyboard player Adam Wakeman doing jazz renditions of Black Sabbath classics and they're spectacular.

It's been five years since Primus released new material Les, Ler, and Tim are finally back with Conspiranoid. This trio of weird, bass-driven songs is unmistakably Primus. After playing A Farewell To Kings every night on what is now two tours, there is also unsurprisingly more Rush influence than ever.

Undeath – It's Time… To Rise From The Grave

Now for some pure unadulterated death metal. Undeath's sophomore record is frantic, dark, and a stellar continuation of the groundwork laid on 2020's Lesions of a Different Kind. Plus it has "grave" in the title, so you know it's what you want in a death metal record. Jeff has a full review here.

Oh hey! You found the super secret section of this week's post that features a couple releases dropping Saturday because of Record Store Day. Find all the other Record Store Day titles Here.

Of everyone in Metallica, I always expected Kirk to be the one to release a solo thing. I frankly just thought it would happen sooner, and I know why it didn't (I also saw Some Kind of Monster), but still. On his first foray on his own Hammett, is dropping this four track EP of cinematic tracks. It's absolutely not what I expected, but it makes me want more of THIS version of Kirk's mind in the main band's output.