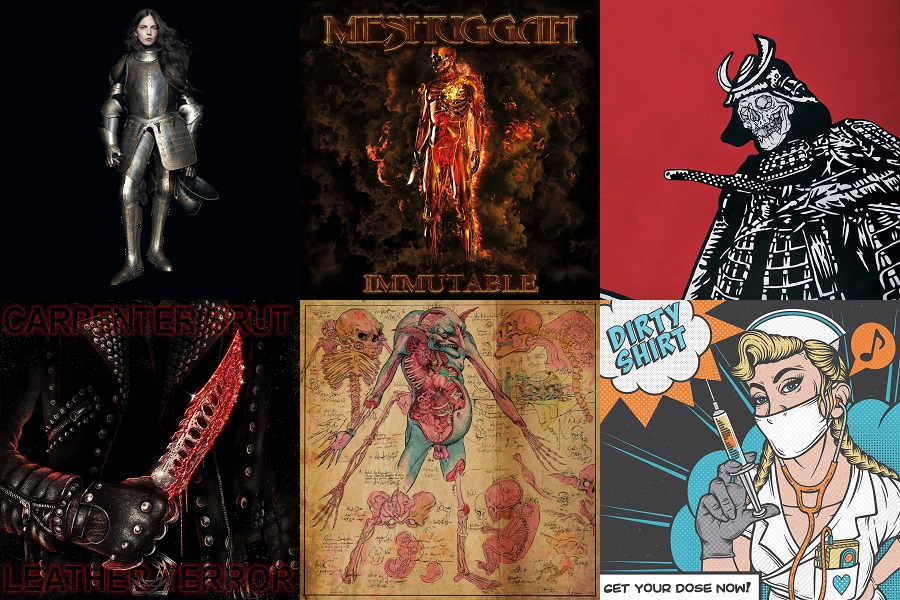 This week's new heavy metal releases include lots of leather, folk metal weirdos, that one Swedish band that's real good at rhythms, and more! To the metals…

Also! Bandcamp is doing their second of four Bandcamp Fridays this year where artists get 100% of the proceeds for all sales. So if you can get stuff from Bandcamp, please do.

With a name like Black Death Cult, you can probably guess what you're in for. This is a nasty and dark ride of an album with black metal, doom, and death metal blended together. However, that is just on it's surface. They are subtle layers of synth, piano, and ambience that are most rewarding upon re-listens. These layers add new depth to this and create a somehow more hellish audio landscape.

Carpenter Brut is back to get you dancing! Leather Terror is all the driving, quasi-industrial, synth stuff you've come to expect and love. This time you're getting a diverse roster of guest spots from Greg Puciato (Dillinger Escape Plan), Ulver, Sylvaine, and more.

Dirty Shirt – Get Your Dose Now!

Long time readers will know by now that I am partial to the weirder side of heavy music. Dirty Shirt certainly has my attention this week. They're like a mix of 6:33, Russkaja, and Turisas. This is bombastic, fun metal with Romanian folk mixed in.

Eunoia – Psyop Of The Year

If this Weekly Injection has been too upbeat for you so far, then the latest from Eunoia should take care of the need to darkness. Psyop of the Year is noisy, chaotic, dissonance that dips its toes in black metal, grindcore, hardcore, and alternative metal. It's really difficult to succinctly nail down, and that's sure to be part of its appeal.

Gggolddd – This Shame Should Not Be Mine

Somewhere between Carpenter Brut and last week's Emily Jane White you'd find the latest from Gggolddd. There is a bit of a darkwave base with some evil synths and post-metal waves of heavy on This Shame Should Not Be Mine. This is dark, sad, and beautiful.

What do I even need to say? New Meshuggah! Groove to it you dingus. Max has a full rundown here.

Nekrogoblikon – The Fundamental Slimes And Humours

Buy from the band

After four years the goblin has returned. Like every Nekrogoblikon they're giving you a lot of metal flavors. I'm unsure if it's meant to be tongue-in-cheek still, because they do this so well. This album does feature the second instance (that I can think of) of a goblin dick on the cover of a record. So, it also has that going for it.

So often a stoner rock band just whips out some Black Sabbath or Kyuss riffs and calls it good. Steak, on the other hand, retain a smoky aura with plenty off riffage, but they do so with another layer of song writing prowess. This record is stoner rock with a prog spirit. Stream the whole thing right here.

Two Minutes To Late Night pivoted their whole thing during this quarantine and have been putting out fun star-studded covers. Today (April 1st, 2022) and today only, they are putting out their latest Bandcamp exclusive EP. This one includes covers of David Bowie's “Station to Station”, Judas Priest's “Screaming for Vengeance” Van Halen's "Unchained" and more and more. 100% of the money goes to the artists behind these covers. Get it before it's gone!