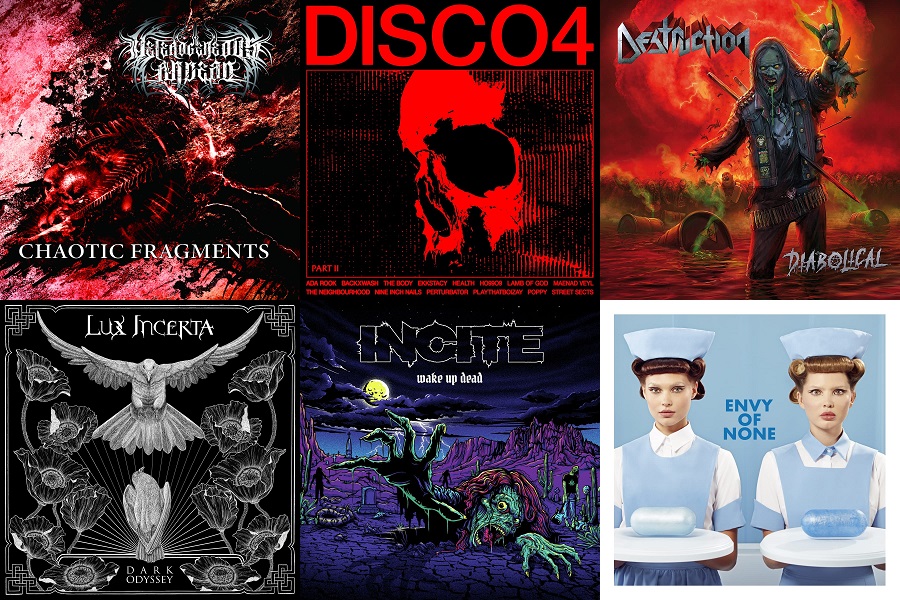 This week's new heavy metal releases include epic heaviness, epic prog, an all-star album of collaborations, and more! To the metals…

Getting this week started with some thrashy goodness. This is no frills, high-speed aggression from these long-running headbangers. Like their peers Kreator, Sodom, and Slayer, you wouldn't know these guys have almost forty years of doing this. Full review from Kevin right here.

With Rush in the rearview, guitarist Alex Lifeson has launched this new band Envy Of None. This debut is prog but in a different way than than you're used to from him. Those expecting lengthy tracks about Tolkien stories need look elsewhere. Instead, this is closer to Pure Reason Revolution or some Steven Wilson solo stuff.

When you search "Hällas band" online the first thing that comes up unsurprisingly is the band's website. The link then says, "Hällas – Adventure Rock," and this is the most apt description of what these guys are doing. Isle of Wisdom has some old school vibes and that whole spooky thing Ghost does, but it's also very cinematic and epic. It really sounds like you're on an adventure when it's on. Jordan has a review here.

I have to admit that I don't fully know what the deal with Health is, but they have a hell of a contacts list. There are a lot of familiar names if you skim the bottom of the album art. I was prepared for a hard synthwave record with some guest vocals, and there is SOME of that here. However, some of these songs feel like Heath are in the background on their own album just adding some atmosphere. Especially the Lamb Of God collaboration below.

This is rad. At its core, this is a death metal album, but when it strays from that is where the money is. There are symphonic bits, synths thrown in, operatic vocals battling death metal growls, and more. It's like a straight ahead Sigh or uneXpect record, despite not being that straight ahead.

Richie Cavalera and his crew are once again bringing the thrash grooves on Wake Up Dead. I'm a little surprised that it took six albums before Max made a cameo, but he finally popped up and is helping out on a song that doubles as a recipe. I could be wrong there. I don't read lyrics.

I forget how I came across Egor, but his stuff is quite good. Lappo is a one-person prog machine with a vibe that's somewhere between Dream Theater and Devin Townsend. Start with Naturealism, then work your way through his hefty back catalog. You shan't be disappointed.,

Lux Incerta's first record in a decade hits like Insomnium, Woods of Ypres, and Agalloch all at once. This is heavy, epic, and haunting stuff. Highly recommended.

Joe Satriani – The Elephants of Mars

On album number 18 from Joe, he's taking you to space. Like every Satriani album, it's more than just a guitar wanking over a 4/4 beat. The Elephants of Mars features funky numbers, emotional ditties, and of course, oh so much guitar shredding. Top notch song writing as always.