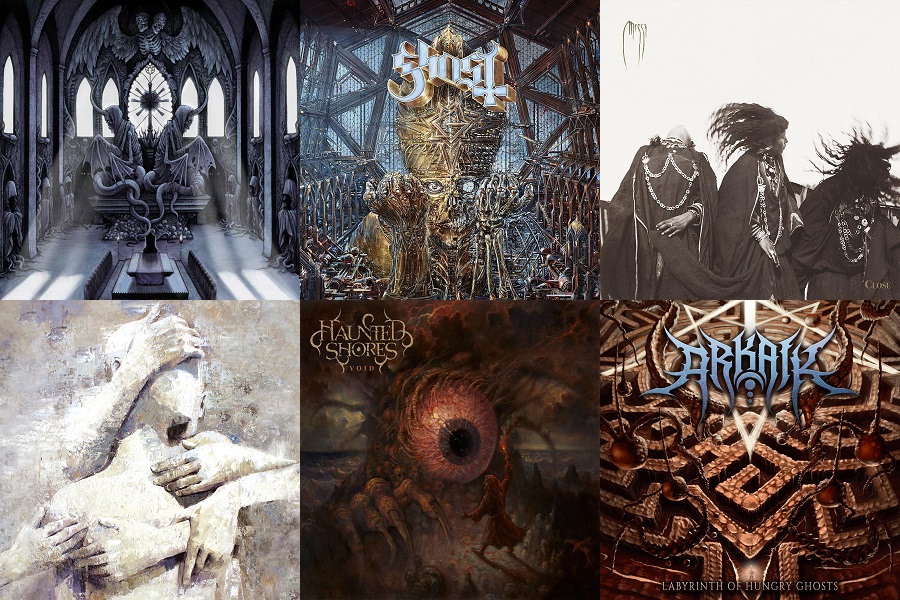 This week's new heavy metal releases include Australian legends, lots of spookiness, and more! To the metals…

Starting with some slams this week. These fellas bring big ol' breakdowns, duel (and occasionally trio) vocals, and some rather epic moments in one hefty package. Despite their self-identification as "Good Old Fashioned Deathcore," these guys break the mold quite a bit on Sanctum.

Rapid rhythmic shifts and intricate fretwork are expected from a Arkaik record, and you're getting a lot of that here. The group's first record in five years features an almost entirely shifted line-up with vocalist Jared Christianson being the sole holdover from the Nemethia record. However, Lucid Dawn guitarist Miguel Esparza is back so long-time fans should be excited to hear an old friend.

Buy now from Razor To Wrist

Every time I write up something for Dog Fashion Disco, there's always a comment saying something to the effect of, "There's a name I haven't heard in a long time." Well they haven't stopped and they're still as wild and weird as ever. Cult Classic is their first album of all new material in seven years after they re-recorded much of their early catalog. In that time they have written tracks that feel like rad departures for them as well as what you'd hope from these guys.

Everyone's favorite fun, spooky band is back with another record of haunted earworms. Papa and the ghouls got some pals like Opeth's Fredrik Åkesson, Cardigans' Peter Svensson, Klas Åhlund of Teddybears, and others helping them out this time. Tobias Forge is singing about the rise and fall of empires this time which feels oddly apt, so that's fun too! Check out Dillions chat with Papa himself here.

Haunted Shores has sort of been the Periphery off-shoot you'd expect for a majority of it's existence. On Void Mark Holcomb and Misha Mansoor are embracing their grim side more than ever. This one definitely feels like a Bulb-related project but there is a lot of blackened metal moments that give this a darker vibe. It's pretty rad.

Konvent – Call Down The Sun

Now for some straight-ahead darkness. This band came in swinging on their 2020 debut Puritan Masochism, and they're ready to hit even harder this time. The lurching death metal on Call Down The Sun seems poised to put this band in a category of their own in the current death metal renaissance we're living in.

Let's keep the haunted atmosphere going, because why not? The latest from Messa brings bands like Windhand, Witch Mountain, and King Woman to mind, but this outfit includes some additional international influences to their brand of doom. Shout out to them for being the only band this week (probably) to weave in some duduk, saxophone, and dulcimer.

I was made aware of this band very recently, but I immediately became intrigued. They're one of the most unique bands I've heard in a long time. On Pyramiden they combine djent, blackened metal, and groove metal with an almost Bjork-like vocal. It's an album that kept be guessing on first listen, then had me coming back immediately.

Wrapping this week with one of Australia's most iconic acts. On Rewiggled you're getting a double album with disc one featuring Australian acts covering The Wiggles and disc two featuring the band covering their favorite songs. The second disc is where the money is at obviously as we hear The Wiggles take on Queen's "Bohemian Rhapsody," Dropkick Murphys' "Shipping Up to Boston," and fellow country men AC/DC's "Thunderstuck," and many more. A stone cold classic, for sure.