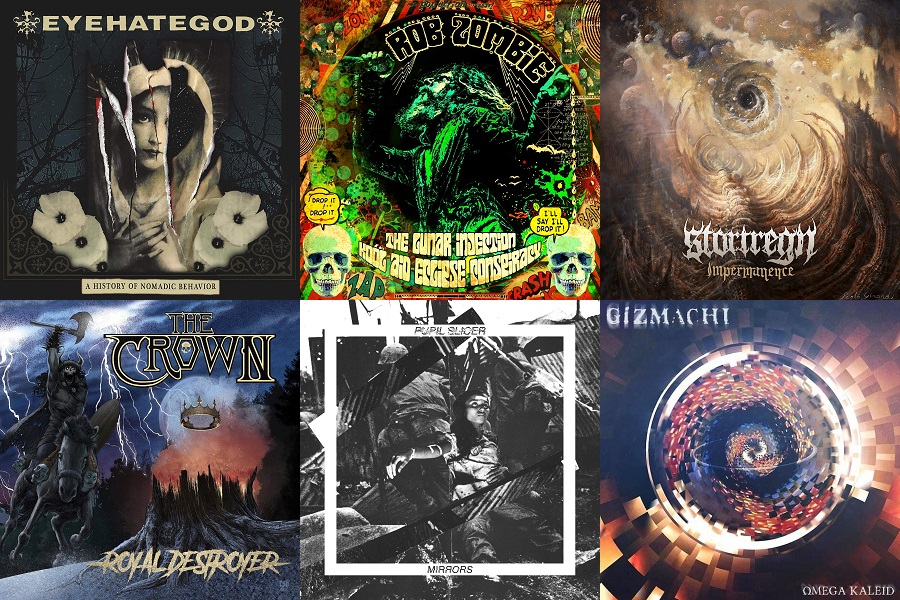 This week’s new heavy metal releases include guitar flurries, a sludge legend's return, eye stuff that makes me uncomfortable, and more! To the metals…

On their eleventh album The Crown are coming at you with a frenzy of notes and melodic aggression. It winds up being a pretty good presentation of everything this band has been through over their thirty plus years. You're getting modern metal, the 90's Swedish scene, and more all in one convenient compact disc, or vinyl record, or album stream, or whatever.

Eyehategod – A History Of Nomadic Behavior

It's been seven years since Eyehategod's last sludgy opus, and the band went through a lot in that time. This included vocalist Mike IX Williams getting a new liver and, of course, a global pandemic. Well the wait is over and those topics and more are touched on in A History Of Nomadic Behavior. It's all the slow, heavy riffage you'd hope for from these NOLA legends. Max has a full review here.

Gizmachi. That's a name I haven't heard in a long time. Personally since Ozzfest '05. After a whole bunch of years this outfit is back with Soilwork's Björn Strid on the mic and a very different sound. There are certainly still grooves to be felt, but the nu metal thing is largely set aside for shredding melodic guitar frettery and proggy rhythms. I've very on board for 2021 Gizmachi.

Pupil Slicer are a young band that embraces chaos. The trio dabble in mathcore, death metal, sludge, ambience, groove metal, and more on this record. This one is for those that have had a hole in their heart since Dillinger Escape Plan broke up. They're a different animal than DEP, but the influence is clear and the band is wonderful.

How about some evil-sounding tech shit? Impermanence is an eight track cosmic exploration through metal. The record showcases the band's ability to combine black metal, various eras of death metal, technicality, melody, and even a jazzy break, and they do it very well.

Robert Cummings first record in half a decade sounds like the early days of his solo work in the best way. You're getting horror quotes nestled in chunky grooves and massive guitars work from John 5. If you've been feeling the need to slam in the back of your vehicle, this would be the one to to that to this week.