THE WEEKLY INJECTION: New Releases From CORROSION OF CONFORMITY, AVATAR, and More Out Today - 1/12

THE WEEKLY INJECTION: New Releases From VILLE VALO, OBITUARY & More Out Today 1/13
In this edition we have king-obsessed clown metalers, some tremendous rockin' tunes, epic shit, and more!

In this edition we have king-obsessed clown metalers, some tremendous rockin' tunes, epic shit, and more! To the metals…

Starting this week with a wildly underrated band. Sure they're a straight up rock band, but their riffs are ridiculous and their song-writing chops are top notch. This, their sixth album, would be a great place to get introduced to this band if you're not familiar already.

The clown metal band everyone loves has returned with their seventh album, and they are really into a king theme this time. It's harder then ever to pinpoint their sound on this album as they seem to meander in different directions with each song, which I have to respect. This album is all over the place. I think fans will dig it, and it will rightfully get them to the next level in their careers.

Corrosion of Conformity – No Cross No Crown

It's been thirteen years since Pepper Keenan fronted COC and I for one think this their best album since their last album with him In The Arms of God. They're really leaning into the stoner sound that wasn't quite there without him. Do all of your marijuana drugs to this.

What's with operatic metal bands losing their vocalist like twelve years into their career? This is Leaves' Eyes' first album with new vocalist Elina Siirala, who is very talented, but I had no idea Liv Kristine wasn't in the band anymore. Like the album cover suggests, this album will be the perfect soundtrack to play while you battle at sea.

If you're looking for something that soars as high as Leaves' Eyes, but without all the folks stuff, look no further than Sages. These guys are a bit djenty, but diverge what what you'd expect from a band of their ilk with proggy moments, epicness, and plenty of technicality. So maybe exactly what you'd expect from a djent band, but delivered differently.

Joe Satriani – What Happens Next

With the next G3 tour looming (or maybe even happening now?) it's no surprise to see a new record from long-running, OG guitar wanker Joe Satriani. He apparently set out to make a straight forward rock record, and he achieved that goal. This album is absolutely a guitar solo fueled instrumental album, but one your dad would probably enjoy. It also features bass by Glenn Hughes (Deep Purple, Tony Iommi, and more), and Chad Smith (Red Hot Chili Peppers, Chickenfoot, Will Ferrell's stand in on Anchorman, and more).

Let's end this week how week began with some fist in the air rock. People that have worn out the latest Iron Maiden album, or those waiting for the new Judas Priest record should give this a spin. With harmonized guitar licks, galloping rhythms, and epic vocals about battles, it's clear that this band was forged by classics. 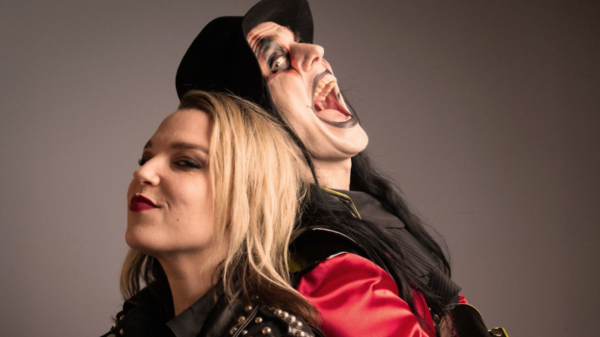