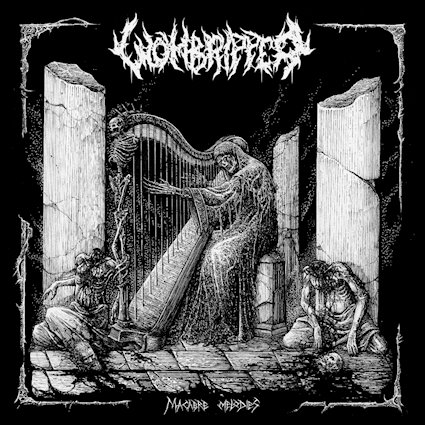 Within the walls of the Stewart-Panko abode, mentioning the name Wombripper will elicit wildly differing reactions. My long-suffering wife works as a midwife, childbirth educator, consultant, counselor, and a bunch of other real job/real world stuff that applies to birthin’ babies and not to metal in the slightest. Thusly, you can imagine the death glares and tsk-tsk-ing when the Wombripper moniker is inelegantly dropped into conversation by the knucklehead she regrettably married lo those many years ago, let alone when their music is rattling the windows.

Yours truly, on the other hand, first developed a man-crush on the band upon witnessing the promo photos accompanying their debut full-length, From the Depths of Flesh. There weren’t the usual photos of members staring blankly at the camera whilst standing in front of a wall. Instead, a black-and-white photo of a Boss HM-2 pedal on a stage somewhere was used in representation. Indeed the possibility existed that a tight gimmick was fronting some limp music, especially considering how inundated the metal scene has become with tepid bands aping classic Entombed, Dismember, Unleashed, et al. Luckily though, From the Depths of Flesh set a high watermark for classic Swe-death and just how dirty and filthy it could sound. A love affair was born, even if my wife probably loved me a little less for it. 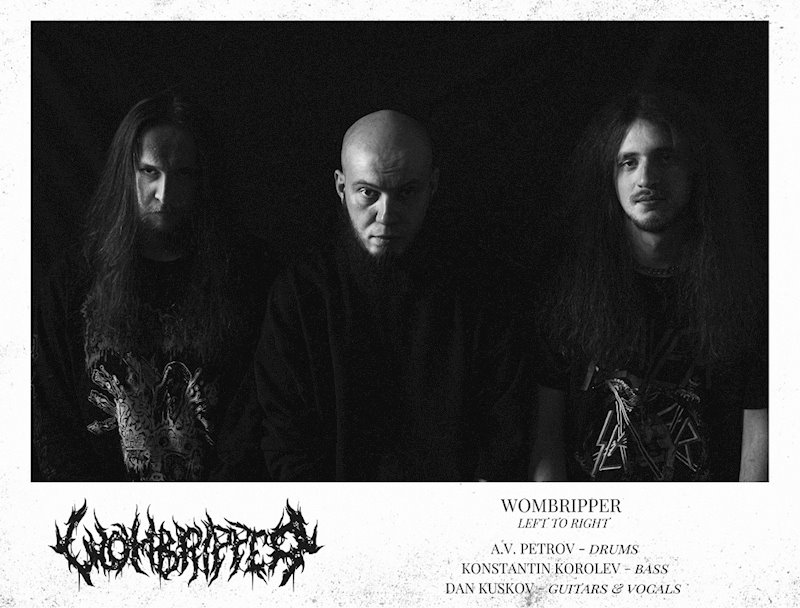 Having excised a guitarist following the release of their first album, the now-power trio from Nizhny Novgorod, Russia returns with Macabre Melodies, a furious barrage that holds all the categorical and elemental hallmarks of HM-2 death metal steady while injecting enough dribs and drabs to move them beyond the subgenre’s blueprint and the nuclear statement made with their first album.

It starts with the tone captured by guitarist/vocalist Daniil Kuskov. Whatever gear he employs in combination with the HM-2 has granted an exceptional sound which is at once bright and brutal, fuzzy yet clean, and possesses a special sort of enormity that provides the harmonies, melodic layers and dueling doubled riffs with a feeling of dense orchestration that’s apropos of the record’s title. Neither too shabby is Konstantin Korolev’s bass tone – thick and bloody like a rare steak with about as close to perfect a combination of low-end warmth and a gristle 'n' sizzle that borders on ‘70s rock.

Out of the gate album opener “Possessed by Unknown” makes it clear how his ability to work riffs with slides, sustain and locked-in staccato bumping gives the material an extra live energy push. Drummer Andrey Petrov does the same but in a different manner. The drums’ sonic mimicking of Clandestine will always be welcome in my abode – not so much by the person who sleeps on the other side of the bed – but it’s the unhinged lunacy with which Petrov attacks his kit and patterns that make for a gloriously unsheathed experience. Flubs, wavering meter, and the occasional sequence where what he plays doesn’t exactly match the arrangement make it seems like Keith Moon ripping his drunken heart and polluted liver out with Entombed. It should be pointed out that all of the above, my friends, are observations from the album’s first song!

As the record rages on, the trio demonstrates its skill at not just cracking domes and decimating basilar membranes with riffs that co-mingle ridiculous heaviness with a haunting melodic sensibility, but an understanding of how dynamic ebb and flow and how to massage the arrangement process. “Join Undead” and “Obscurity Depths” both naturally sway and swing from gunpowder blasting to borderline classic doom with Zamboni smoothness, the latter centered around a preposterously catchy earworm of a solo.

Everything mentioned above gets poured into “Shredded Corpse Remains” and “Already Dead,” two top-shelf displays of unhinged musical mayhem. The pair of songs are the audio expulsion equivalent of not only slowing down to rubberneck at a 20 car pile-up, but speeding to the next exit and returning as quickly as possible to take in the carnage again. “Devastation into Waste” rests on the interplay between a guitar that drastically lunges between tonalities and tricks—lots of palm-muted chugging wildly lunging into squealing harmonics—and an illustration of the forgotten power of bass to drive a song. Lest we forget the proggy components of “Church of Repulsion” and its use of loping Maiden-esque harmonies, spoken word breakdown, and a bass solo!

The only real quarrel with this album is how long epic closer “Fractures” takes to really get moving and “Macabre Void,” a texture-less noise interlude which sounds like the intro bit from “Raining Blood” ‘roid-ed up and extended beyond its effectiveness. Otherwise, Macabre Melodies stands as one of the finest displays of death metal, in general, and the Swe-death subgenre, in specific, as Wombripper put on a clinic, showing that you can teach an old dog new tricks and how a little ingenuity can overcome over saturation.

Now that my job is done, time to go antagonize my significant other by blasting this album one more time today.

*Reviewer’s Post-script: “Yeah, play that album again,” she teased, with exasperation in her voice. “Keep it up and it’ll be the only womb ripping you’ll be doing for a while…”