Album Review: BORIS Heavy Rocks (2022)
From a metal stand point, experiencing this album may not be what most metal fans look for when expecting a similar sound to or trying to match it to a genre.

Ever listen to a band that you enjoy, but you can't quite figure out why until you really spend some time with the album? This does not happen often, but in this instance, Without Waves seemed to accomplish that with me. With a sound that does not deserve to be categorized lest we limit ourselves in our perception of the music, Lunar has a draw that is reminiscent of the moon's pull, with title forces that ebb and flow as our ocean's torrents rise and fall.

When really examining the music being presented, and thinking of similar bands, there is no one influence that can be identified. Everything from U2 and Alien Ant Farm to Between the Buried and Me and Textures could be used to describe Without Waves. From jazzy innovative grooves, to straight up slamming break downs, the melodies used to tie everything together are neither harsh, nor complacent. As few songs struggle to meet a congruent, free flowing form, Lunar is a surprise I was pleased to experience.

From 2010 till now, Without Waves has put out a couple of albums. Lunar, being their first album signed through Prosthetic records, brings a focused and patient piece of writing that at times can off putting or harsh, only to bring the listener back around to their recurring atmospheric progressive post vibe that seems to be the backbone of Lunar.
As mentioned before, the melodic flow and journey of freedom that is evident on this album is the strength. That and of course the mystery box of genres that is used and combined to create a truly unique sound. From the clean singing to the harsh vocals, a solid melodic flow is clearly heard and practiced on every track. This theme makes the experience much more accessible where most experimental math-y bands no shortage of technical math-y music here) get lost in themselves while trying to find a structured theme that is rarely developed.

"Lost Art" is a personal favorite where space-like atmospheric guitar riffs levitate the calm vocals that were abandoned just on the previous track, to build a moody, more traditional post anthem that will survive the cluttered vault of catchy songs ensnared in your mind. From the repetitive catchy melody, to the slower paced but still creatively filled drums, this rock song delivers a passion often found in 90's rock that has indeed been a lost art.

From a metal stand point, experiencing this album may not be what most metal fans look for when expecting a similar sound to or trying to match it to a genre. You can't always be expecting some extreme solos and passionate gutturals, and Lunar capitalizes on the nontraditional. It does stand on its own, though, in the way that doesn't give itself boundaries. This, of course, is what most bands will say, but Without Waves is truly one band that can proclaim this with zero criticism. Lunar is not without its faults though. As balance and connectivity is found on each song, it failed to tie together all 9 tracks in a singularity I was looking for. With that said, it is obvious that this type of music orchestrated and tying the entire album together is much harder to achieve when compared to your more standard metal.

In this article: without waves 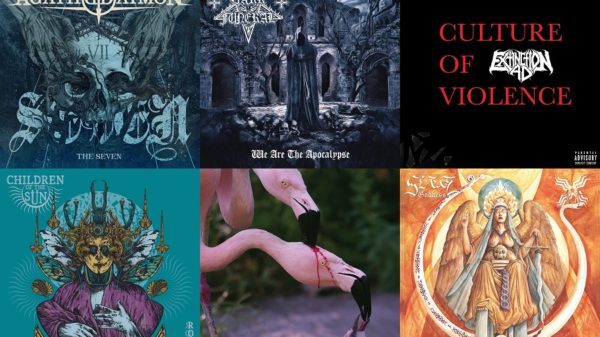 THE WEEKLY INJECTION: New Releases From DARK FUNERAL, WITHOUT WAVES & More Out Today 3/18

Plus releases from Agathodaimon, Children of the Sün, Extinction A.D., Friends Of Hell, The L.I.F.E. Project, Slægt, and Trench

Greetings folks, and welcome to another year end list from the Weekly Injection guy.Advertisement. Scroll to continue reading. This year, I didn’t intentionally lean...