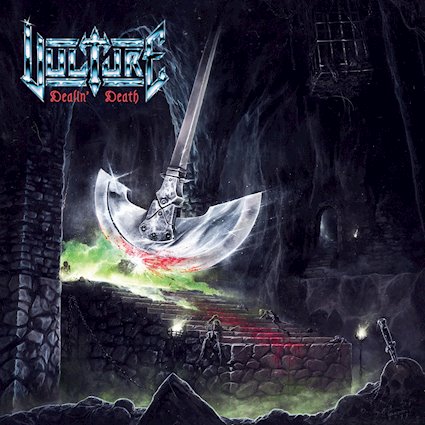 One of the few pearls of wisdom my parents bestowed upon my sibling and I outside those rare moments they weren’t allowing the boob tube to raise us had something to do with always giving people from your past the benefit of the doubt should you encounter them in the future. Look for and accept any positive changes that may have been made, but don’t be a blind pushover about it. Basically, grant second chances, but be careful with your forgiving and forgetting. To wit, here’s a list of past and present bands the members of Germany’s Vulture have dedicated their time, energy, and talents to: Beer Pressure, Bulldozing Bastard, Luzifer, Genocide, Hellhunt, Obsessör, Diabolic Night, Quintessenez, Blizzen, and Wifebeater.

Simply perusing the names of said list of priors, it’s a safe bet to say that the quintet that has congealed around the Vulture moniker (one of the eleven currently listed on Metal Archives) since 2015 have a keen interest in the thrash/speed/crossover of old with a splash of dumb humour, marked down with an ordinary streak often as uncreative as most of these band names, spelling job hatchet work and umlaut usage. Though, they are German, so give ‘em some latitude for probably doing the right thing there.

If we’re being honest, every one of metal’s subgenres is saturated to bursting with bands taking advantage of home recording and Covid obliterating live music and touring to foist themselves onto the ear fatigued public. This phenomenon isn’t necessarily pandemic-related because if there’s a genre that didn’t need a global health crisis to have an overabundance of folks vying for attention, it’s thrash/speed metal. Since the mid-‘00s, you haven’t been able to take three steps at a Death Angel show without some joker in pre-air Jordan basketball shoes and a shitty denim vest trying to sell you on the value and virtue of one second division band over another. I mean, Indestroy’s Indestroy is an average-if-not-decent album, but it’s not Hallows Eve’s Tales of Terror, if you know what I mean. With Dealin’ Death, Vulture has managed a collection of nine songs (and a throwaway intro) with one foot in the past and present while avoiding the majority of the trap doors that staunch traditionalists fall into in order to gain attention from those street-wise thrash fans who’d tout the value of Iron Angel’s Hellish Crossfire when they'd be better off rocking Atrophy’s Violent by Nature. 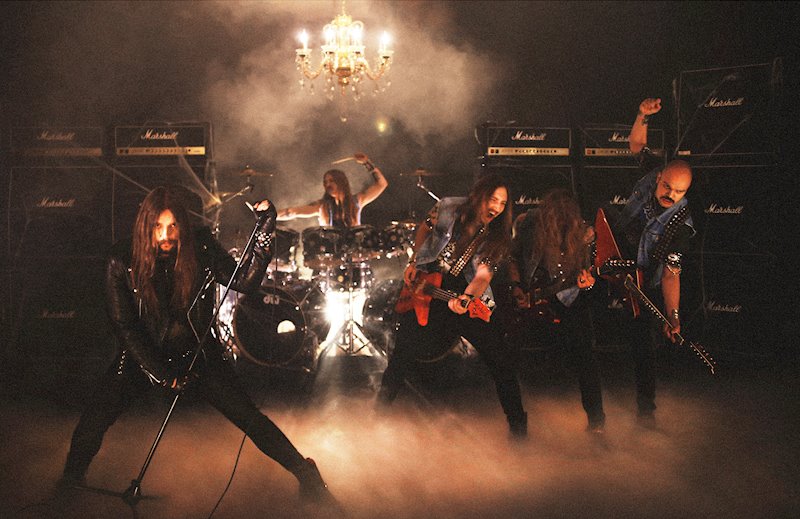 And while most of the subgenre’s tropes are simultaneously employed yet defiantly skated around, it’s vocalist Leo Steeler who presents as the overall weak link through this, the band’s third full-length. Not because he can’t sing, but precisely because he can, but spends too much time using his obvious talent to mimic his long list of heroes instead of carving out his own path. He’ll jump from a Mustaine-like snarl and some razor-sharp Mille Petrozza rasping to King Diamond glass shattering and Katon DePena cloud scraping at an uncalled drop of the hat. On the one hand, Steeler shows tremendous skill and broad range. On the other, he doesn’t make playing ‘spot the influence’ super-simple and his approach can be aggravatingly texture-less as he spits out changes willy-nilly, without cause and direction, and with little consideration of the riff he’s singing over.

On a track like “Multitudes of Terror,” he does a stellar job by howling out a couple of classic Tom Araya-ish/Show No Mercy screams that meld well with the bluesy leads and minor pentatonic riffs. However, in cases of achingly milquetoast and average salutes to by-gone eras, like the mid-paced stomp of “Below the Mausoleum,” his voice stands out for the wrong reasons. Overall, imagine Rob Halford taking phrasing lessons from Sylvain Houde (ex-Kataklysm) about how to unnecessarily fill space. This major league distraction leeches some of the inherent classiness, accomplished progression, and chips away at the uniqueness the band managed to squeeze out of Dealin’ Death’s riff school.

And there is plenty of full-bodied awesomeness on this record. “Malicious Souls” twists the direction of 1985 Kreator from balls-out thrash/death towards hair metal and classic rock and a super-energetic and infectious end while “Star Crossed City” drags Painkiller-era Judas Priest and classic Destruction through the greasy streets of Hollywood. The band’s proto-speed metal lobbing is combined with intricate staccato riffing and Voivod-like dissonance on the engaging “Flee the Phantom” which sees drummer Gereon “G. Deceiver” Nikolay directing the changes with a barrage of cymbal splashing and the title track runs Mercyful Fate’s Melissa through Agent Steel’s flux capacitor to a positive result, especially if you enjoy your speed metal trotting punctuated by random Schmier-like yelps.

A tip of the hat should be direct towards bassist A. Axetinctör. Throughout the course of the album, his playing is prominently pumped up in the mix and his attack and style provides the songs with dynamic movement and swagger similar to that delivered by Steve Harris’ gallop and Cliff Burton’s ability to tastefully fill gaps. This works almost in direct counteraction to the more off-the-rails performance of their frontman and quite possibly the most quizzically bizarre manner in which an album has ever been concluded with the Accept and Ratt on steroids riffing and anticlimactic fizzle out of “The Court of Caligula.” But like my parents would occasionally say, "you take the good, you take the bad, you take them both, and there you have…"