Album Review: SANGUISUGABOGG <em>Homicidal Ecstasy</em>
A split for the ages, this might get loud.

Primitive Man and Unearthly Trance – now THAT is a helluva one-two punch. It's doomy, fucked up, and brilliant. While this split features only one real Primitive Man track and two truly potent samples of the noisier side of their catalog, Unearthly Trance brings a ton of value of their own. It's a reminder they were one of the original masters of this scene. Ultimately, this is one of those splits that really captures the potency of a scene that works together.

After all, if we can walk together, why can’t we rock together? This is what makes this effort so thrilling. separate types of sludge come head to head and yet it makes sense. It’s great because it speaks to all this music has done and created. In Primitive Man's case, it's also a reminder of all this music can be. It’s a fucking trip from front to back, and that’s why I so dearly love it.

There is something truly intimidating about Primitive Man’s half of the split. Their sheer mastery of sound, the demonic world in which they voyage is freakish. The most powerful moment on their half might be the moments of pure silence on "Love Under Will" which are punctuated by cavernous drops of water and deep sea rumblings. It’s almost too much to contemplate. As for the more traditional offering, the track ‘Naked’ it’s more of what makes Primitive Man great in the first place. Punk-derived sonic obliteration.

As for Unearthly Trance, well, they're legends for a reason. They come at you with a well-merited sense of swagger from the start. Their opener, "Mechanism Error" is seven minutes of excellent sludgy doom. The guitar work is machine-like, potent in execution and thrilling from top to bottom. The dynamic forward motion throughout their half of the split is stunning and serves as a reminder that these guys still know how to write a song. Even the noisier aspects of their tracks seem to have a sense of tight control and dedicated concentrated brilliance. You find yourself getting punched in the gut by their rhythm section and loving it.

I actually sort of love how Primitive Man and Unearthly Trance can be so close to each other and yet so far removed. While on the one hand they definitely are both heavy doom/sludge bands Primitive Man’s sound is so much more… well… primitive and almost caveman like. Meanwhile, Unearthly Trance is delivering a thinking man's approach to the genre with their guitar histrionics and crushing clear-cut assault. They invoke dark spirits and bleak sound worlds together, but their individual approaches to doing so are fascinating. Primitive Man and Unearthly Trance both understand the core state of this genre and what it is supposed to do for us, both as members of the scene and lovers of great extreme art. This is the sort of release that reminds me why I love this music, and I hope it does the same for you. 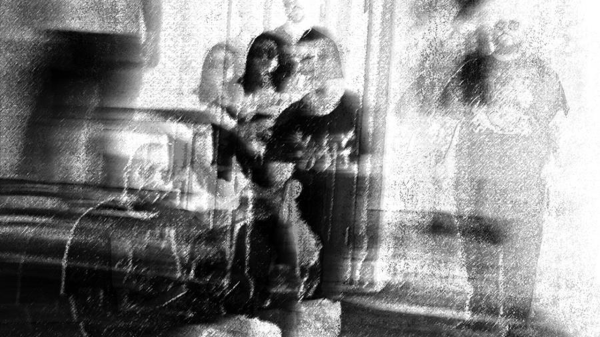