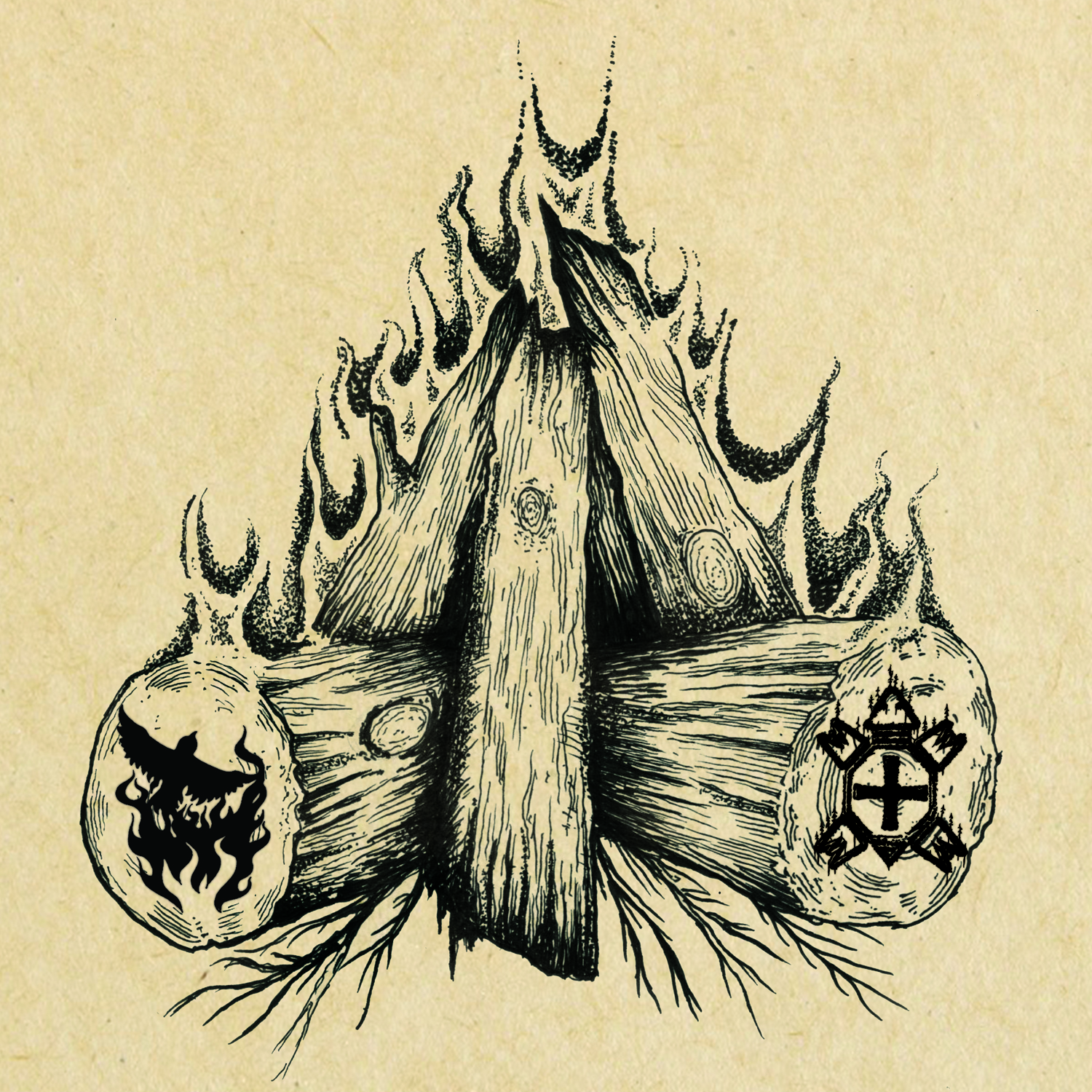 The allure of the split between Nechochwen and Panopticon starts long before the music. Each offer insight into their lives as an explanation of what you’re about to hear, with Nechochwen examining the history of their locale and Panopticon grappling with hospital stays and surgeries surrounding his young son’s rare heart condition. Both artists serve their stories up on platters of blinding black metal interspersed with their usual folkier elements to accentuate the lyrics in their furious sorrows, remembrances, and laying of the proverbial lands.

Nechochwen starts the split with two songs dedicated to the story of The Legend of Standing Rock.

Shortly before his death, my uncle gave me a book of local Indian and pioneer stories. One of these stories, “The Legend of Standing Rock”, became a favorite of mine. It takes place near a stone landmark in eastern Ohio. I do not know the story’s origin or historical accuracy but its message inspired the following two songs, “Of Wisdom and Prophecy” and “The Megalith.” I dedicate these two songs to the memory of Mark “Old Warrior” Stoughton.

“The Mingling Waters” is a “tribute to the land along two streams in West Virginia where my grandparents lived and to the various people who inhabited this land for thousands of years,” while “The Red Road” originally appears acoustically on the band's Azimuths To The Otherworld album.

Outlined with music to fit their form, Nechochwen brings these stories to life with ease. “Of Wisdom and Prophecy” lends adventurous, almost Iron-Maiden-esque grandiosity to lyrics whose stanzas include such lines as “With great wrath the earth shook, the megalith took flight / Crashing from the highest hill into the stream below.” This is coupled with an opening monologue taken from Tales and Stories of Yellow Creek by R.W. “Doc” Schilling regarding the anger of a great spirit and the helpless determination of man.

With this determination comes great loss. “The Megalith” slows things down and brings in more acoustic guitars backed by still-hard-hitting drums to herald the coming defeat. Much like the quickening flow of a raging river into its conflux with another, “The Mingling Waters” both starts and ends peacefully. There is gentleness, there is tumult, and there is gentleness again bolstered by another.

Then there's "The Red Road." The song is completely unrecognizable from its original 2010 iteration, having been turned into a relentlessly driving black metal track that seemingly alludes to the band's progress in its lyrics. With lines like "Looking ahead and re-writing the past / Tending the fields that will be sown at last" and "Seeking your truth, lighting the way / Waiting a lifetime for wise words to say / Mountains to climb, burdens to bear / An internal fire that's gasping for air," Nechochwen appears to address themselves and the never-ending quest to satiate oneself artistically.

As "The Red Road" fades, Panopticon's Austin Lunn emerges with his sole 19-minute track "Rune's Heart." The song opens with the sounds of a ventilator and a hospital heart monitor, immediately setting the agonizing scene of watching a loved one suffer. Lunn said the lyrics to "Rune's Heart" are explicitly a letter to his son Rune and are intentionally not published. He added the recording is dedicated to his wife Bekah, whose "heroic strength through this ordeal is what carried our family through that horrible month and a half of fear and doubt and the chaos that followed it. My love and gratitude for her is beyond measure."

"Rune's Heart" could've been instrumental and, with the lengthy explanation provided by Lunn, would still have gotten the point across. The heavier parts of "Rune's Heart" range from concentrated, seething anger to melodies that spiral out of control and teeter between feelings of hopelessness and fear. The acoustic parts are simply acoustic parts. Stripped of his usual bluegrass instrumentation or backing percussion, Lunn sits presumably alone with his guitar and sings his despondencies and frustrations into the room.

The ending of "Rune's Heart" is particularly notable. After a storm of rage-filled black metal nearly collapses your speakers into themselves, the song begins to slow. The rage wears out and the ordeal is over. Things come to a halt and under the fading cymbals and guitars come a small choir of vocals, an acoustic guitar, and a piano. This a respite, maybe even a small victory over a situation, but not one that came at no cost. Or as Lunn puts it, "Peace may or may not come. Wellness may or may not come, but hope is what gets us through and the way to find hope is to reach out to others."

Nechochwen and Panopticon sit comfortably in their sounds and use them as vehicles to tell new stories. This split is important for fans of both bands certainly for the music, but more for the stories. This is one to put on the turntable and read through the liner notes as the songs play. Put yourselves into the worlds both bands have created through their stories outlined by their music and become immersed.

In this article: Nechochwen, Panopticon