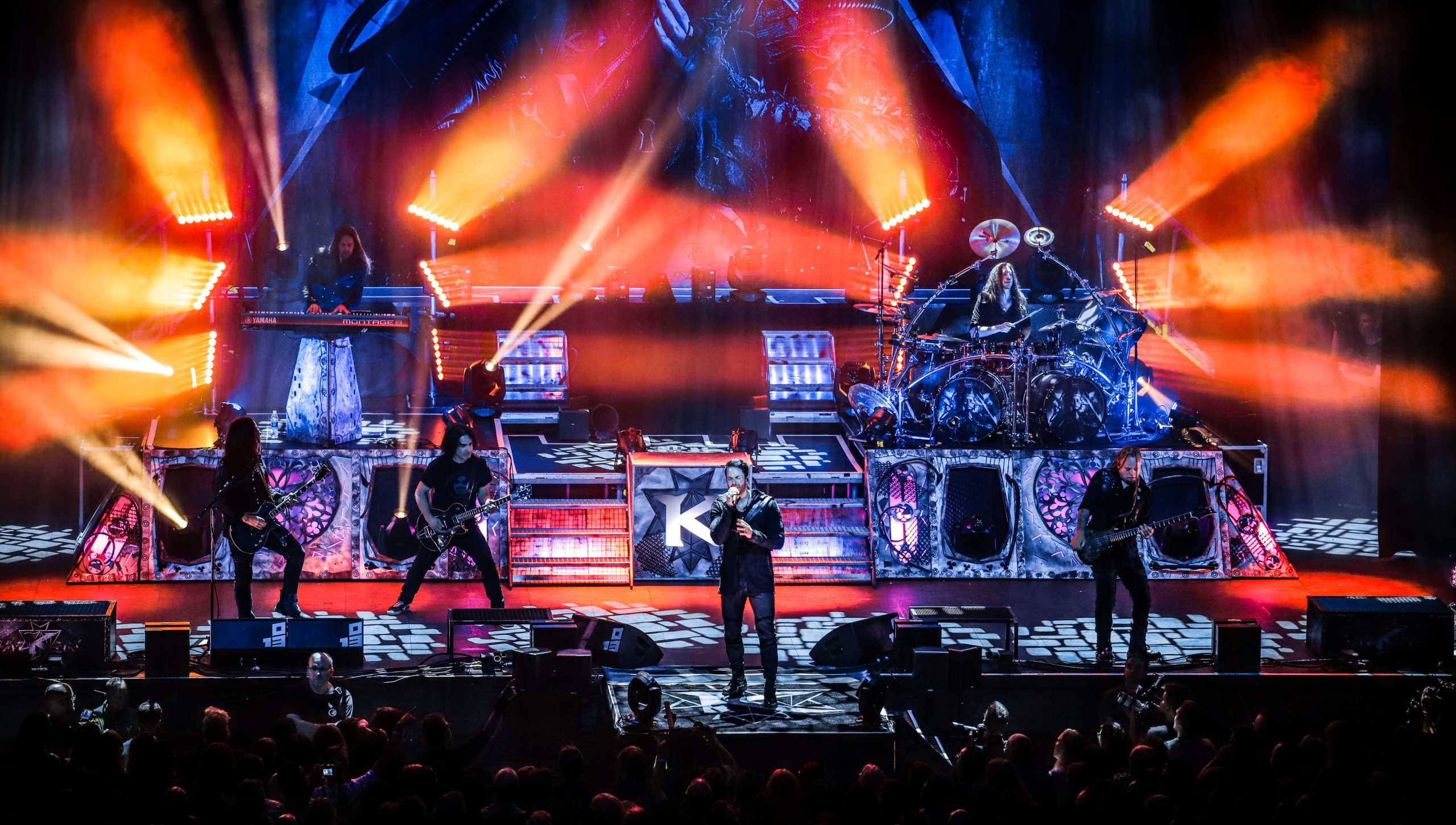 Kamelot have achieved an illustrious career over an impressive 30-some years. A band with this kind of longevity and fan-base practically owes it to themselves—and their fans—to make a live album encompassing some of the best that Kamelot has to offer.

For I Am The Empire – Live From The 013, each song pick is a carefully chosen delight for fans because it is a mix of some of their most successful, energetic songs. A few notable guest spots bring a fresh, welcomed "oh my god I can't believe she's here to perform this" energy. Celebrity appearances include vocalist Lauren Hart (Once Human) on "Phantom Divine," Sascha Paeth (guitarist Avantasia, Edguy) on "Ravenlight," Eklipse string quartet on "My Confession", vocalist Charlotte Wessels (Delain) on "Under Grey Skies", and the name perhaps most recognizable – Alissa White Gluz on tracks "March of Mephisto," "Sacrimony," and "Liar Liar." An all-star jam at the end with these powerhouse vocalists and instrumentalists working together on a few more songs would have been an awesome and welcomed addition.

Performance-wise, the songs ring pretty true to their album versions—which leaves a little to be desired in terms of the "magic" of live music. However, some music fans like to hear their favorite songs unaltered by unexpected interludes and improved solos – so whether or not to enjoy that element is left completely up to listener preference.

The most obviously impressive part of this live show is the strength of the vocals from Tommy Karevik. He's 99.9% pitch-perfect and on tracks like "Rule the World," he jumps to higher pitches without using his head-voice or slanting sharp. On "Insomnia," Karevik nails the unexpected notes with power and a signature warble. A little run at the end of "Insomnia" cements his vocal prowess into something that stands apart from a typical power metal vocalist – something playful and universal. "Under Grey Skies" is another good selection for those looking for a slower, emotional ballad-style vocal.

"Here's to the Fall" is another impressive ballad that's nestled fairly deep into the live performance wherein his voice stays strong and unwavering during the big home-run notes – despite being the seventeenth song into the performance. However, on the very next track "Forever", one can begin to sense vocal fatigue from Karevik. Because the rest of the set was sung with such accuracy, the slight decrease of stamina is noticeable. There is also a flub on the lyrics during this song. No big deal, unless "Forever" is your favorite song by the band (and it happens to be mine).

To be fair—each song, for the most part, plows right into the next leaving little room for rest for Kamelot. It speaks to the overall stamina of the band. It's impressive. Kamelot are solid musicians, driven by the seemingly effortless talent of guitarist Thomas Youngblood. Youngblood—Kamelot main-stay and founder—writes elevated music, providing Kamelot a huge platform for success. Kamelot's songs loan themselves to hugeness—huge vocals, huge intros, huge outros, huge sweeping keyboards, and huge soundscaping. The live performance is a great example of this practice, and these well-oiled musicians must put huge amounts of effort into their work to keep up with the demanding pace.

Overall, what's there not to like about I Am The Empire? There's a packed venue, responsive crowd, lots of black, lots of leather, good sound balancing, a seamless and never-ending snazzy light show, appropriate crowd hype and engagement, dynamic camera angles, pyrotechnics, and atmospheric fog. There's even a heart-tugging children's choir who perform with an adorable innocence. Good job, guys—that's a lot of people to perform in front of and a lot of pressure to be under—and still your vocals were totally spot-on! All of the "wow" factors are there and it seems that nary a stone has been left unturned.

Kamelot fans will thoroughly enjoy this release because of the song choices and the fact that it feels as though you've been chosen for box-seats at one of Kamelot's most anticipated live shows. Is the live performance a must-see for every metal fan? No. But is it a great way to spend a few hours? Yeah, it is. The release has polish – maybe too much polish. Iconic live shows have the ability to capture something akin to magic – something which cannot be seen or heard on a standard album. And while the performance deserves to be well-applauded for the massive effort, there's a lack of synergy in the vocal duos and an almost formulaic approach to making this concert a success. The machine-like precision this performance pulls off almost works against their favor. Perhaps a breath in between the songs or a slower pace would give the listener time to savor the moment better.

A big take-away from watching the I Am The Empire – Live From The 013 cements the impact of Kamelot as a modern power metal band. They've carved out for themselves an epic slice of the metalverse with straight-forward, love-lorn, meaningful lyrics and undeniably catchy and well-devised melodies. They're quite an accessible band, one that you could show your friends when they ask to listen to metal that "isn't that screamy stuff". I Am The Empire – Live From The 013 is an over-all enjoyable offering and a success for Kamelot that happens to bring the listener a much-needed feel of live music; a feeling we're all currently feeling bereft of in the midst of a global pandemic.