Album Review: FAITHXTRACTOR <em>Contempt For A Failed Dimension</em>
Iron Reagan and Gatecreeper are stellar bands that have come together to make one hell of a split

Combining Iron Reagan’s barrage of joyous crossover thrash and Gatecreeper’s terrifying death metal is like combining chocolate and peanut butter. Virginia’s Iron Reagan is known to keep things wild, giving their fans a good time with their blend of thrash and punk. Arizona’s Gatecreeper, on the other hand, brings forth a profound darkness, using guttural vocals and vicious instrumentation that makes for insane and nerve-racking adrenaline. The split between these two acts is undoubtedly a rush of pure excitement and brutality. With eight brand new songs—five from the former and three from the latter—this split effort boasts delicious new samples from two of North America’s brightest modern bands.

Iron Reagan opens the split with their rampant thrash. “Warning” is pretty straightforward in structure and is a terrific example of how the band creates fun, balls-to-the-wall crossover jams. The track’s catchy rhythm will have listeners headbanging immediately. “Paper Shredder” picks up the pace even more by tossing in breakneck guitar solos and frenzied drum patterns. It sounds like a metal grinder—the guitar tearing with ferocity—all while emitting an upbeat, entertaining vibe. The material eventually shifts towards a laid-back rhythm. One that is certain to get bodies moving in the pit.

“Take the Fall” unleashes the same crushing instrumental presentation. The song continues the band’s exploration into heavy, catchy grooves. “Proudly Unaccountable” –the split’s shortest song—follows suit. At its core, “Burn For This” remains faithful to the crossover thrash mentality, but plays around with varying guitar tones that shriek and wave throughout the material. Both guitarists Mark Bronzino and Phil Hall keep each track exciting, constantly switching up the flow of things through various uses of tempo shifts. Drummer Ryan Parrish and bassist Rob Skotis also include plenty of variety in material’s structure. Vocalist Tony Foresta, meanwhile, adds the finishing touch with some classic, in-your-face screams. For their portion of the split, Iron Reagan bring a terrific delivery of fun, adrenaline, and non-stop crossover.

The Gatecreeper work amplifies the insanity by shifting away from bombastic thrash to sinister death metal. “Daybreak” is a brief instrumental that builds tension for the following two songs. “Dead Inside” then tears in with shredding guitar work and ballistic drumming. Chase Mason’s vocals are a murky growl, breathing a darkened dread into the mix. As the song progresses, the instrumentation feeds into this sense of fear and anxiety. The weight of Sean Mears’ bass hangs over the material. The drumming and guitars streak with electrifying inflections, feeding into the madness of the vocals.

“War Has Begun” arrives with relentless delivery thanks in part to drummer Matt Arrebollo. He comes in like a roaring heat wave to devastate the track. Guitarists Nate Garrett and Eric Wagner continue to contort each note, emitting an aura of hysteria while taking some time to step back and offer a more gentle and somber nature. Every part of the band comes together to create a terrific and horrifying atmosphere. Gatecreeper undoubtedly forges a mix of pummeling and outright death metal.

These are two stellar bands that have come together to make one hell of a split. Iron Reagan bring their traditional crossover thrash—offering plenty of thrills and adrenaline—while Gatecreeper provides total, death metal annihilation. Both acts give their all, unleashing a delightful blend of fun and insanity. There’s plenty here to keep fans of both bands happy and itching for more. This split sincerely honors both the work and talent of Iron Reagan and Gatecreeper.

In this article: GATECREEPER, iron reagan 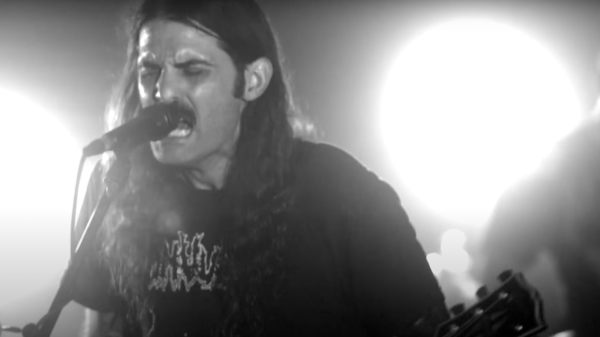 CHASE MASON Lays Out The Plan For A New GATECREEPER Record

Gatecreeper has been touring like a bunch of madmen throughout the past year, but don't worry! They've got a plan for their first new...