In the immortal words of C. Montgomery Burns, as spoken in season two, episode eighteen of The Simpsons, “You know, I’m no art critic, but I know what I hate and I don’t hate this.” Listen, I have no artistic talent—I can barely draw a conclusion—so believe me when I say my understanding of the visual arts is on par with my comprehension of the rules of cricket and why the late Stephen Hawkins bothered to wear shoes every day. But man, the cover of Death Velour, Ghastly’s second album, is frickin’ awesome! It creates a mood that’s as mournful and icy as it is engaging and morbid. And while Frank Frazetta’s disciples are likely picking apart stuff about lines, perspective, shading and other techniques I know sweet FA about, I’ll continue to take great comfort in the piece’s smooth transitions and early death metal air.

As goes the chilly death-obsession created by the cover art, so goes the band’s music and subject matter. The Tampere, Finland-based trio work the fine line between old-school death metal and mordant doom like the Wallenda family. The theme here is death; from literal, on-topic meditations (“Death by Mediation”) to philosophically poetic contemplation (“Whispers Through the Aether”) to an infusion of good ol’ gore (“Violence for the Hell of It”).

The riffing tends towards the chromatic and Mayhem-ic (did you catch that?) in “The Magic of Severed Limbs” where rudimentary riffs are accented by whipping pick hands and a chorus of demonic exorcism voices.  The pace is generally slow to mid with shifts coming from the drums entirely changing what’s going on underneath a riff. Example: “Scarlet Woman” takes a crawling doom/death riff and applies a standard rock beat before moving to a tribal tom pattern and speeding things up with low-key blasting. The result chills tombs and demonstrates the depth of simplicity in emotionally downcast hands.

Given the positive praise of the above, why the mediocre score below? That’s because ultimately, Death Velour stalls in its forward movement (read: goes nowhere). Initially, the band effectively haunts an ornate chapel. With repeated listens, however, that impact quickly dissipates. Main man and multi-instrumentalist, Ian J. D'Waters performs the majority of the album himself, creating a relaxed, sometimes sloppy feel. This laid-back looseness to the atmosphere eventually switches from dank and mouldy to aspirant and lacking for Ghastly.

The dearth of density will have listeners yearning for the appearance of some amount of oppressive power. Where dISEMBOWELMENT and Hooded Menace sonically relive the underbelly of dank darkness, Death Velour remains scratching at the coffin's surface. Where classic Celtic Frost begat a collection of memorable moments weaved into the fabric of extreme music, there’s nothing here infectious enough to worm its way into brains over the long haul. Except for that awesome album cover.

In this article: Ghastly 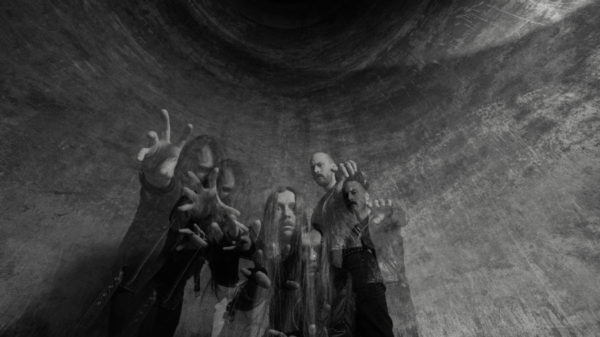 GHASTLY Warps Reality With New Single "Out Of The Psychic Blue"

Finland does death metal too well.

Finland is rich in death metal history. Long-standing titans like Demilich and Amorphis usually grab the headline. However, bands like Abhorrence and Convulse also made their name known in the early 90's....