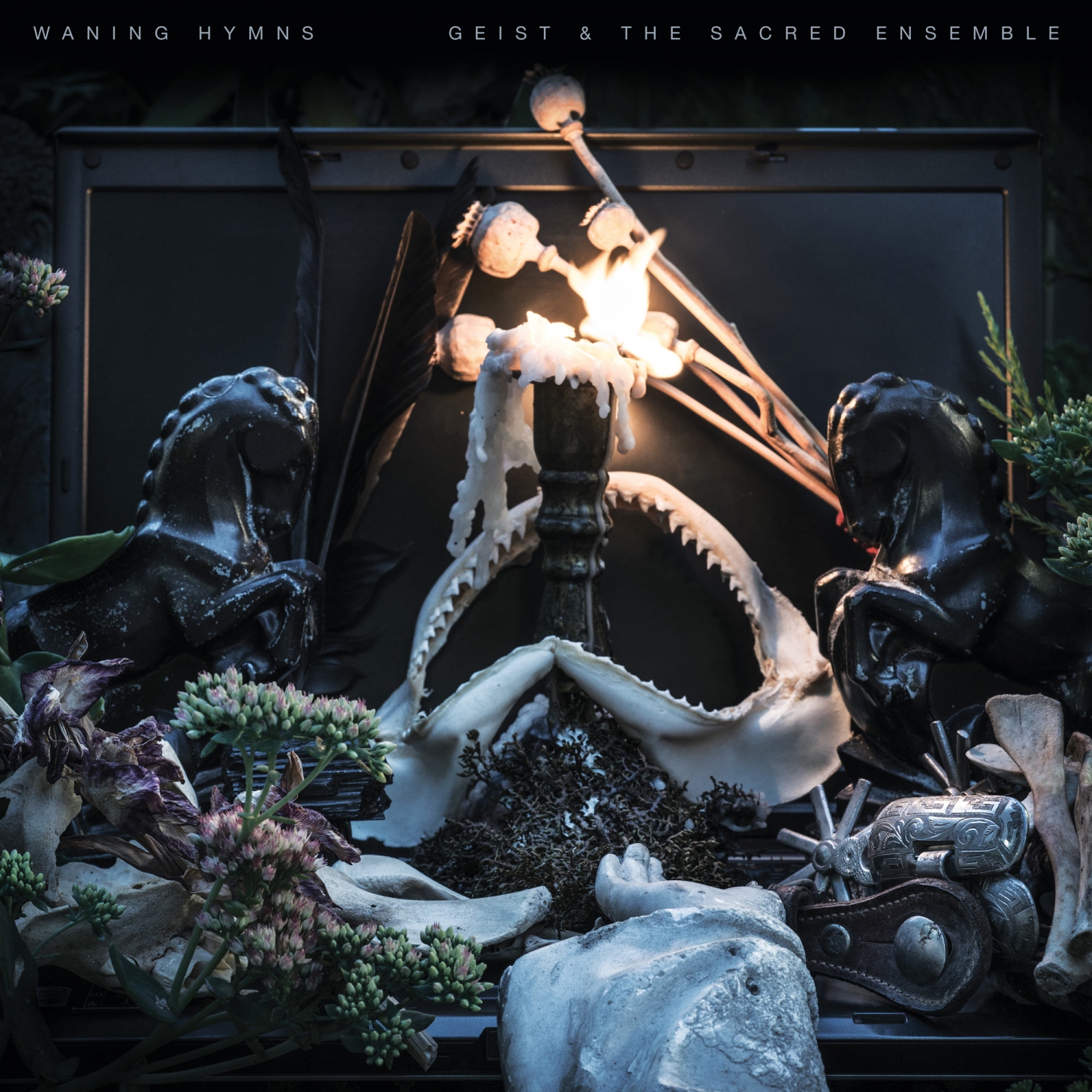 Since releasing 2016’s Within, Geist & The Sacred Ensemble have leaned into their improvisational tendencies with three Dig In Sessions. The Washington collective has always favored expansive journeys of shamanistic doom-folk, but some of these Dig tracks clock in at almost an hour. It’s high time for these guys to throw a smaller bone. Waning Hymns provides more directional songwriting chops for doomers dabbling in neo-folk. For those with the patience to fully submerge in the proceedings, the album appeals on a wavelength similar to Swans’ The Great Annihilator and the Americana albums of Seattle’s Earth.

Waning Hymns is a 41-minute album with only four songs. The album’s slow pace and glacial progression is best embraced like a steadily-rising tide of religious ecstasy. Indeed, frontman M. Sauder has always treated Geist & The Sacred Ensemble like a vessel for primeval spiritualism, which opener “Advaita” reinstates right off the bat. An undercurrent of Eastern folk music imbues a mystical vibe to the simmering soundscape of electric guitarist C. Segawa’s droning tremolo lines and Sauder’s resonant hollow body guitar strumming. 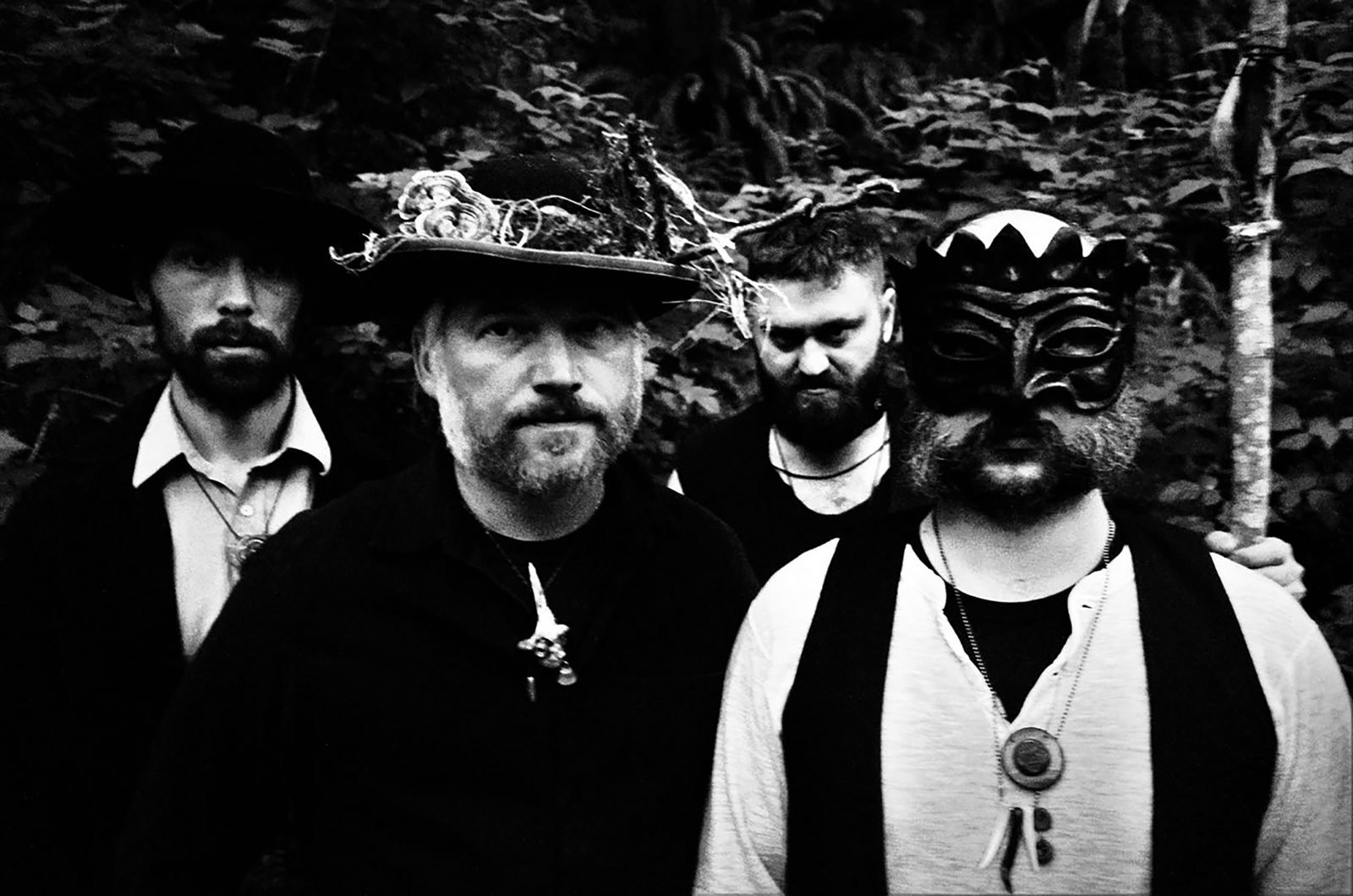 The rhythm section of percussionist S. Yoder and bassist C. Howe disturbs the sonic waters with jolting dynamic geysers, guiding the ominous chord progressions over an evolving crescendo. Sauder’s voice fluctuates between spoken word, baritone singing, and possessed drawls, weaving in and out of the sonic collage with emotive zeal. The aura takes a while to fully solidify, but its sensory grip tightens with each layer of ambiance that joins the oceanic arrangement.

For anyone wondering why this is being reviewed on a metal website, Waning Hymns is very heavy. The weight of the subject matter on “Volition” is clear enough, as Sauder takes aim at Western consumerism: “Distracted from our present state/ While our attention spans and self worth wanes.”

The band maintains a sluggish, dragging feel—sinking deeper into a cauldron full of psychedelic soup. While not very technical or punishing, there’s no denying the sonic leviathans that form around Segawa’s hypnotic, earthy guitar riffs and Yoder’s cavernous percussion. The instrumental foundation might be doomy alt-country, but post-rock dynamics and manic vocals take these sprawling songs to some mind-altering places.

It’s ironic that Sauder’s lyrics decry the demise of human attention spans, as the album itself becomes a test in that department. Dedicating the time to actively listen does pay off, but Geist & The Sacred Ensemble favor atmosphere above all else. This is most apparent on “Closed Eye,” a 6-minute modal drone piece. Sauder’s impressionistic clarinet soloing helps keep things interesting, but the wash of dissonant polyphony succeeds more in the headspace it creates than the riffs it curates. The textures develop an almost sentient quality, ebbing and flowing like a living, breathing organism.

The album’s overarching theme manifests most powerfully in the massive closer “Century Of The Self.” Sauder centers on a repetitious melodic line, detailing the dire consequences of selfish materialism. Yoder’s rumbling tom-toms and explosive gong and timpani hit guide the band into a post-rock take on Dead Can Dance, as Sauder’s shouts, singing and chants embody his fervent search for truth.

“What if our world has been built on false voices and dreams/ So we’d be reduced to wandering, consuming, happiness machines?” he utters like a zealot on the cusp of enlightenment. He ultimately rejects societal pressures, looking to reclusive individualism for as the better choice. The last six minutes of the song come to resemble an obscure tribal dance. Complete with Yoder's danceable tribal rhythms and Segawa's spiraling harmonic scales, the album's final crescendo celebrates freedom and embraces unbridled consciousness.

Geist & The Sacred Ensemble have returned to a sound that’s less challenging in size, but still easy to get lost in. Even so, this isn’t an album for casual listening. These somber, enveloping sound baths exist to cause spiritual epiphanies and open obscure pathways within the individual. I can't recommend it on the basis of catchy leads and hard riffs—because in many ways, Waning Hymns directly contrasts with the concept of music as a consumable product. In that regard, the album is a solid victory against the frivolities of mainstream culture.

In this article: Geist & The Sacred Ensemble