Album Review: THRESHOLD <em>Dividing Lines</em>
This split 10" from Halo of Flies Records is comprised of only two songs, but both tracks are eight minutes long. If you're familiar with Hexis or Primitive Man you already know what to expect.

Denmark's Hexis and Denver's Primitive Man don't share much common ground sonically. The former plays a rapid-fire blend of black metal and hardcore while the latter crafts raw, sludgy dirges. Initially, the idea of juxtaposing these two bands on a split EP sounded bizarre. However, there's a feral primitivism present in each group's work that ties them together as spiritual, if not, musical cousins.

This split 10" from Halo of Flies Records is comprised of only two songs, but both tracks are eight minutes long. If you're familiar with Hexis or Primitive Man you already know what to expect. Although for Hexis's contribution, titled "Excrucio," the band chose an uncharacteristically slow song instead of the brief blasts of vitriol that constitute most of the band's previous discography. In fact, the only Hexis track that rivals "Excrucio" in terms of length and slowness of tempo is "Inferis" – the final track of the band's excellent debut album from this past January Abalam. "Excrucio" is a good offering from the band, but it's not on the same level as anything from Abalam. It's a bit overlong even without the two minutes of droning feedback that splits the first half of the song from the second, and the lumbering riffs are suitably heavy but not very memorable. To their credit, this is still a good song. It's much better than the material most bands crank out for one-off split EPs like this. If Hexis's contribution was a bit of a curveball for fans of the band's previous work, Primitive Man's song is exactly what you'd expect if you're smart enough to have snapped up their 2013 Relapse Records debut. "When Getting High Is Not Enough" is a solid 8 minutes of grinding, discordant death/doom. Massive, off-kilter guitars squeal and crash into you in waves. Meanwhile, the rhythm section, consisting of a sludgy bass guitar and pummeling drums, pound everything in their path into the ground. All of this while Ethan Lee McCarthy wails like a homicidal lunatic. This is far and away the stronger track from this split and it serves as a great stopgap between their debut album and the sophomore release that will hopefully be arriving sooner rather than later. While both tracks on this EP are good, it may not qualify as a Must Buy release unless you're a fan of both bands already. Even then, the fact that Hexis's half of the split is a bit boring may dissuade fans from purchasing this on vinyl which is currently the only format available. Your best bet is to stream the EP via Halo of Flies' Bandcamp page and decide if you want to drop the cash afterwards. Below you can get a taste of Primitive Man's offering.

In this article: Hexis, PRIMITIVE MAN 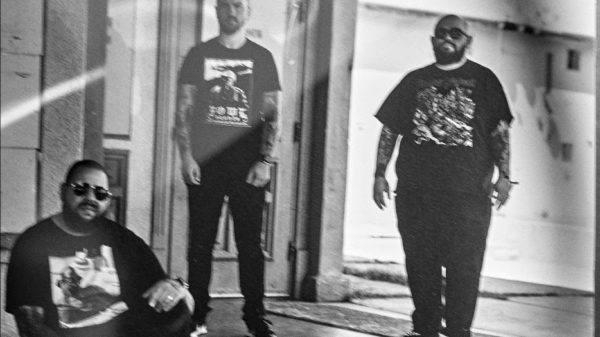