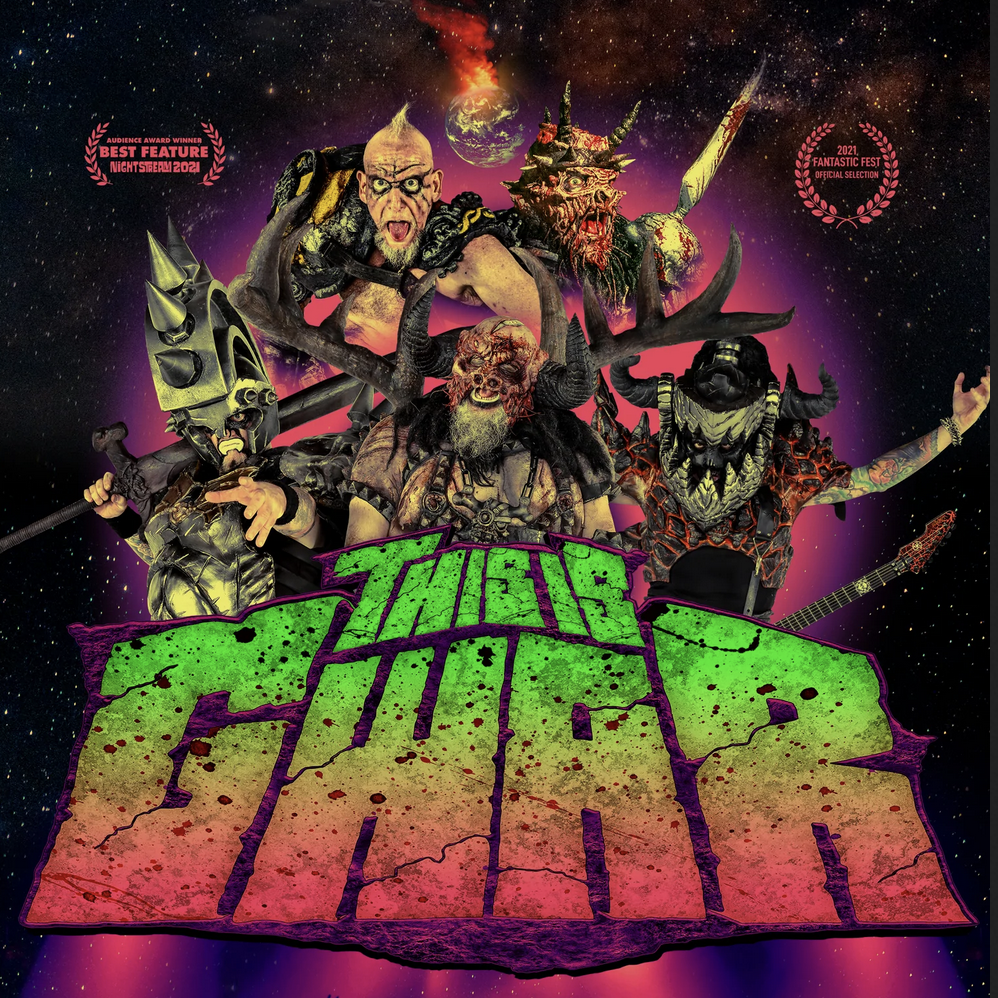 For anyone who owns Let There Be GWAR, the massive coffee table compendium that chronicles the history of Richmond's favorite shock rockers in exhaustive detail, this documentary from Scott Barber (The Orange Years: The Nickelodeon Story) will act as perfect accompaniment to a story that never gets boring. This is GWAR (subtitled: The True Story of the Sickest Band in the World) is an equally comprehensive, well-paced film that traces the Gwar tale from its beginnings as a gathering of disillusioned art students and sarcastic punk rockers channeling their frustration with '80s southern conservatism and mainstream arts and entertainment through countless internal and external obstacles to the band's unexpected present-day thriving and survival.

As expected of old soul artists, the original collection of idealistic drop-outs, horror and comic fans, sci-fi and indie film nerds, underground culture fanatics and DIY punk rockers went to great lengths to document their own shenanigans, even before it was de rigeur to take pictures of everything all the time. Having given the filmmaker access to their archives, This is GWAR corrals a shit-ton of photos and video footage from their early days living and working in a disused milk bottling factory and pre-Gwar punkers Death Piggy interspersed with new interviews with original and long-time members Hunter "Techno Destructo" Jackson, Mike "BalSac, the Jaws of Death" Derks, Mike "Blothar the Berserker"/"Beefcake the Mighty" Bishop, Brad "Jizmak Da Gusha" Roberts, Don "Sleazy P. Martini" Drakulich, Danielle "Slymenstra Hymen" Stampe, Colette "Amazina"/"Gwar Woman" Miller and others, through to newer members and archive interviews with all the folks who kept the story — which was, and continues to be, largely made up as they've gone along — alive and kicking since 1984.

The footage of the early days and initial creative process and gigs, despite being murky and often a case where someone forgot to set the tracking, is a treasure trove of glorious historical nuggets that allow even non-fans to appreciate where Gwar came from. The material also allows for a sympathetic look at how hard the artists and musicians worked to present a blood, piss, puke and cum-covered spectacle riddled with absurdist toilet humor. You pay witness to the dirty, messy, organized chaos (on stage and off) of Gwar's world from their formative shows in and around Richmond, skin of their teeth touring conditions and appearances on the shittiest cable access TV shows through to the progression that brought them to TV/MTV, the movies, being nominated for a Grammy and the cesspool of '90s talk show and Fox News late nights. Basically, follow the path to Gwar becoming a broad cultural phenomenon traced through their birth, growth, decline and resurrection via a prolific output of albums, videos, films, comics and merchandise detritus.

As the film makes it way, two themes cut through the fluids and fuckery. The first pertains to the ongoing, career-long internal battle between the musical and non-musical sides of the bands and those who took the lead on both aspects. Obviously, from the armchair quarterback position, it's difficult to understand why it has been so difficult for these two components of the Gwar empire to reconcile. Surely, they must realize that without one, a lot fewer people would care about the other. But, as the film illustrates, when you throw the admittedly strong and often unyielding personalities of Jackson and Dave "Oderus Urungus" Brockie into the same room (not to mention all manner of mind and body-altering substances), fart jokes and fireworks are the inevitable result.

Despite the unified art-film-music front Gwar presented to the public, there appears to have always existed a strong undercurrent of destructive tension between those members who wanted to branch out further into artistic endeavors. Creative control, whether it be of the music, non-music or the spectacle in general, caused rifts as spats and resentments developed about money, merchandise and recognition in a perpetual battle of wills and egos. In the defense of Jackson (who can come across as brusque and heartless, especially in how his acrimony towards Brockie hasn't dissipated, even after his passing), his initial idea for Gwar didn't really involve a band, but an indie sci-fi movie called Scumdogs of the Universe (sound familiar?)that morphed beyond movie making into the sociopathic circus most are familiar with. And in Brockie's defense, the music and live show may have been the ground source for the propulsion of the engine, but it also happened that it was the perfect forum for his oversized personality and sense of humor which fans cottoned onto. This made him the focal point which he relished in and ran with to the dismay of some of the other egos in the room.

The second theme revolves around just how connected to the Gwar collective, its work and accomplishments the members are, both those behind the scenes and onstage. The passion with which musicians, prop masters, "abject slaves" and the women "doing butt dances" speak of the project and the reverence they hold for it and each other (despite personal differences and screaming matches) is evident in the present-day interviews. The emotion comes rushing to the fore with the number of tears shed when topics shift to various people being kicked out of/leaving, getting shot (in the case of Pete "Flattus Maxiumus" Lee), Berks being diagnosed with cancer, or passing away (as in the case of Brockie and guitarist Cory "Flattus Maximus" Smoot). The thought that came to my mind as the story progressed was, "There's a lot more crying in a Gwar documentary than I imagined there would be!" But that's the sort of passion and dedication required to power this sort of lunacy and when significant pieces are torn away, the resulting reaction is as extreme as the comprising elements. And everything is advantageously and respectfully captured by the film makers, possibly for the first time.

It's also this drive that has powered the band to forge forward in the post-Brockie years. The film taps into an understandably downcast vein with the quick succession story telling involving Derks' diagnosis and the deaths of Smoot and Brockie, the latter had everyone (band and fans) thinking he whole thing was done. The film pulls a triumphant, understanding and hopeful air out of the last 5-10 minutes as it chronicles Bishop's return as lead vocalist and footage of them going forward, literally moving onward a pressurized tank of fake body fluids that anyone — including guest interviewees Weird Al Yankovic, Thomas Lennon, and Bam Margera — decked out in a white t-shirt should be wary of wearing to a Gwar show. At the same time, all involved would be proud to have as an unrecognizably stained badge of honor as they rally behind one of the most sizable cultural signposts in metal's history, whether they're thought of as a joke band or not. This is GWAR is available here on Shudder.