KEN Mode have attained a whole new level of pissed off with Entrench that I wasn't even sure was possible to convey in a recording. Right from the get go of "Counter Culture Complex" the band are right up in your face with coherently manic riffing rolled up into a ball of distortion that never seems to let up. It’s not all speed though; tracks such as “No: I’m In Control” and “Daeodon” bring a little less thrash to the table and instead stomp around with fuzzy riffs and lumbering drums to counteract being a one-dimensional snoozefest of a record. Then there are songs like "Romeo Must Never Know", which relies on a spacey theme that's heavy in a huge, Isis kind of way, and the haunting ambient closer "Monomyth" that seems to tower over you and smile menacingly at the end of your listening experience. If that sounds completely mental, that’s because it absolutely is… and it’s brilliant.

Entrench isn't a record to listen to in passing; it requires your full attention in order for you to appreciate all the complicated riffing and rhythms the band has to offer. Each instrument is usually doing something all its own to contribute to the architecture of the song, though there are points that nobody in the band is above playing in unison with one particular line if that's what the song calls for. It's an extremely heavy record that relies just as much on the music to make it heavy as it does the naturally roomy production, which adds a certain energy and frantic quality.

What KEN Mode have done here is nothing short of amazing. Entrench will keep you coming back for more even after a hundred listens; it’s a record that’s aware of when an idea is in danger of getting boring, and changing. It’s a record that knows not to string together a whole bunch of songs that sound vaguely similar so the listener has no idea where they are in the track list. Above all of that, it’s a record that can keep you guessing without going somewhere stupid for the next section. There are no gimmicky parts of songs that are thrown in there just to get you to the next riff, and the band never let the pure insanity of the music get in the way of their songwriting. 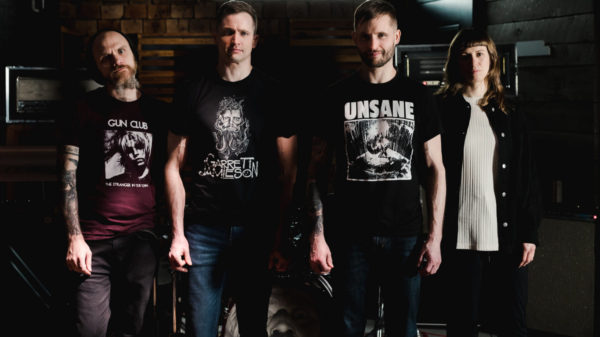 KEN MODE Trudges Into The Darkness On New Single "Unresponsive"

As dirgey as they get.