Album Review: CONJURETH <em>The Parasitic Chambers</em>
Anciients is a sleeping giant, and their latest album sees this British Columbia-based quartet continuing to refine their craft and inching ever-closer to becoming an awakened beast in the metal world.

Back in 2013, a relatively unknown progressive metal band called Anciients released their debut album, Heart of Oak, to an completely unsuspecting metal scene. Unbeknownst, I'm sure, to Anciients, it would become one of the most critically acclaimed metal albums of that year, and for very good reason; Heart of Oak was a masterwork in the tradition of progressive music spearheaded by bands such as Opeth and Mastodon, and exemplified a band that wrote brilliant songs and carefully-crafted compositions that, for any other band, simply wouldn't be possible.

Now, in 2016, Anciients have returned with their sophomore effort, Voice of the Void, an album that perhaps doesn't leave as strong of a first impression but is no less compelling. Building upon that which was explored in Heart of Oak, Voice of the Void sees Anciients continuing to fuse progressive song structures with furious and fiery riffs, punctuated by a natural and earthy production that captures the spirit of what Anciients is all about. If anything, Voice of the Void feels like a solid answer to the burning question that lingers in many a metalhead minds, and that is: what if Mastodon had continued along the path they started down with Blood Mountain?

That said, it's completely unfair to write-off Anciients as a Blood Mountain-era Mastodon rip-off. No, this quartet of caustic Canucks manages to secure a sonic identity all their own, despite the obvious nods to their forefathers. From opening number "Following the Voice," to the acoustic respite "Descending" midway through, all the way to "Incantations" which closes out the album, Anciients traverses many peaks and valleys throughout Voice of the Void, all of which are conquered with the expertise and grace of a veteran mountaineer.

Anciients manage to stand out from the pack because of the many different influences they bring to the table. There's not really any other band in metal right now who manage to so seamlessly blend a rich prog base with a rock-solid stoner/doom backbone. It certainly doesn't hurt that Black Wizard and Dead Quiet share members with Anciients, but it's clear that this project serves as a deeper creative outlet for guitarist Kenneth Cook and bassist Aaron Gustafson. Tracks such as "Pentacle" and "Ibex Eye are staggering in their execution and have no trouble turning a bored ear; harsh growls give way to melodic singing, while the juxtaposition between airy guitar passages and totally headbangable riffs give these songs a broad range of dynamics.

As great as Voice of the Void is, it's not a perfect album. Most of what Anciients achieves works very well, but some may listeners may find themselves drifting off during some of the longer tracks. Also, they sometimes tread the line between style and substance, as some parts feel recycled from Heart of Oak. Still, these are minor qualms of an album that definitely deserves the undivided attention of any fan of extreme music. Anciients is somewhat of a sleeping giant; they aren't pretentious by any means, and it's apparent that they're making this music simply because they want to, and that's it. Tours with Intronaut, Death and Lamb of God haven't gotten to their heads, and Voice of the Void is proof of this. If Anciients continues to refine their craft as they have on Voice of the Void, then this sleeping giant just might become an awakened beast, rearing to take the metal world by storm. 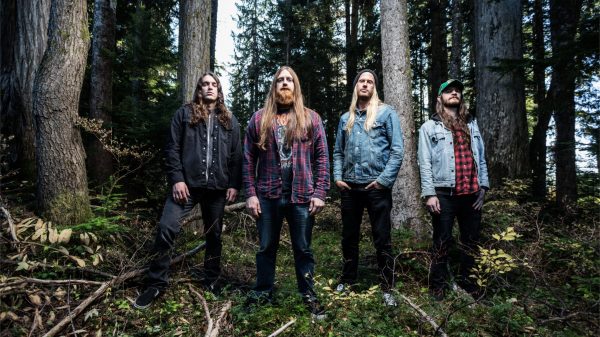 Goatwhore are planning on releasing a new album, Vengeful Ascension, on June 23rd via Metal Blade and to celebrate, they're spending the most of June on...

THE WEEKLY INJECTION: New Releases From THE DILLINGER ESCAPE PLAN, RED FANG, and More Out Today – 10/14

This edition features a diverse offering of power metal, progressive, fuzziness, and more! To the metals…Advertisement. Scroll to continue reading.