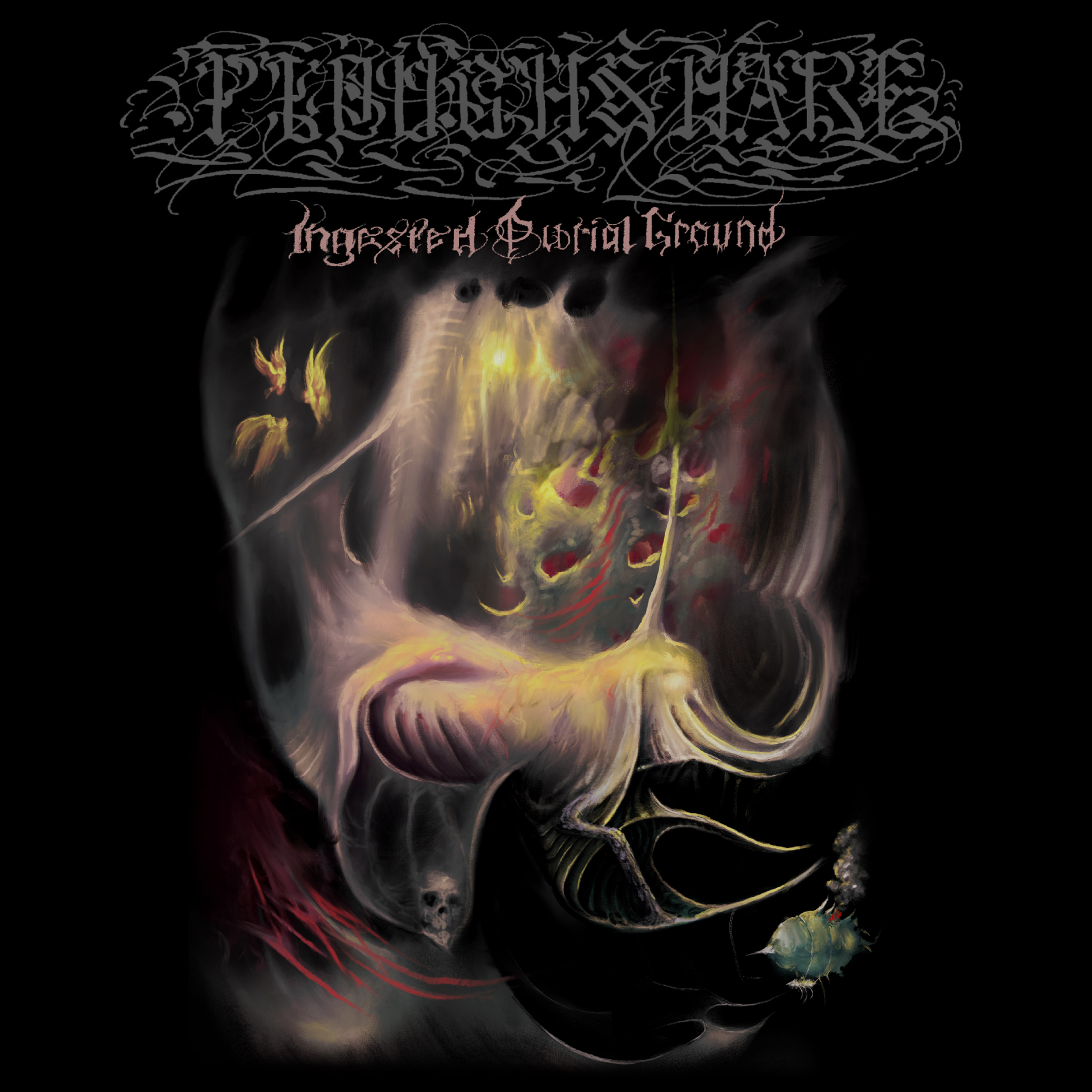 Ploughshare's new album raises some interesting questions for fans of black and death metal. What do you get when you take the essence of what makes something sound "black" or like "death" and extract the obvious metal elements? Can something still be recognizable in those forms if you remove the obvious signifiers that tell you: "You are listening to a metal band right now"?

On the band's latest release, Ingested Burial Ground, Ploughshare creates a mood that's very reminiscent of a standard, straightforward blackened death metal album. However, the incorporation of electronic and noise elements introduce an avant-garde aspect that leaves the work's shape ambiguous and harder to define.

"The Cold Horror is Clear" and the obvious standout track "Divulging Bees, Spiders, and Scorpions" follow clear black metal patterns for tempo and attack, but they refuse to stick to those patterns. Death metal rears its rotting skull on the absolutely nightmarish "An Uneasy Dread Rose." While the band certainly isn't the first to incorporate harsh noise flavors into the cauldron, the results here don't quite taste like anything else out there.

To be sure, there's definitely some familiar echoes of industrial metal that wind up coming out of the wash here. There are several moments that recall Godflesh, KMFDM, Ministry and even Nine Inch Nails when Trent is at his most discordant ("Two Awful Creatures" is haunted by the specter of "Reptile"). These echoes ring even louder on the album's second half, which contains remixes of the first half that are rendered even more industrial and amorphous.

If the first half of the album is the bad trip, the second half is the nightmare you have immediately after you come down. While the primary version of "Divulging Bees, Spiders, and Scorpions" is almost catchy in its approach, the Xeno Chemist remix is smashed and deconstructed so much that it might as well be a totally different song. In this sense, the second half represents the complete extraction process, the black and death metal vibes rendered pure and yet somehow unrecognizable through the filter of industrialization.

It's this act of alienation from the original inspiration that makes the remix side less accessible but more interesting. Likewise, this stylistic alienation does a good job at conveying part of what the band was trying to express here in the first place. After all, when you look to the band's socials for a description, all they give you are two ominous words: Sepulchral Din.

Oh, and the Alex Macfarlane remix of "An Uneasy Dread Rose" is weirdly danceable. Well, if you want to try and clear the room at the house party and have it all to yourself. The band contains multitudes, and they're all really scary!

In this article: Ploughshare