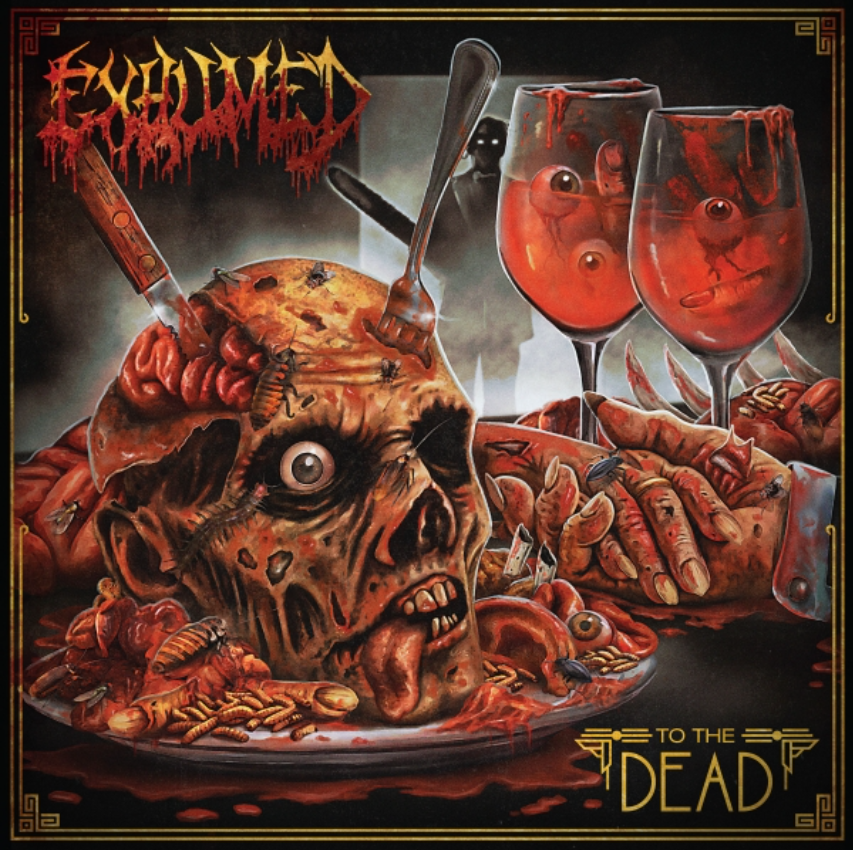 The "Gore Metal" pioneers Exhumed are back with their ninth studio album, To the Dead. This effort is their first original full-length record since Horror (2019). To the Dead comes out on Relapse Records this October 21, so make sure to purchase your copy in time for Halloween. Although it's rancid and maggot-infested, To the Dead is a delightful treat that does not pull any cheap tricks. It serves up exactly what you might expect if you happen to be an optimist. This release proves that Exhumed are still kings in their field.

To the Dead may be old-school, but it feels as fresh as the raw meat of a new victim — a product of the disastrous year that has been 2022. This offering is a celebration of Exhumed's history. Thus, To the Dead would definitely serve as a great introduction to new fans. Yet, it is also bound to prove a rewarding musical experience for loyal listeners.

For To the Dead, Exhumed invited ex-members Leon del Muerte, Mike Beams, Bud Burke, and Matt Widener to assist with songwriting. At this point, vocalist and guitarist Matt Harvey is Exhumed's only original member, although vocalist and bassist Ross Sewage first joined the band in 1994. Exhumed unleashed their first demo in 1991, by the way. Unfortunately, the outfit took a break in 2005. However, Exhumed gave fans cause to rejoice in 2010 when they reemerged to spread even more pestilence and depravity.

Don't approach To the Dead thinking that it will leave you with a sense of doom and gloom. Exhumed is from San Jose after all. This Cali band is in the business of turning putrefaction into a source of entertainment. The humorous Exhumed excels at making light of the darkest subject matter. To the Dead is loaded with adrenaline. This terrifying journey is not an album to experience while intoxicated. That said, if you have even a tad of booze in you, the opener, "Putrescine and Cadaverine," will make you fly into a Dionysian frenzy.

To the Dead is a highly professional record without any weak points. Despite giving you a cannibalistic taste of madness, it forms a coherent, well-organized whole. Each song flows nicely into the next. Although the album never loses its brutal edge, To the Dead manages to change things up often enough to keep you hooked. There are parts that are catchy and surprising. For example, the penultimate track, "Defecated," is a bit of an earworm. The same applies to the closing tune, which will make you endlessly call its name: "Disgusted."

The guitars menace and seduce as you hurry to join them in their Danse Macabre. The raspy vocals, grunts, and low growls will make you feel as if you are in the middle of an overdose. You literally hear lifeblood draining on the second track, "Drained of Color": "Fluids vacate your hollowed figure. Deathly dolor, drained of color." The fourth foul number, "Rank and Defiled," is an album highlight, owing to its musicianship.

Allow Exhumed to suck you into their nightmarish, bloody vortex. In their quest to be "Lurid, Shocking, and Vile," Exhumed has left "No Headstone Unturned." To the Dead may leave you "Disgusted," but it will also bring out your very best serial killer's grin. "Necrotica" awaits!