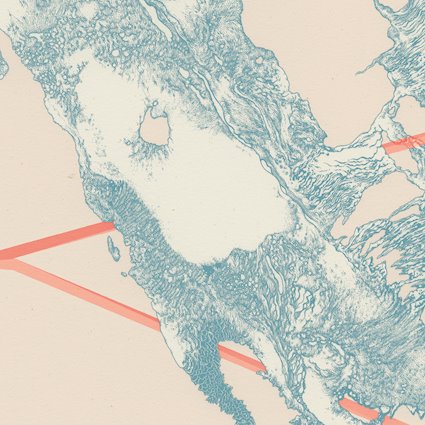 In these waning days of humanity, democracy, freedom, clean air, good taste, low class, and sensible shoes, it’s great to be able to have pleasant surprises serve as a beacon of light to show that not everything is a flaming dumpster fire of horse shit. Whether it be your favourite sporting organization achieving that elusive post-season spot, finding a ten-spot on the ground, or discovering that the Total Recall remake wasn’t half bad, it’s great to be able to keep on the sunny side before our lungs turn black and the urban battles against too-much-belly-and-not-enough-neck, autocratic non-thinkers commence.

Personally, your goofy hack of note is taking extreme pleasure in the discovery of these Swiss avant-garde freakazoids. Although Extinct is the quartet’s fifth album and yours truly is admittedly about as late to the game as one could possibly be!  A lineup featuring drums, bass, electronics, bass clarinet, and violin is absolutely non-traditional when it comes to the creation of dense peals of thundering heaviosity. However, Convulsif take an inspirational strip off of the likes of GOD, Painkiller, Godflesh, Swans, Napalm Death, Naked City, and SunnO))) in making undeniably oppressive noise via weighty tone, incisive distortion, and dissonant unease.

Whether they’re burrowing through passages at death metal tempos or laying down sonic concrete slabs at a slovenly pace, the thrust of Convulsif’s sound is comprised of a gritty bottom-end bass punctuated by sharp, snappy drums over which mangled horns ooze, strings shriek, and/or atonality gets fired like buckshot from the hip of dudes who grew up on equal amounts of doom metal, grind, free jazz, post-punk, the complete Tzadik catalogue, The Who and Melt-Banana. After all and sundry is stirred into a copper pot, the soupy melange is poured with extreme prejudice over conventional ideas of “heavy” to create an intellectually devilish thudding.

Some tracks on the band’s latest record do all of the above at once. “Five Days of Open Bones” starts off with a virtually inaudible wisp before Loïc Grobéty’s bass pounds like a slo-mo jackhammer carving into obsidian while notes of John Zorn gently wheeze prolonged single-note melodies. At about the halfway point of its 12-minute running time, the track slowly builds with screeching soundscapes and an increasingly frantic rhythm section before climaxing in a flurry of classic Metallica chord progressions (think “For Whom the Bell Tolls” and “The Thing That Should Not Be” type menace) and a burst of insect-flight pattern spazz-core. The track is a truly magnificent combination of pseudo-symphonic, downtown jazz, and dive bar extremity and essential listening for freaks and geeks alike.

Other tracks take a different dynamic tack. “Surround the Arms of Revolution” employs a thudding Swans-like rhythmic sensibility with the clarinet oozing a mix of hazy melody and scathing blurts rooted in GOD's criminally underrated tour-de-force The Anatomy of Addiction all delivered via a potent, heart-thumping mid-tempo march. On the other end, “Feed My Spirit Side By Side” occupies the purgatory between the street fight beatdown of Dillinger Escape Plan and the languid moan of Morphine.

Extinct runs a mere four songs and 25 minutes, never overstaying its welcome, but offering enough of a balance between knuckle-sandwich-to-the-throat power, gallery-ready esoterica, and avant-garde exploration. It’s an album that makes its presence known quickly and with a deep imprint and possesses the density and layers to have listeners discovering something new with each spin. I still can’t believe Convulsif has flown under my personal avant-noise radar for as long as they have. How Extinct compares to the band’s previous works, I don’t know, but you can bet that an exploratory commission has already been formed – with this latest masterpiece blasting in the foreground – in order to right this egregious wrong.

In this article: Convulsif, extinct