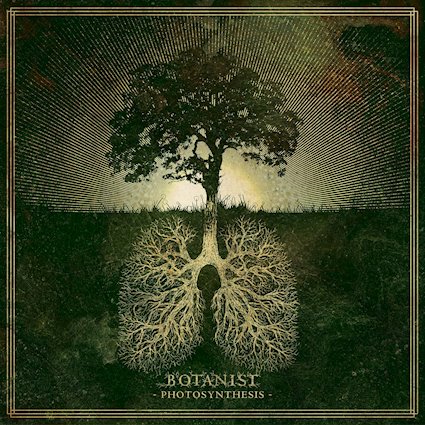 The Botanist would have a field day in my neighbourhood! Head tree hugger, Roberto “Otrebor” Martinelli has previously stated that when the time comes to expel melodic, avant-garde, post-black metal from his creative well, he “channels an entity within that’s been named ‘The Botanist,’ a character whose perspective dictates the content of the music and lyrics. The Botanist holds a romantic view in which plants reclaim the Earth after humanity has killed itself. He’s trying his damnedest to bring about the end of humanity because humanity is destroying the natural world.”

Were I to chaperone Martinelli around streets, boulevards, courts, and cul-de-sacs in proximity to the House That Metal Built And Pays For, it’s easy to picture the rapid emergence of a wide and sheepish “I told you so” grin on his mug. ‘Round these parts he would witness microcosmic evidence of Earth’s reclamation process in action as local coronavirus restrictions have presumably stemmed the ability of many of my neighbours to access paving companies with any promptness. That, and/or a blip in the driveway sealant manufacturing/supply chain, has transformed many of their ridiculously elaborate driveways into miniature jungles as weeds, grass, and other foliage have broken through cracks in the concrete, extending beyond the surface and stretching out towards life-giving sunshine. 'Take that, humanity,' laughs Mother Nature, with Otrebor at her side. Anyone else have “Ruined Suburban Driveways” on their 2020 Apocalypse Bingo cards?

For those outside the loop, Botanist is Otrebor’s decade-old project in which he uses an electrified hammered dulcimer as the main instrument in lieu of traditional guitars. In addition, each of the previous ten or eleven releases has thematically focussed in some fashion on plants, flowers, trees, verdancy, and the like. Admittedly, even after this many albums in, it’s still a trip to hear someone using the banshee black metal style to passionately screech out terminology more appropriate to a phytology textbook. But if you can’t generate enthusiasm about the high-speed gutting of the vegetation on our only home—despite what Total Recall tells you, life on Mars isn’t going to be that cool—then what else is there to get passionate about? Black metal has already symbolically killed religion, Jesus, his minions, and houses of worship a million times over.

Joining Otrebor and drummer Ron “Daturus” Bertrand on Photosynthesis is bassist Tony Thomas who provides a warm, progressive rock-rooted rumble that spends as much time cracking out lines that strut in homage to Geddy Lee and Rush (“Water”) as ripping away like many of their west coast influences and brethren like Ludicra, Weakling, Bosse-de-Nage and Hammers of Misfortune (“Chlorophyll”). There are a couple of moments in “Light” where the skittish and busy bass work does an Olympic medal-worthy balance beam routine between sublime tech-fusion and a near-collapse into off-kilter clutter that are bound to be best appreciated by musicians. On the opposite end, “Oxygen” has a Baptist church-like quality to the choral voices and up-tempo verses before it tapers off with shimmering post-metal and an epic, concluding dirge. And if you ever wondered what a collision of melodi-punk, power metal, and arpeggio-heavy post-black metal would sound like underpinned with an atonal drone then “Palisade” has the answer.

What’s most striking about this latest album is its full and fleshed out overall sound. In large part, this is the result of Thomas’ low-end embrace and the sharp, yet elastic, drum sound Daturus is afforded. The rhythm section works in seamless accord with the dulcimer’s baroque plinking, itself projecting with powerful sustain as it cranks out riffs, melodies and peals of dissonance underscored by keyboards and layers of vocal tracks. Not the least, credit should be given to Dan Swanö who, from the producer’s chair, managed healthy doses of instrumental separation and clarity and weaved it together with punchy tones and a cinematic air that results in something undeniably massive. Sure, the whole concept and execution is still something seemingly designed to flip orthodoxy on to its noggin’. Indeed there are brief moments in which instrumental limitations are glaring and impact songwriting decisions, like in “Dehydration” where parts appear to empty out and seem lost. Still, not only is it good to see Botanist upending extreme music norms, but continuing to move forward despite their own self-imposed, if not isolating, head start.