We needed a wonderfully absurd story to get through our Tuesday, and thankfully the vocalist of Last In Line, a Dio tribute band has provided us with one. He claims the apparition of Ronnie James Dio appeared last night while his band were performing.

What a coincidence that the apparition of Dio would be hanging out a tribute show to him (a bit egotistical, no?) but this is a good tale to tell, and tell he did to Blabbermouth:

The brother of LAST IN LINE singer Andrew Freeman, who has previously fronted HURRICANE and LYNCH MOB, claims that an image believed to be an apparition of Ronnie James Dio made an appearance on the stage during LAST IN LINE's first-ever concert, which took place this past Saturday, August 3 at Slidebar in Fullerton, California. Raymond Freeman Jr. tells BLABBERMOUTH.NET, "I just came across it while looking at photos from the last gig. Call me crazy, but it somewhat apears to be Ronnie James Dio just above [LAST IN LINE guitarist] Vivian Campbell. Just weird… Ghost??? Weird lighting??? Not sure, but it's there and pretty creepy."

Raymond added on his Facebook page: "The moment Ronnie Dio came through this past weekend… Watch the video [see below]… Right when Vinny [Appice, LAST IN LINE drummer] goes too long on the snare fill… Look at my brother's face… That's Dio… channeling through my bro who I have now tagged Di'omen… Weird shit like this runs in my fam. Call me crazy."

Ok then, Crazy! But wait, he made a convenient collage to further prove his point:

If you watch the video you can see Dio hovering for the entire song (or perhaps the more sane observation of it's just a fucking stage light!)

Well congrats to Last In Line for getting the most publicity they've ever gotten and all they had to do was tarnish the good name of the heavy metal icon they pay tribute to every night.

Let's get the real Dio in here to show us how it's done!

In this article: dio, last in line, ronnie james dio 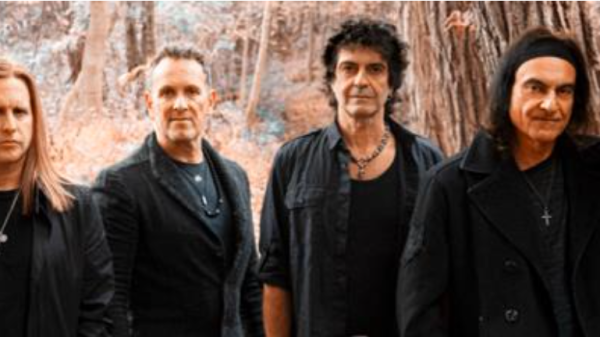