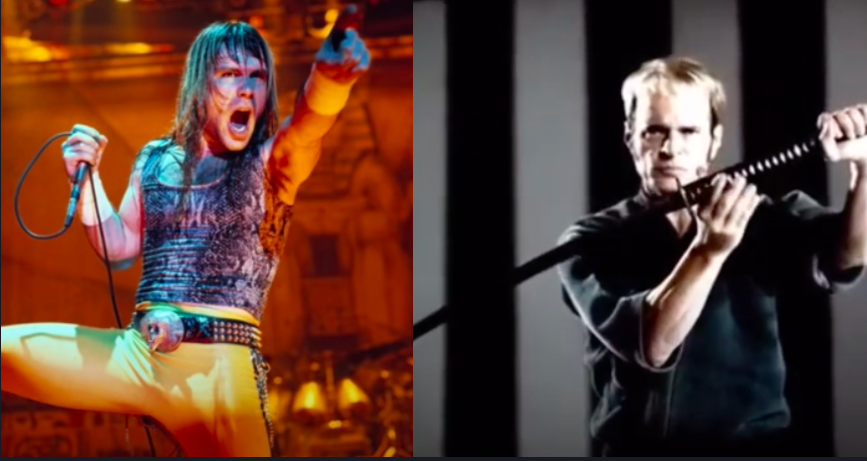 "Fencing is the most amazing sport in the world as far as I'm concerned. Most other sports have participants who are motivated by money. There's no money to be made in fencing, so you know everyone is motivated by the sport. That's incredible when you think how dangerous fencing can be. There have been incidents when a foil has pierced the mask of a participant and killed him. That keeps you on your toes. But the potential danger is also what I find appealing about the sport. It's so totally different from rock and roll; It's just you and your opponent. In fact, I would gladly give back all my gold and platinum albums for the chance to win an Olympic gold medal in fencing."

Any fan of Iron Maiden knows Bruce Dickinson excels as many things in addition to his decades-long gig as Maiden's vocalist. He is a cancer kicker, widely published author, an experienced pilot, and an accomplished fencer who in 1981 (at the age of 23) was ranked as the seventh-best fencer in Britain. It has also been rumored that during downtime on tour with Maiden during the mid-80s, Bruce would break out his fencing equipment and challenge crew members (or other "unsuspecting souls") to fence with him. He's even dueled on stage with Eddie. In addition to giving Maiden's crew and mascott a job likely not noted in their contracts, Dickinson, in an interview published 37 years ago, noted there was only one rock "personality" he'd like to fence with–David Lee Roth (though it's also said Bruce wanted to get into the fencing strip with Nikki Sixx too). And if Bruce had it his way, the entire match would have been broadcast on MTV.

"Actually, there is only one rock personality I'd like to fence with and that's David Lee Roth. It's nothing personal; he's a great guy and an incredible performer. It's just that he has an interest in swords as well and we wouldn't mind a little friendly competition. We were supposed to have a match on MTV a few months back, but things didn't work out. We'll cross paths in the future, I'm sure."

This interview was originally published in March of 1985 which means it was written at least a month or so before it came out. During this time Maiden was out on the road in support of their fifth album, Powerslave. Regarding Roth's interest in swords, his association with the samurai variety has been very well documented through the decades. In fact, if you were lucky enough to see Van Halen back before they went Roth-less, you might have caught Dave doing one of his "Samurai Sword Solo" on stage while the rest of the band took a quick breather. If not, we’ve got some footage (perhaps from 1984 or so), of Dave using a Broadsword during a Van Halen show. It's not the greatest quality but you can clearly see Dave's no slouch with a Broadsword. We've also got some footage of Bruce from an appearance on MTV's Most Wanted featuring Dickinson showing off his fencing skills to the show's host Ray Cokes sometime in the early 1990s (the London-based show ran from 1992-1995). Perhaps if we watch the videos side-by-side we can get a sense of what might have been if MTV had gotten their shit together and made this happen.

Hell, I'm pretty sure we'd all watch Bruce and Dave do this now. Am I right?