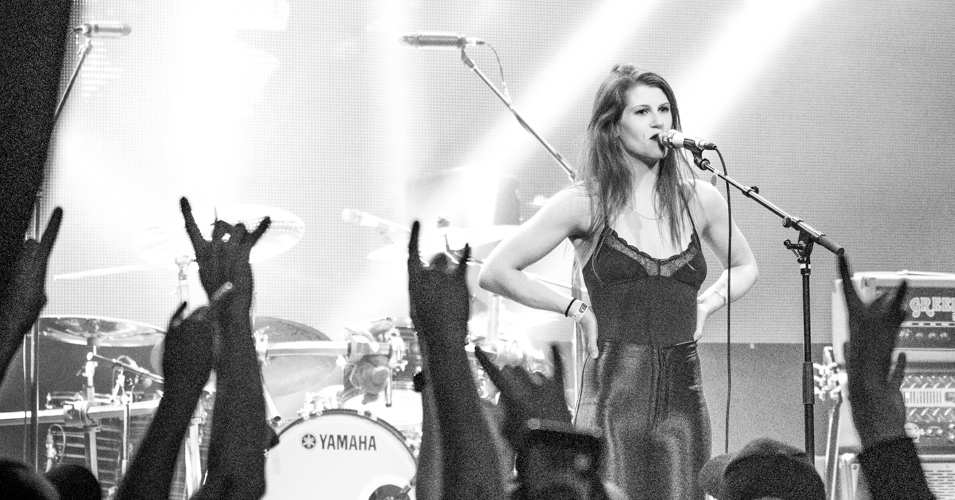 Kittie has two reunion shows lined up for this year at both the When We Were Young and Blue Ridge Rock festivals. The shows will be Kittie's first since their three-date anniversary series in 2017, and Kittie frontwoman Morgan Lander has made it known that she intends for the band to stick around a little longer this time… including some potential new music.

In an interview with MetalSucks, Lander said she has a "whole phone full" of riffs that could be used for new Kittie material, and that rehearsals for the upcoming festival appearances have opened the door to the possibility.

"I have a whole phone full of riffs that I'm, like, 'I think I could probably use these.' And preparing for these shows has obviously opened up that door a little more and sort of motivated me to do that stuff — be more creative and write. But I don't have a deadline."

"I feel like it's tough to focus on getting back up to speed with the tour and then also write at the same time. Everybody's navigating their jobs and family stuff and all that, so that's always tough. So I feel like it's kind of like one focus at a time. But we definitely won't stop playing shows. I think we'll be really choosy about doing some festivals and things like that. But I do have maybe kind of a skeleton timeline I'd like to have some of these ideas put forth by. I think new music in 2024 would be really cool."

Lander later added that she'd like to re-record Kittie's 2000 album Spit for an anniversary reissue. She cited Taylor Swift's recent re-recording campaign, which I guess means the new version of Spit wouldn't be a note-for-note redo of the original? That could be pretty cool.

"I know I've said this a few times, and maybe if I continue to put it out into the ether it'll actually happen, but the idea of maybe re-recording the first album for, like, the 25th anniversary — something like that — T-Swifting it up, it's kind of a really interesting idea. And I think with the musicianship now and how we all kind of sound and gell, I think it could be a really interesting exercise. That's something I thought about as well."