Sorry AC/DC, Turns Out Rock and Roll IS Noise Pollution to Ladybugs

Less Streaming, More Downloading Is Better For The Environment
Thank you for clarifying, Science.

Brandon Barton, assistant professor at the MSU Department of Biology, decided to test if AC/DC was correct or not in their assertion that "Rock and Roll Ain’t Noise Pollution." Turns out it is indeed noise pollution. According to Barton in an interview with the Starkville Daily News, listening to AC/DC caused Asian lady beetles to eat less aphids.

Barton and his crew played the beetles AC/DC, Lynyrd Skynyrd, Metallica, Guns N' Roses, a collection of outlaw country tunes by the likes of Willie Nelson and Waylon Jennings, British band Warble Fly, and then various noises like planes and jackhammers. Turns out the beetles just don't like harsh noise in general, while the aphids just didn't care.

“We immediately discovered that after about a day or a half day, 15 hours or so, the ones who had been exposed to the hard rock music, AC/DC, or even the city sounds, those loud kind of harsh sounds really reduced the number of aphids they consumed by a lot,” Barton said.

“In the one with the AC/DC blasting, the predators didn’t control the aphids, and I think we ended up with something like 180 aphids per plant on average,” Barton said. “That many aphids on one plant is enough to actually hurt the plant, so we saw a reduction in the plant biomass. The AC/DC indirectly reduced soybean production.” While he emphasized he had not proved this, he said he believed the difference was due to some attribute of the music making it more difficult for the ladybugs to find the aphids.

So there you have it. If you want to let aphids consume your neighbors' plants, blast some AC/DC.

Here are some related metal studies: 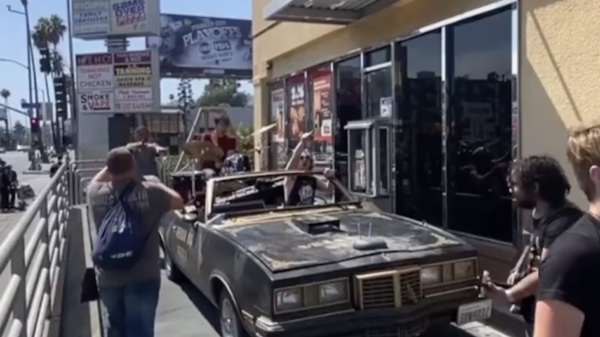 They had a blast, clearly.