DAVE LOMBARDO Names His Favorite SLAYER Deep Cuts, Shares Fond Memories of JEFF HANNEMAN
"We simply went different directions. I need to stand behind and feel inspired with what I do 100%"

As much as I love classic In Flames, the sound of their new album, Siren Charms and really their output for the last decade or so has not really been up my alley. I like to call it Gothenburg easy listening. Turns out, I'm not the only one who wasn't too hot about it.

Related: Read our review of Siren Charms here.
Video: Have a beer and play some video games with In Flames

Former guitarist Jesper Strömblad, who left the band in 2010 after recovering from alcohol addition recently opened up about his leaving and made it clear his problems with alcohol were only part of the reason he left the band:

Will I ever return to In Flames? No one never knows what the future brings, but the chances are slim as they embarked on a different musical journey. They have a solid lineup and I'm on a totally different path in life right now. I would never go into details why I quit, but there is always one official story and there is the other. Alcohol is a quite small part of it. That can also answer the next question, what do I think of their new stuff?

Listen to The Resistance and that explains a bit of it . We simply went different directions. I need to stand behind and feel inspired with what I do 100%, I owe it to the fans and obviosly the band. All respect to In Flames and their new approach, but for me the band was a guitar/riff based melo-death band. And it's not anymore, but still amazing musicianship and I don't think its wrong. But it's not the vision I had when we started out. But still, all respect to them and the huge success, highly deserved! So please, I wish, change the comment from "come back to In Flames", to "welcome Niklas Engelin [In Flames' new permanent guitarist]", who is one of the nicest talented guys, and the one who fill my shoes perfect, and brings back an amazing energy live and personally!

So there you have it.

I do not and will never compromise with my music. I'm on a new path together with the guys in The Resistance who made me want to play again and the good feeling of being a part of a band. Dedication, frienship, genuine passion for the music! Money, fame, Grammys, etc. doesn't matter a crap if you're not committed 100% to it. I also have a solo album coming up, an face-breaking EP and album with The Resistance and some other other exciting projects. So everyone is where they belong. I'm in a band I love. In Flame do their thing great… all good:) love you all

It's hard to disagree with him about the sound of In Flames. And, at least we get a new killer Swedish melodeath band out of the whole ordeal with The Resistance. I'm excited to hear Jesper's upcoming output.

It's not secret that '90s metalcore acts like Killswitch Engage, As I Lay Dying, Darkest Hour, and Trivium were influenced by the Swedish melodic... 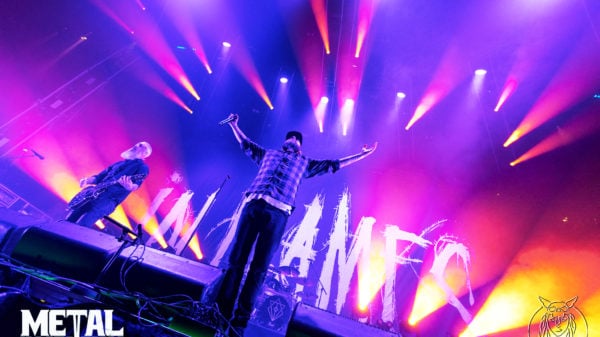 We've got the goods.