Family of CHILDREN OF BODOM's Alexi Laiho Accuse Ex-Wife of Delaying His Burial, Call Her Out for Sharing His Cause of Death 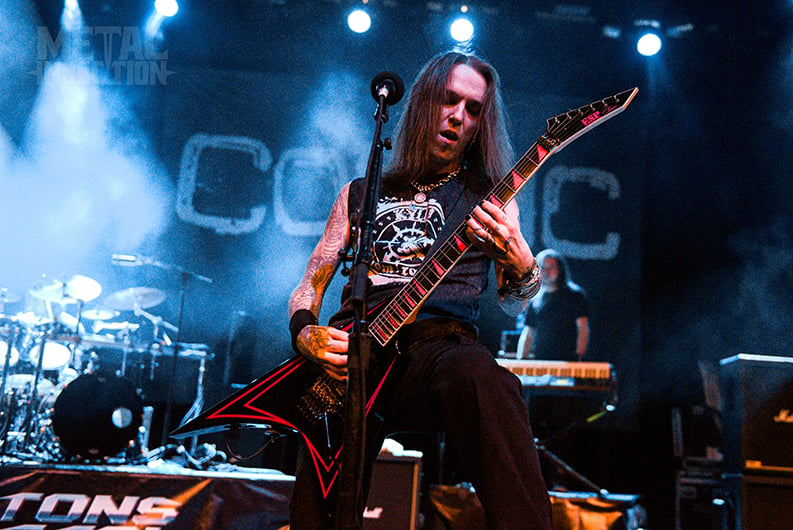 The grieving process over the passing of legendary Children of Bodom and Bodom After Midnight guitarist and vocalist Alexi Laiho has led to some turmoil between Alexi's family and his ex-wife, and former bandmate in Sinergy, Kimberly Goss.

On Friday, Goss shared the official cause of death for Alexi, based on a final forensic report she received. As fans grieved, Alexi's close family were upset with Goss for sharing the intimate details of Alexi's death. They felt Alexi was a very private person, and would have not wanted the details public, seeing as though he kept the fact that he was dying out of the public eye. They indicate that legally, Laiho and Goss never got a divorce, and because Goss is technically the widow, she is holding up the burial process for Alexi, because she wants to be present.

All of this was made public yesterday by Alexi's partner at the time of his passing, and the mother of his child, Kelli Wright-Laiho.

Wright-Laiho shared a public post on Facebook yesterday, sharing a comment Alexi's sister made to a mutual friend, writing "Alexi’s phenomenal big sister sets the record straight after the disgusting release of Alexi’s private medical records ??" and adding "So fucking proud to be apart of this family!!!"

The original message from Alexi's sister reads "I confirm that my brother broke up with Kimberly Goss decades ago and he had several valid reasons to do so (I will not go through the details here). Their so-called "close friendship" after breaking up exists only inside Kimberly´s mentally unstable head and everyone who knows Aleksi is well aware of that. This "friendship" was totally unilateral. My brother never, not even once, said ANYTHING positive to me about Kimberly. Someone might wonder why Aleksi was still married to her if he hated her so much. The reason is very simple, it was because Kimberly threatened him to take 50% of his money if he divorces her. Leaving marriage valid was not the best decision, but he was clever enough to make a will, excluding Kimberly of his inheritance. Everything will go to our parents."

"What is to be noticed is that Kimberly Goss currently prevents our family from burying Aleksi´s ashes and the situation has been this ever since the funeral took place on 28.1.2021. You see, this is how Kimberly Goss uses her legal rights as a widow, preventing griefing mother and father bury their own son. Her selfish and narcissistic explanation is that she wanted to take part in the funeral and still wants to be present when the ashes are buried. But our family does not want this monster anywhere near us. And last but not the least, publishing the details of Aleksi´s death is something Kimberly did against our family´s will and without our consent. I believe Aleksi would not wanted that either since he always wanted to keep his private life out of publicity. Our family´s opinion about publishing the details of the death was told to Kimberly very clearly and knowing this, she decided to do that."

This morning, Goss has limited commenting on all of her social media and shared a post in her Instagram story that reads "I don't know what to do. I'll be damned if I do and damned if I don't. I feel as though my hand is being forced by people who are spreading unthinkable lies about me. Lies that have resulted in me receiving gruesome threats of death/rape/ torture by fans who believe these falsehoods.

"Lies that I'm a "gold-digger" who Alexi "hated". This can be easily disproven through the beautiful text and video messages he sent me daily, right until the last day of his life. Messages so sweet, yet so heartbreaking at the same time. Heartbreaking because you can see how ill he was. I tried everything I could to help him. I often messaged people in Helsinki to check in on him because I was so worried.
I'm only human and I'm nearing my breaking point. I feel desperate to clear my name, but I know the only way to do so definitively would be to release his beautiful video messages to me. His closest friends in Helsinki have seen these, but that's apparently not enough to stop this slandering by a few delusional people. These messages are private, not meant for the world to see. I don't want to release them, but more importantly, I don't want to fear for my life every time I go outside. I take these threats very seriously. While most are empty, history has taught us that some fans are crazy enough to follow through. Dimebag was murdered by a fan who thought he was the reason Pantera broke up.

"So do I let the people taunting me, win? My limits are being tested. I don't want to stoop to their level, but how else do I get these threats to stop? The timeline of events clearly show that I'm not the one who started this public feud, but I have an obligation to defend myself against threats. It was HIS choice not to divorce me. Facts just seem to evade to certain people. I'm so broken."

[Thanks for the tip, Acky]