Did GWAR Fire VULVATRON Over The Internet? Members Kim Dylla and Brent Purgason Feud About It On Facebook

No Really, CHRIS BARNES Truly Hates The Modern Death Metal Scene
Dylla got fired... and had no idea she was fired.

If you caught GWAR on tour in the past year, you have undoubtedly seen their newest scumdog Vulvatron played by Kim Dylla tearing it up on stage. But it seems as though she just got the boot from the band for reasons that are still unclear. Ouch!

Vulvatron will continue to be a character though, just with another person in the costume. As the group has done several times in the past. According to the band, there was "no ill will" involved in the process of letting Dylla go.

"Kim did a great job, but we wanted to go a different direction with the Vulvatron character. You will absolutely see more of Vulvatron in the future, just not portrayed by Kim. There is no ill will, no acrimony, and no drama. We respect Kim's talent without question, it just isn't what we needed in the character."

Well, case closed. Except for the part where Dylla said she had absolutely no idea that she was fired from the group in the first place until she saw Gwar's statement on the Internet. Maybe that's why there was no ill will? You can't be pissed at someone if you don't even know! She said the following on Facebook.

“It’s really nice when you find out important things from people you consider to be your friends from posts on the internet and messages from strangers. There is something called basic respect not existing in that modus of communication. That being said, I’m currently looking for a new vocal gig with a serious metal band that likes to tour their asses off. Doesn’t matter what style but no core b.s., no symphonic metal. Must be chill dudes and down with beer drinking hellraisers. Must not be threatened by strong women, no deep-seated drama. Location unimportant.”

According to Metal Insider this lead to a thread war between Dylla and Brent Purgason who plays Pustulus Maximus, and this is where things get ugly.

Purgason: I did tell her in person. January 5th of this year. I’m trying to stay out of this thread but I don’t like being villainized when that’s not the truth.

Dylla: No one told me they were getting someone else to play the character I created which is why I am disappointed with the way this was handled. I was told my character was not going to be used for a while and things were going in a different direction with the storyline so take a year off but I’d be welcome back at gigs in the future if they were right for the character. Those are two wholly different things.

Purgason: Yeah but this thread isn’t about telling the world about a misunderstanding. This is up here to make us look like dicks. DC comics didn’t call need to call Adam West to tell them they were using Michael Keaton for a new movie. I told you it we never close the door to a chance that old characters could come back to reprise their role for a special event but we were going to continue the group without you. If they fired me they would have a new Pustulus before my amp got cold and that’s the way it is. You and I don’t own the characters we played.

Dylla: No but it is respectful to tell you personally before telling the internet and the fans if they were gonna do that. I don’t think you guys are dicks but I do absolutely think you acted like dicks in the way you handled this statement. Anyone would be upset about being treated this way and you can’t expect me not to be.

Purgason: We let you go in Jan. You were telling fans misinformation about the next fall tour under the pretense that you were still a band member. How is that respectful to us? We had to clarify that. We didn’t make a big stink about it when it happened because it wasn’t necessary. Many people have played many different characters and their entrances and exits weren’t publicized because the band is not about that. It’s been 5 months and none of us said anything about you being let go. You didn’t have to keep this facade up the whole time. You could have let the fb world know then but now it looks to me like you want to drag this out. Sorry you feel that way but no one here threw you under the bus.

GWAR created Vulvatron so yeah, that is my point.

Dylla: I designed that costume with Matt, came up with the name, invented everything about the character and the voice because you told me to run with it. It belongs to Gwar but I think you’d at least respect me enough to not put someone else out there in my baby without telling me to my face. 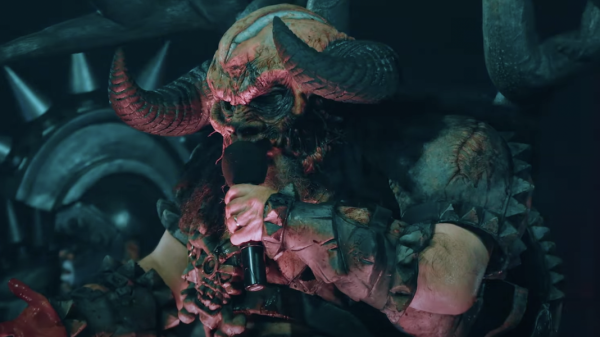