TORCHE Is Breaking Up After Current Tour
…and it's all [adult swim]'s fault.

We were so close! Last year, we learned that Adult Swim was not interested in launching a final series of episodes for Metalocalypse. A social media campaign was launched and it seemed to be pretty successful. Brendon Small even teased working on new Dethklok music and Adult Swim even got in on the teasing by launching a live webcam of a fax machine pushing Dethklok requests directly into the trash. Ha ha, very funny.

But it turns out they were not joking. Our friends at Metal Insider conducted a new interview with Brendon and he shed some light on what's happening, or should we say not happening:

“I think I’m basically all but finished making Dethklok records, only because the network has been less than easygoing about lending out the name.”

“The network was kind of dangling this final thing after Doomstar in front of me and then they said they didn’t want to do any more episodes. I asked why not and they said it was for financial reasons. Then the whole Metalocalypse Now fan campaign started and they got in touch with me and said ‘hey what can we do to save this show?’ They were saying that they didn’t have enough money, but I thought if we caused enough noise, some financial backers would show up. They actually did, and some people that were willing to offer just shy of two million dollars stepped forward and said ‘we would love to finance the show and do this final mini-series,’ and the network said ‘no, we don’t want to do anymore Metalocalypse at all,’ and that was the end of it.”

“It turns out Adult Swim doesn’t want anyone to have Metalocalypse, not even themselves. They just want old re-runs.  They paid for it, so they can take their ball and go home with it, and that’s how show business works, for better or for worse. They said just a flat out no, and they get to do that. And if I had paid for the series, then I would get to make the decisions, but I didn’t pay for it.”

So that's a bummer. It seems like Dethklok is done.

Meanwhile, Brendon is focusing his efforts on a new solo album under his Galaktikon moniker. More info here.

Confirmed: A Metalocalypse Movie Is Coming To Adult Swim 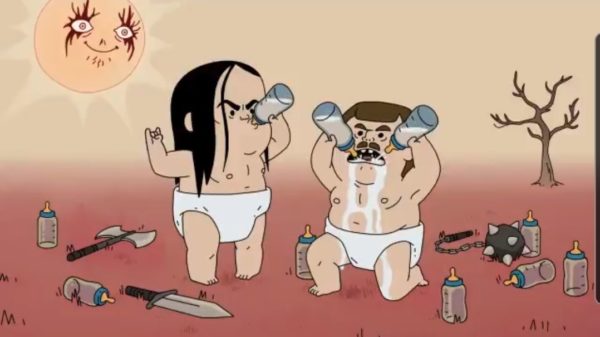 Yes, this is a joke.