THE ACCÜSED A.D. Brings The Slow-Chruning, Snotty Punk On "A Terrible Tail" 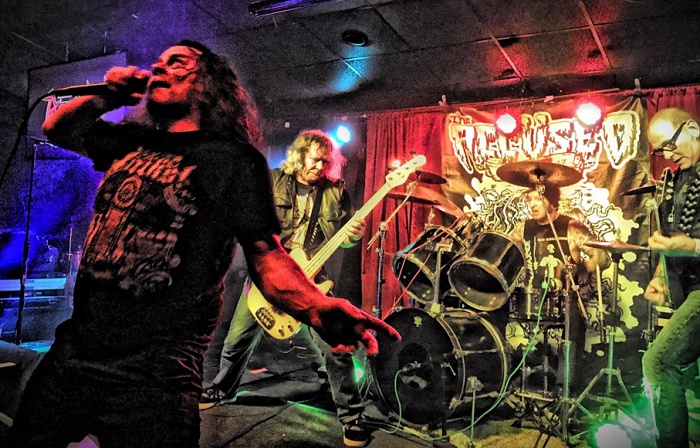 The Accüsed A.D., the band formerly known as Toe Tag, recently signed to Blackhouse Records. The band will release their new album The Ghoul in the Mirror on May 10, which is also their first under the The Accüsed A.D. moniker. We're proudly premiering their new song "A Terrible Tail" today, which vocalist Blaine Cook says is lyrically a tribute to the pre-Jerky Boys project Bar Bum Bastards. Musically, it's a snotty-ass slow-churning punk riff machine that demands to be blasted, lest you piss off the likes of Martha Splatterhead.

This song is a tribute to the bum bar bastards who did a series of prank calls from 1975-1978. Also referred to as the tube bar tapes or the red tapes. Definitely not acceptable by todays standards.

We got a hold of a copy of the cassette some time around the 1986-1987 time frame.the tape was widely circulated in the underground scene Being children of the 70's we too occasionally partook in the forgotten art of the prank phone call. Plus we like to laugh and the material is really funny.

The Ghoul in the Mirror was produced by Jack Endino (Nirvana) and mastered by Scott Hull (Pig Destroyer). The Accüsed A.D. will play St Vitus on 5/23, and will make an appearance at Maryland Deathfest.

In this article: the accused, The Accüsed A.D.

Well here's a portion of the announcement, and it RULES!

Advertisement. Scroll to continue reading. Time to put on your high tops and whip out those boogie boards, the party animals in MUNICIPAL WASTE...

For a band that plays at the speed of death, these dudes sure have been hitting the road pretty fast and furiously lately (at...