DAVE MUSTAINE Continues To Be An Unpleasant Person

DAVE MUSTAINE Used To Sell Weed To Dino From FEAR FACTORY's Sister
'You know what?! I'm a freakin' millionaire, and for me to have to go in there and ask somebody to get an X-ray?'

The field of smug blowhards in rock music is crowded indeed, but Megadeth frontman Dave Mustaine stands head and shoulders above the rest. Only Ted Nugent, with his virulent bigotry and total disregard for basic human decency, can rival Mustaine in terms of repugnance – and that's mainly because Nugent is routinely given a bully pulpit to spew his garbage from by major news networks like CNN and Fox News. Mustaine, for his part, does his best to keep up. It seems that he spends all his time either writing and performing disappointing music or behaving like a pompous dolt during interviews.

The latest media outlet to jam a mic in Mustaine's face while he babbles semi-coherently is a podcast called Hangar 19. The masochists over at Blabbermouth.net transcribed the best (worst) parts of the interview, and Mustaine provides some real pearls of wisdom for listeners. For example, take a look at this passage:

"Anybody that watches the news nowadays… I watch the news, I read voraciously, I am a New York Times best-selling author, so obviously I know a little bit about writing and reading, and when you think about what's going on in our world as we know it, especially our nation here, it has totally changed, and it's not the same country that it used to be. It's really a drag, and the gutless people in Congress won't do anything about it. You see what's going on with our borders."

Notice how Dave makes sure to remind listeners that he's technically a New York Times best selling author. I say technically because Mustaine employed a ghost writer named Joe Layden to help him write his own autobiography – presumably because he actually does only know a little bit about writing. Aside from sheer arrogance, there's no particular reason for Mustaine to invoke the two whole weeks the book he sort of wrote spent on the New York Times Best Seller list. It sounds like he's trying to qualify himself as an authority on current events, but he's really only making the kind of nebulous complaints that are the bread and butter of all conservative media figures. "The country's changed. The government stinks, maaaaan. Our borders. Blah blah blah."

Predictably, the conversation soon moved to mean 'ol Obama (but not before Dave reminds us he's an international rock star for no reason):

"I live in San Diego, and I can get along peacefully with any nationality and anything like that, because I'm an international rock star, but when it comes down to destroying a country for pandering to lobbyists and stuff like that?! Hum-um. The Supreme Court rules 9-0 against the President overusing his powers? Hello?! In 2008, I said that [President Obama] was gonna be the most divisive president ever, and I was right. He's got the lowest approval ratings in the history of America.

It's unclear what listeners are supposed to take away from that incoherent mess. Is Dave positioning himself as some sort of political Nostradamus? That would actually be fitting because Nostradamus was wrong about everything he said, too. President Obama is certainly a divisive figure thanks to the general political climate in the United States, but the most divisive president ever? It's not a stretch to say Abe Lincoln was at least slightly more divisive than Obama.

It's not just politics that gets Dave's goat, though. He also uses the interview to rail against the crappy health care system the politicians he votes for have stuck the American people with:

"I had the surgery on my neck and I was going to get a doctor's appointment yesterday to get a CT scan, 'cause I've got a pinched nerve, and they said, 'Well, we've gotta apply to see if you can get approval for a CT scan.' And I said, 'You know what?! I'm a freakin' millionaire, and for me to have to go in there and ask somebody to get an X-ray? Shame on you, guys. 'Cause if you're doing this to me, what are you doing to the middle-class, what are you doing to the lower-class people?' I was a poor kid, but that stuff pisses me off. And that's gonna come out in the [next Megadeth] record, trust me!"

Can you believe a freaking millionaire like Dave Mustaine has to suffer the indignity of checking with his insurance provider to see if a CT scan is covered under his policy?! That's utterly ridiculous! He does have a point, though; the middle class and poor get screwed when it comes to health care. If he's so concerned about the plight of the working class, you have to wonder why he supports the politicians who are responsible for creating and reinforcing the messed up system he's supposedly upset about.

If you're still reading at this point, I congratulate you on your fortitude. Take a moment to cleanse your pallet with this video for the Megadeth classic "Hangar 18." Dave may be a bitter, dried-up turd now, but at least his music used to be somewhat tolerable. 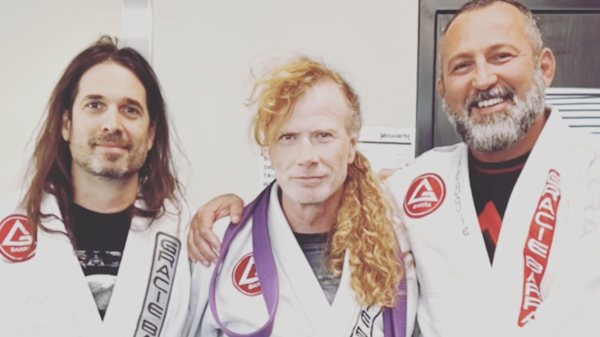 DAVE MUSTAINE Is Now A Certified Brown Belt in Jiu-Jitsu

Should the riffs not kick your ass, Dave will instead.