BEHEMOTH Found Not Guilty For The Second Time Over Use Of The Polish National Emblem
Including screenshots of Fuentes being less than reputable.

Pierce The Veil drummer Mike Fuentes has been accused of carrying on a sexual relationship with a woman who was at the time 16. According to the detailed note written by an anonymous woman and posted on Twitter by user @punkdoll (who is not the anonymous woman), she met Fuentes on MySpace when she was 15 years old. Upon turning 16, she met Fuentes at a Pierce The Veil show in Anaheim, CA, and made out with him.

The woman and Fuentes began regularly texting each other, and according to the account, a friend of the woman reached out to Fuentes to let her know she was only 16 years old. Fuentes asked the woman if it were true, she confirmed she was indeed 16 years old, and Fuentes responded "Haha I don't care babe. I just thought it was funny she'd try to message me about it.” The woman then claims they had sex for the first time at the Pomona stop of Warped Tour 2008, and carried on having sex until 2010. The woman also provides a censored screenshot of Fuentes pleasuring himself to her on video chat.

Another woman named Shannon Bray claims Fuentes asked her for nude photographs of herself when she was 15 years old.

For anyone who doesn't believe the accusations coming out today: MIKE FUENTES asked me for nudes when I was FIFTEEN

SO glad these grimy band dudes are finally getting what they deserve. mike fuentes used to be a total creep to me when i was 14/15, would hold my hand, ask me to date him, and would ask me to send "pics" etc.

Bray also provides an account of her meeting Fuentes in 2008 to Loudwire.

"I went to Warped Tour and met Mike at their signing. I said, 'Oh my god, I’m a big fan.’ He’s like, 'Cool, are you doing anything today? Do you want to hang out?' I remember ditching my friends, holding his hand and walking around Warped Tour. I was 14."

"When we parted ways, and he said, 'Let me get your phone number.' So we texted for a while, and he’d always say things like, 'I was too nervous to kiss you, but next time I will.' He never kissed me or anything; the furthest he went was holding my hand. We hung out until I was 15, still never doing anything other than holding hands. I remember him texting me, 'I have a question for you. Will you date me? You should send me pics ;).’ I specifically remember not knowing what he meant, so I sent him a picture of me smiling. And then he said, ‘No, not that kind of pic,’ and then I didn’t respond. Our relationship fizzled out, we didn’t talk after that."

Loudwire further states they've reached out to Pierce The Veil's PR rep, who said "as of right now, there isn't a statement from the band or management."

In this article: Pierce The Veil 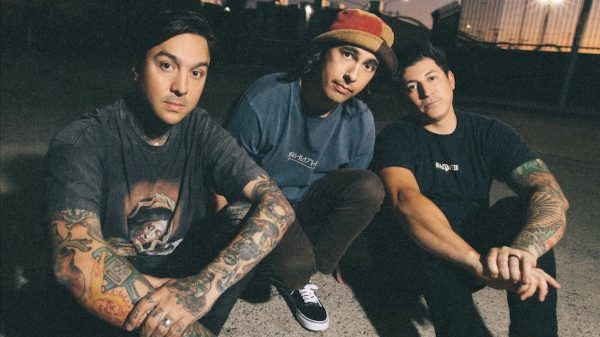 No word on when or if he'll return.

Against Me!, Sleeping With Sirens, and The Pretty Reckless too!