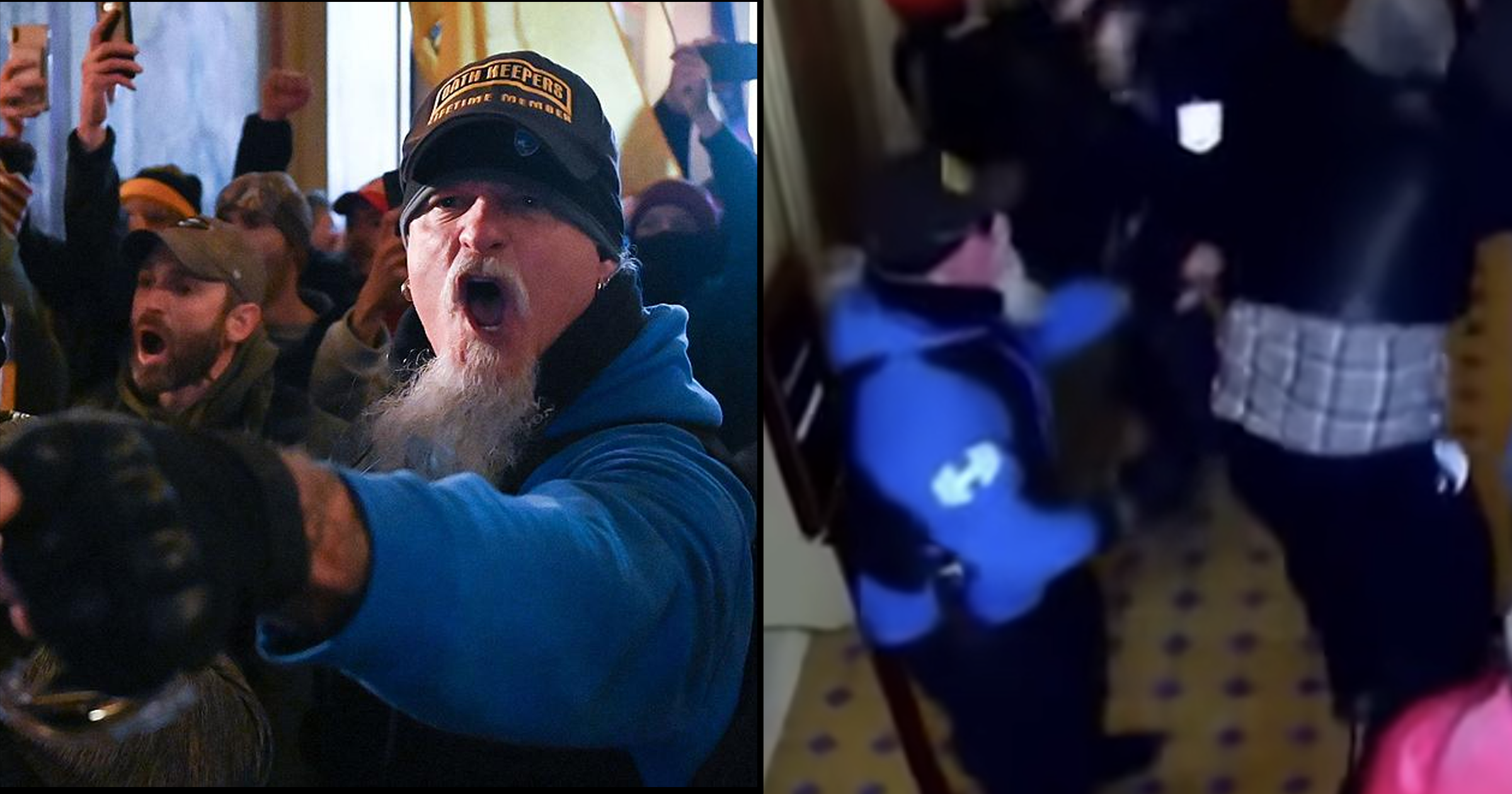 As expected, Iced Earth's Jon Schaffer will be pleading guilty to charges of his participation at the riot at the U.S. Capitol on January 6th.

Politico reports the news was revealed at an "unannounced proceeding before U.S. District Court Judge Amit Mehta on Friday morning."

A report from the Washington Post notes that in Schaffer's plea agreement he admitted to being a "founding" lifetime member of the Oath Keepers, but they note that Schaffer is "the first defendant to potentially flip in the sprawling domestic terrorism investigation that has led to charges against more than 400 people."

Schaffer is potentially facing a maximum sentence of 30 years based on the charges he agreed to. According to the Washington Post, the two charges Schaffer is agreeing to plead guilty to:

Friday’s filing shows Schaffer has agreed to plead guilty to only two charges, but both are felony offenses carrying heavy penalties that federal prosecutors are relying on heavily in the wider probe.

One, obstruction of an official proceeding of Congress, is punishable by up to 20 years in prison; the other, trespassing on restricted grounds of the Capitol while armed with a deadly or dangerous weapon, carries up to a 10 year prison term.

The government report lists the dangerous weapon as "a cannister of bear repellent capsaicin pepper spray, commonly referred to as 'bear spray.'"

Update: CNN reports that prosecutors and Schaffer's defense agreed to recommend between 3.5 and 4.5 years of sentencing in prison, based on his cooperation, but the decision is ultimately up to federal Judge Amit Mehta.

Schaffer will be allowed to be released during sentencing on the following conditions:

The FBI previously charged Schaffer with six different charges, one of which accuses him of spraying Capitol police with bear spray, a more potent form of pepper spray. Schaffer is not guaranteed bail, and must prove that he is not a threat to himself or the public to be granted so. Schaffer is dealing with the following charges:

Security footage has surfaced showing Iced Earth guitarist Jon Schaffer storming the Capitol building and getting into a shoving match with Capitol police trying to stop the insurrection.

Leaked court documents showed that talks between Schaffer and prosecutors on a deal were in the "advanced" stages, according to a report from BuzzFeed News. The public filing was made in error, as prosecutors intended to file it under seal to avoid this sorta thing. Of the more than 350 people charged to date, some others arrested have been offered similar plea offers. However, no specifics of the plea deals have been revealed. Buzzfeed News noted the filing wrote that the negotiations with Schaffer were “the first and most advanced” involving “any of the over 300 Capitol Riot defendants.”

One interesting aspect of the document suggests that Schaffer might have to testify in front of a grand jury.

Additional time may also be necessary in the event plea conditions require completion of certain requirements before entering into a formal agreement before the court, such as the defendant testifying before the grand jury.

A few weeks ago, a federal court upheld a pre-trial detention order for Schaffer to remain in jail and offered new insight on what the government will be investigating. The order contains the first detailed account of Schaffer's actions from the government's point of view. In the order, the Government makes the claim that Schaffer was among the first people to breach the Capitol building during the January 6th riots and questions his affiliations to the "Oath Keepers."

"In response to the Government's exhibit of Mr. Schaffer speaking at a rally in November 2020, Mr. Schaffer argues that he was simply explaining his political views. When asked about violence in the video interview, Mr. Schaffer responded that he didn't want violence, but that he was prepared to meet any violence with self defense. In response to the video that shows him entering the Capitol, Mr. Schaffer argues he was only in the building for 60 seconds and only unholstered the bear spray in question because he thought someone was trying to take it. Mr. Schaffer said he is not a flight risk because he voluntarily contacted his lawyer and surrendered himself. He is a high profile musician so would have difficulty fleeing. He has a stable girlfriend, stable residence, and a daughter. He is 52 years old with no criminal history or substance abuse problems. Mr. Schaffer argues the weight of the evidence is weak, as the Government did not provide evidence that he knowingly entered the Capitol building unlawfully. There was no evidence of violence presented and Mr. Schaffer says he is not affiliated with the 'Oath Keepers.'

"Mr. Schaffer is charged with carrying a dangerous weapon (bear spray) onto restricted, Capitol grounds. His actions on January 6, 2021, during the certification of the electoral college vote, were shocking to the rule of law and the democratic process. As Chief Judge Howell noted in United States v. Barnett, the title of the offense does not 'properly capture the scope of what [the defendant] is accused of doing here.' In this case, there appears to be premeditation and a weapon present. Mr. Schaffer appeared in the video to be one of the first people to breach the Capitol. There is some evidence, and evidence still being developed, that defendant is affiliated with groups that present ongoing threats of danger to the community, e.g., the 'Oath Keepers.'

"The government presented a number of exhibits at the detention hearing that show Mr. Schaffer was in possession of bear spray. There is video of him clearly entering the Capitol and three police officers that appear to fall back in self defense. Thus, it doesn't seem likely or reasonable Mr. Schaffer was under the impression he was 'invited in' by Capitol law enforcement.

"Mr. Schaffer has no criminal history and no documented history of substance abuse. He is employed and has a stable residence. It is true he is within his rights to demonstrate and share his political views through lawful means. This case concerns unlawful means of demonstration. Mr. Schaffer's status as a firearms owner does not have any bearing, negative or positive, on this decision.

"While Mr. Schaffer is most likely not a serious flight risk due to his status as a well-known musician, there remains the concern of danger to the community. Mr. Schaffer's views on the government and current administration are long held. His statements, including the November 2020 interview, show that this was not an isolated event. He has stated there would be 'bloodshed' if the current administration came to power. This transfer of power has taken place, so it cannot be assured Mr. Schaffer will not engage in further violence to support his political ideology if released. The Government alleges Mr. Schaffer is a lifetime member of the 'Oath Keepers,' which is an organization that has questioned the legitimacy of the government and threatened political violence. Last, although Mr. Schaffer claimed he would only respond to violence in self defense, there was no violence directed against him on January 6, 2021, yet he engaged in violent and destructive behavior when he entered the Capitol armed with a weapon."