These Are The 10 Best KISS Deep Cuts 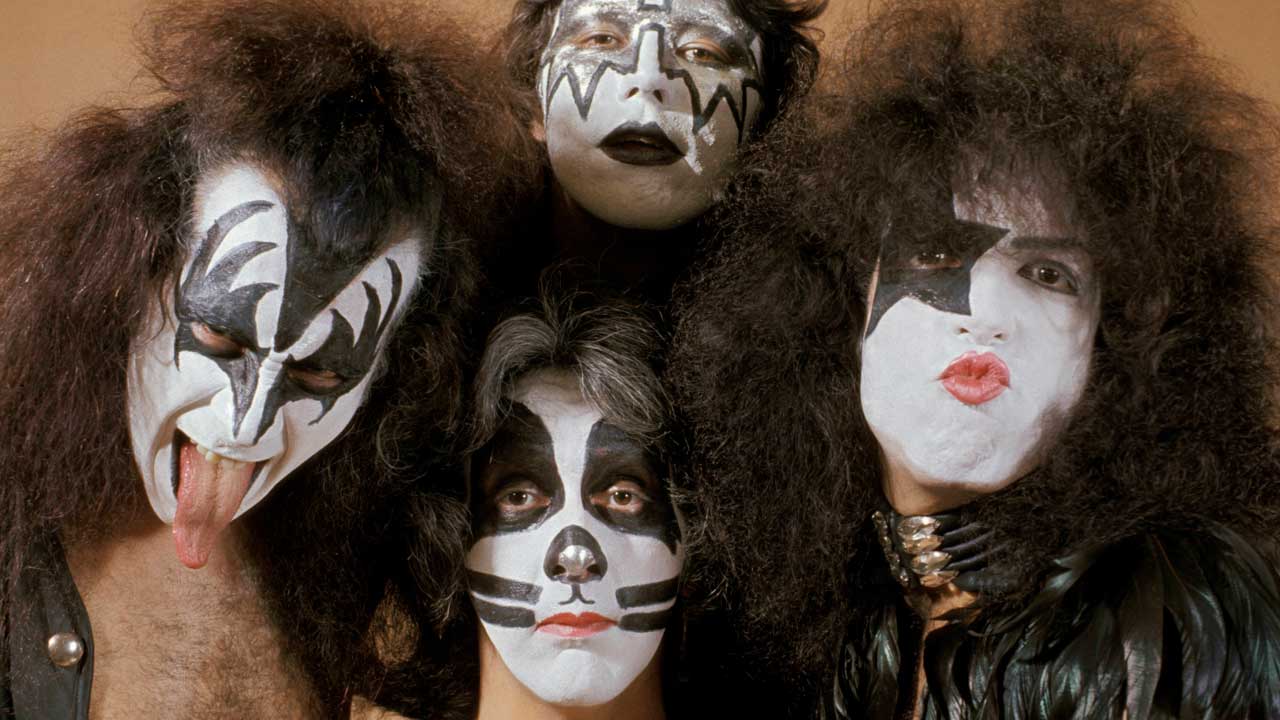 Love or loathe ‘em, Kiss have achieved the career longevity that almost every other musical act in existence would kill for. There would be very few people in the Western world who wouldn’t have some semblance of knowledge of the four makeup clad, superhero-cum-rockstars. Their success is not only from their initial huge popularity in the mid to late 70s, thanks to their groundbreaking live shows and massive anthems, but the enormously lucrative ‘reunion’ tour in 1996 and beyond.

One of the strongest points of Kiss – and sometimes their weakest – is band’s various song writers and singers. You can count on one hand the amount of groups that have a bonafide lead vocalist in every member. The problem doing an article like this on them is that Kiss have composed so much damn stuff – we could have easily done a list on each decade of their career. Instead we’ve focused on having tracks from across their whole output.

As the End of the Road tour sees Kiss wind their way around the planet one last time, now is as good as ever to dig though their back catalogue to find 10 of their finest deep cuts…

Kicking off our list is a Kiss track with the Catman, Peter Criss on lead vocals. Taken from Rock And Roll Over, when they were at the absolute peak of their powers, “Baby Driver” is one of only two pieces from that LP never to be performed live. The opening tune on Side B, it’s a great straight ahead rock and roll song with plenty of groove to boot. Plus the founding drummer really does have a underrated voice – arguably the best of the group. While most think of the ballads “Beth” and “Hard Luck Woman” when envisioning Peter Criss-led Kiss numbers, “Baby Driver” shows that he can easily handle the harder rocking material with ease.

Even though the world wasn’t really desperate for new Kiss music in 2009, Sonic Boom, the band’s 19th studio release, was an album of straight-ahead rockers akin to their mid 70s output. Paul Stanley comes up clutch, with his tracks being the strongest on the record – “Modern Day Delilah” is tremendous, as to is the never-played-live “Danger Us”. Eye-rolling title and lyrics aside, the riff driven rocker is everything you’d want from Kiss; it boasts a great chorus, and the bridge and guitar solo section really takes “Danger Us” to the next level. If this was on Love Gun it would be considered a Kiss classic. Interestingly, due to the Sonic Boom’s initial exclusive distribution through Walmart, Sonic Boom isn’t available on any streaming services.

“Escape From The Island”

You just knew that we were going to visit the oft-maligned Music From “The Elder”. Often lumped into those hackneyed ‘worst albums of all time’ lists, there is some good stuff on here, like the excellent hard rock opener “The Oath” and the prog-ballad “Under The Rose”. However a track that never gets mentioned is uptempo piece “Escape From The Island”. The instrumental, in on itself a rarity in the New Yorker’s back catalogue, was one of the last Kiss songs co-penned by Ace Frehley, and coincidently one of the first by debuting drummer Eric Carr. With lots of off-time riffs and some great drumming, it’s far more complex than a lot of Kiss’ other material. More Kiss fans need to know “Escape From The Island”, and the LP it inhabits.

1992’s Revenge was seen by many fans as a great return to form from Kiss’ unfocused and hit-or-miss 80s period. While it wasn’t a major commercial success, it packed some of the biggest, toughest and best songs that the band had written in years. The hard rockin’ “Heart Of Chrome” is a classic Kiss tune – lots of great playing across the board and a big chorus; rarely has Paul Stanley sounded better on this track. Co-written by producer Bob Ezrin and former member Vinnie Vincent, it’s only been performed live once back in ’95 – although Bruce Kulick, who lays down some great lead guitar work on “Heart Of Chrome”, has pulled it out regularly in his post-Kiss career.

Never ones to shy away from embracing the musical current trends, 1998’s Carnival of Souls saw Kiss embracing the dark and less polished grunge style that was all the rage in the early to mid 90s. Working with Toby Wright, most well known for his work with Alice In Chains, the record was a mixed bag – Paul Stanley doesn’t sound great, or convincing, on this style of material, so it’s the Gene Simmons’-led work that sound the best. “In My Head” is one of the standouts, with a some great sections, especially the creeping verses – although it really does sound like a Jerry Cantrell-ghostwrite. The LP was finished in early 96, how due to the Ace Frehley/Peter Criss reunion tour it didn’t drop until the end 97, and Carnival of Souls quickly sunk like a stone, with no tracks having ever been played from it live.

As Kiss’ Alive II only had three sides worth of live recordings, the fourth was padded out with new five new tracks, from the amazing (Ace Frehley’s “Rocket Ride”)to the dated (“Rockin In The USA”). A tune no-one talks about is the Gene Simmons’ penned “Larger Than Life”. With The Demon handling vocals, as well as bass and rhythm guitar duties, the number is a classic straight forward, double-entendre riff-rocker than Kiss have built their careers on. “Larger Than Life” has been played just four times – twice acoustically and two more times in 2019 on the Kiss Kruise, and certainly deserves more limelight.

One of the four new songs on the 1982 compilation Killers, “Partners In Crime” is a great, forgotten mid paced tune that came to life during Kiss’ lowest point commercially. The Paul Stanley led number has had an interesting release history, and there are actually two versions of “Partners In Crime” out in circulation. As the Killers collection was intended solely for the European market, the band re-recorded it for the ’83's Creatures Of The Night – but it didn’t make the cut. Instead it sat in the archives for six years before making it’s way onto the extremely hard to find First Kiss, Last Licks compilation.

A riff filled track from the Asylum, “Radar For Love” has never been played live by Kiss, and never gets talked about. The song, written by Paul Stanley and hit-machine Desmond Child, has some great guitar work and Eric Carr’s drumming sounds as inspired than ever. It certainly rocks a lot harder than a big chunk of band’s poppier-material from this era; Stanley’s love of Led Zeppelin is pretty easy to see and hear. Considering the cheesy “Who Wants to Be Lonely” and “Uh! All Night” got film clips made for them and were played live, it’s ridiculous that their far superior album-mate “Radar For Love” has been forgotten completely.

Aside from the inescapable mega-hit “I Was Made For Lovin’ You”, and the arguably better “Sure Know Something”, the rest of Kiss’ 1979 record Dynasty never really gets talked about. One of the best songs on the release is it’s closing number, Ace Frehley’s “Save Your Love”. Frehley’s vocals sound as strong and confident as they ever had, and the track it’s self is an across the board winner – great verses, chorus and of course a killer guitar solo section. Aside from the drums – which were handled by session man Anton Fig (not Peter Criss) – all guitars and bass were played by The Spaceman, as well as his two other tracks on Dynasty.

By the time the 1980’s came, Kiss dove into the decade’s new sounds with both 7 inch-heel clad feet. There is no bones about it – there’s definitely some terrible material from this period of the group, but the unreleased “Sword And Stone” was definitely stronger than a lot of it. A demo from the Crazy Nights session, it’s definitely a song of times – it’s got that pumped up, action-movie anthem feel. Lots of keyboards, shredding guitars and a really great, instantly catchy chorus. Despite the track never being included on a Kiss album, “Sword And Stone” wound up being recorded by two acts, two years apart – firstly ex-Loverboy lead guitarist Paul Dean in ’88, then the following year by German hard rock band Bonfire for the Wes Craven film Shocker.

How did we go? Do you think Kiss’ entire non-makeup years deserve to be swept under a rug and forgotten? Is their 90s and beyond output underrated? We know the true Kiss Army members will worship heaps of classic Kiss deep cuts no-one talks about – so what are they? Let us know in the comments below! 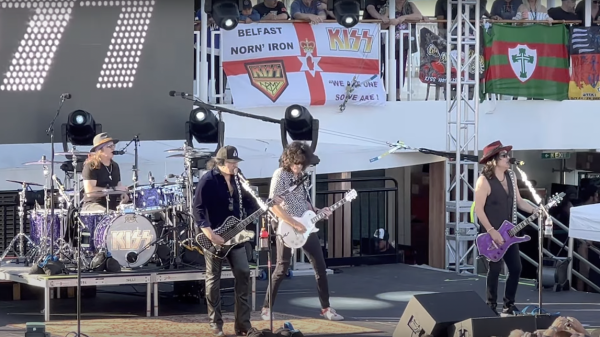