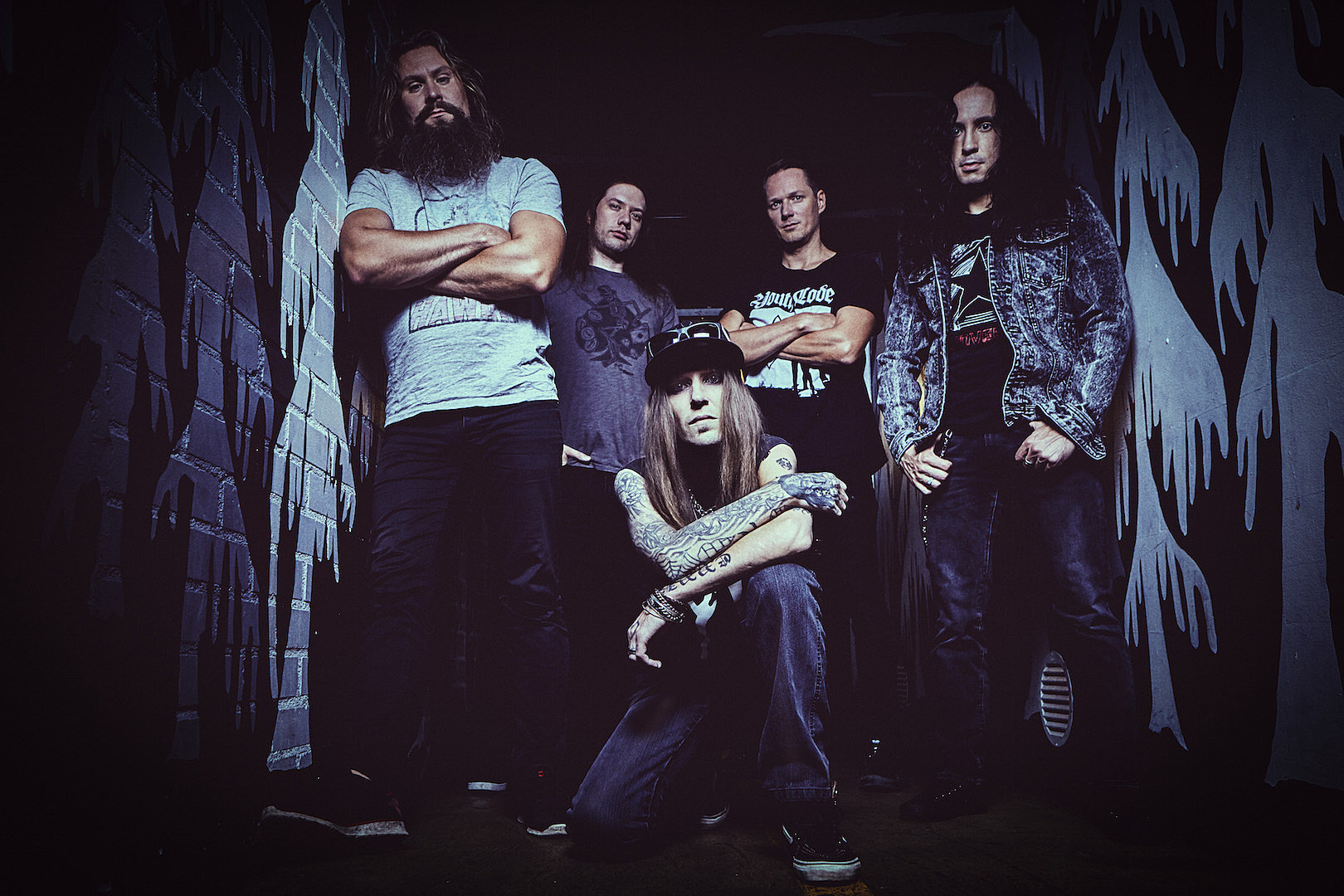 One of Finland’s greatest metal exports, Espoo’s Children of Bodom created a musical legacy that was built upon an instantly recognisable sound and a relentless touring ethic. Formed under the name Inearthed in 1993 by the then-teenaged Alexi Laiho (lead vocals and lead guitar) and drummer Jaska Raatikainen, Children of Bodom released ten full lengths over the course of an almost three decade long career.

Their original sound was an amalgamation of the various European metal subgenres – melodic death, power, neoclassic and a touch of black – before growing to include other influences including groove metal and even hints of industrial and punk music. Keyboards were always a prominent aspect of their style, as too was Laiho’s incredible lead guitar work and his barking vocals, with their vastly underrated rhythm section serving as the group’s backbone.

After a relatively amicable parting of ways at the end of 2019, the curtain fell on Children of Bodom's career. Though Laiho had begun to carry on recording and performing under the Bodom After Midnight banner, those plans were sadly scuppered by his untimely passing in January of 2021. What he left behind was a immense and respected body of work that was revered by heavy music fans across all corners of the Earth.

Though a lot Children of Bodom’s tracks are rightly considered some of the finest metal anthems of the 90s and 00s, there are plenty of forgotten tunes tucked away in their back catalogue. So what are they? Read on…

Kicking off our list is a track from Children of Bodom’s eighth record Halo of Blood. Seen by many as a return to form, it has a tonne of great material on it. One song that never gets talked about though is the penultimate number “All Twisted”. It’s classic Bodom; with great guitar, vocal and keyboard hooks, raging double kicks and an excellent outro passage. A lot of old-school Children of Bodom fans had written them off by the end of their career – deep cuts like “All Twisted” showed there was still plenty of Finnish gold to be found.

Taken from 1999’s Hatebreeder, arguably Children of Bodom’s finest hour, “Black Widow” is a prime example of great song that has been overshadowed by some of it’s higher profile album-mates. A perfect illustration of the Finn’s early style, the heavily neo-classically influenced rager packs some dazzling melodies and top-tier riffage. The section that crops-up after the one minute mark is amazing, as to is the closing solo passage. “Black Widow” is an excellent track more Bodom fans need to know.

The only release where Alexi Laiho handles all guitar work, I Worship Chaos is not Children of Bodom’s finest effort, but there is some good stuff on display, especially the latter-album highpoint “Hold Your Tongue”. Anchored with some excellent drumming from founding member Jaska Raatikainen and a super-melodic chorus, it was never played live, which is a shame as "Hold Your Tongue" is one of the most memorable tracks on a somewhat average Bodom LP.

A tune that originally appeared on the Trashed, Lost and Strungout EP back in 2004, Children of Bodom decided to re-do the highly underrated “Knuckleduster” on what would be their final full length, Hexed. And it’s no surprise that the band weren’t content to let the fantastic, uptempo song fade away in the archives.  After ten years, Bodom wisely kept the composition basically the same, with the only major difference being the tuning sitting half a step lower, while Hexed’s beefier production gives it a bit more oomph. “Knuckleduster” is the final number off their last effort, and serves as a nice finale for the act’s recorded career.

An deep cut from Children of Bodom’s excellent debut Something Wild, “The Nail” is raw, fast and complex – yet clearly shows off their unique, ear-grabbing sound. A melding of extreme, power and neoclassical metal, the amount of unbridled talent that Bodom had at such a young age – especially talismanic frontman/guitarist Laiho and keyboard player Janne Wirman – is unquestionable. Something Wild is perhaps a little under visited by fans, which is a shame as it shows the group when they were brimming with youthful hunger and ambition – something “The Nail” provides in droves.

Potentially the least well known track from Children of Bodom’s commercial high point, “Next In Line” is an instantly headbang-able number. The only tune from 2005’s Are You Dead Yet? not to be performed live, “Next In Line” moves between a cracking half time groove, a faster pre-chorus and some an excellent solo sections from Wirman and Laiho. While some ardent fans claimed that Children of Bodom dumbed down their sound around this time to gain a foothold in the North American market, one cannot deny that their song craft was still absolutely topnotch, with even the lesser known “Next In Line” being absolutely killer.

The fast and furious closer of Children of Bodom’s sixth album, 2008’s Blooddrunk, “Roadkill Morning” is as straight to the point that the band gets. Fleet fingered riffs, rampaging drums and spat out vocals; it almost has a crossover-thrash vibe to it, coupled with a classic melodic Bodom chorus. On a somewhat somber note, the lyrics deal with the unpleasant physical affects of a massive hangover – which with Laiho’s passing, perhaps now has a bit more of ‘cry for help’ tone to it than originally intended.

“Taste Of My Scythe”

A fantastic song that somehow was never played live, “Taste Of My Scythe” is an underrated cut from Children of Bodom’s superb record Follow The Reaper. The guitar and keyboard work is dynamite, with so many great melodies, harmonies and lead runs. It perfectly encapsulates the style and sound that made Children of Bodom the legendary band they are revered as today – yet is one of the least streamed tracks from their third LP. It’s a tune that has probably been pushed into the background simply due to the better known numbers from Follow The Reaper.

Contrary to what many think about Hate Crew Deathroll, Bodom’s 2003 international breakthrough, there is still plenty of complex guitar parts and classic 80s horror movie keyboards all over the shop. The excellently titled “Triple Corpse Hammerblow” is a prime example of this, with the speedy track showing that Children of Bodom had lost none of their unique sound and style. It really has everything you could want from a Bodom song – dualing guitars and keyboards, raging drums, catchy hooks and a gang-vocal-led chorus. An extremely underrated classic.

Children of Bodom’s deep cut cover of a deep cut King Diamond track, the Finn’s version of “Waiting” is worth checking out almost solely for Laiho’s (successful) attempt at the King’s legendary high vocals. A bonus piece snuck in at the end of 2009’s cover compilation Skeletons in the Closet, it’s one of the strongest, and most underrated, of Bodom's tributes. Truth be told, Children of Bodom towards the middle of their career starting to getting a reputation of being a little too cover-orientated, but it’s obvious these were done either for fun or pay tribute to the artists that inspired them.

How did we go? Did you discover any Children of Bodom tunes that you weren't familiar with? Or are there even better, more obscure tracks littered throughout their catalogue? Let us know in the comments below!