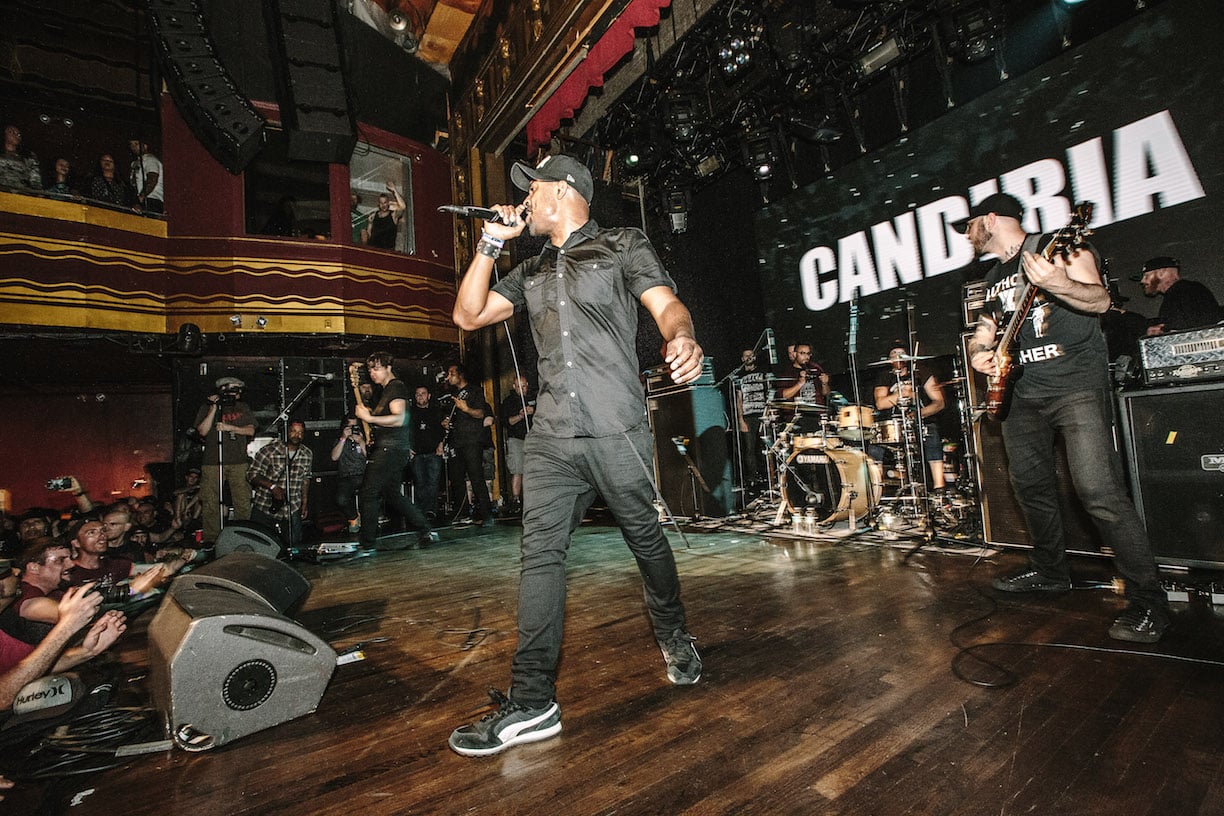 A lot of people conflate rap metal and nü-metal, but really, how many nü-metal bands rap? Perhaps the presence of turntables and baggy shorts confuses people, but influential acts like Korn, Mudvayne, and Deftones completely lacked the rap flavors of Limp Bizkit and P.O.D.. In fact, bands like Faith No More and Rage Against the Machine centered on this controversial combination before nü-metal was remotely a concept! It's worth pointing out if only to distinguish the five bands listed below.

Rap metal actually recurs in a diverse array of scenes, from progressive metalcore to UK beatdown. The common factor for the bands in this list is that they're fronted by rappers. No, not a guy trying to rap, but legitimate MCs. But these bands didn't make the list just for being fronted by rappers. They also happen to bring unique songwriting chops to the table. In short, good rap-metal requires good metal and good rap, which these bands provide in spades.

Whether they're broken up or still kicking, it's about time we acknowledge the bands that remove the stigma levied at rap metal.

Let's start with a band that made a song with MF DOOM. Yes, that MF DOOM (RIP). Turns out that Cipher's frontman Maurice Mitchell is DOOM's younger cousin (read his heartfelt tribute to DOOM here). The song they made together is nothing short of incredible and sets a president for the caliber of music this band brings to the table. The instrumentation combines metalcore with elements of progressive metal, jazz fusion and post-hardcore. Cipher's output would still destroy if Mitchell didn't rap over it. Their songwriting constantly throws curveballs, overcoming the rap metal pitfall of generic riffs.

The real gift Cipher gives is Mitchell's lyrical mind and bombastic flow. He came and went from this band a grassroots activist. His ability to speak truth to power while also delving into philosophy and afro-futurism has all the appeal of conscious hip-hop. On top of that, his flow works really well with the metalcore instrumentals without him or the rest of the band having to compromise. If anything, both the rap flow and heavy riffs are able to reach entirely new territory by playing off of each other's eccentricities. Cipher rap-metal can become much more than a crutch for bad writing.

It's rather surprising that only a few bands have capitalized on the potential of hip-hop and djent. Hacktivist was the first band to realize this branch of rap metal. They call their style "grime metal," combining the UK's regional style of hip-hop with the bottom-heavy syncopation of bands like Volumes and Periphery. The results caught on as people made comparisons to Linkin Park, but there are a few key differences that separate Hacktivist from other like-minded bands. The fact of the matter is, technical grime flow works so well with dent riffs that it's almost befuddling. Except, it makes plenty of sense, considering djent's emphasis on nasty, syncopated grooves and grime's choppy, unpredictable wordplay.

Perhaps the most relieving aspect of this band is the fact they remain disconnected to rap metal's stereotypical angst. Sure, their political slant can come off a bit on-the-nose, but it's obviously better than the pubescent tantrums of yesteryear. Having two rappers on deck doesn't hurt either, as Jot Maxi can provide more harsh vocal techniques while Jermaine 'J' Hurley can focus mostly on bars. Again, people could draw comparisons to Chester and Mike from LP, but the regional specificities and incredible chops of this two-man attack put them in a league of their own.

What a world to live in where SoundCloud rap can commingle with heavy hardcore. UnityTX quickly rose from underground following the release of their debut album Madboy and signing to Pure Noise Records. Incidentally, Madboy is listed under hip-hop/rap on Apple Music. This should prove enlightening as to UnityTX's approach. In fact, they actively fight against rap metal/nü-metal stereotypes—to the point of vocalist Jay Webster roasting YouTuber Finn McKenty for mentioning UnityTX in his video about nu metalcore. The point being, they're not trying to hop on any trends. They could care less about rap-metal and nu-metal. These guys mix streetwise hip-hop and groovy beatdowns for the sake of good, violent fun.

Webster's lyrics have a healthy mix of ignorant fight anthems and straight-talking poetry. Songs like "Walk With Me" hark back to the days where rappers told real stories about the urban struggle, while other cuts exist simply to get the crowd swinging. It's a great balance of lyrical and part hip-hop. Granted, it's not about to win over anyone who decries cloud rap or trap rap, but the vibes remain as potent as the mosh parts. UnityTX has what it takes to bring heavy hip-hop to the new generation.

Speaking of hardcore and hip-hop, one of the most notable crossover in recent years has been beatdown hardcore. The style has come a long way since its outgrowth from New York hardcore, with small scenes popping up all over the world. UK style garnered an unprecedented reputation, and it's also where the hip-hop element began to shine more. Plenty of New York hardcore bands had a hip-hop aesthetic, but let's be real; none of those bands were rapping. Talking loudly isn't rapping (as much as boomers want to think it is). The difference with the UK bands like Street Soldier and Recount is their unabashed influence from rap—which ultimately traces back to Gassed Up.

Much like Hacktivist, vocalist Dan Crossley wears his grime rap influences proudly. If Nasty was the band that first brought beatdown to Wacken Open Air stages, then Gassed Up was the first to make it a credible rap-metal crossover. Crossley's flow is lethal, whether it's over grime production or heavy hardcore riffs. Gassed Up's is very much in the wheelhouse of UK beatdown: heavy palm-muted chords that often become straight-up slam riffs. It's not particularly complicated, but people who deny the possibility of rapping over it aren't paying attention. Where a band like Limp Bizkit struggled to appeal to either end of the spectrum, it's arguable that the only reason Gassed Up hasn't become a staple of hip-hop and hardcore playlists alike is not enough people hearing their songs.

Candiria might not play rap-metal anymore, but their first few records sent the bar for the style into space before most people knew about the term. We're talking about a band that Meshuggah requested to play with when they came to the US. Rap and metal is only one facet of the style these guys came upon. If a jazz fusion band decided to play music for East Coast hardcore clubs while fronted by an ill MC, you'd have a decent roadmap for Candiria's first albums. Like Meshuggah vocalist Jens Kidman, Candiria's Carley Coma would map out his rhymes to the constantly-changing time signatures the band would come up with. He, ex-drummer Kenneth Schalk and bassist Michael MacIvor would lock up in ways as unexpected as they were satisfying.

Rap metal often begs the question, would the rap and metal on this record sound good by themselves? In the case of Candiria, the inclusion of improvisation and experimentation makes THE metal and rap stand out from anyone else. To sound like a souped-up Yellowjackets, get the pit started with an awesome breakdown, and then drop into a nasty groove to service Coma's lyrical prowess is just a class unto itself. Lyrics like "Check the vertical damages/ We'll wrap you up in bandages, for real/ My heart is made of flesh/ My tongue of steel" would keep most lyrical hip-hop fans coming back for more. Meanwhile, lots of metal and hardcore musicians are still in awe of what these guys accomplished and still accomplish to this day.