Holy shit, it's the end of the year already. Where did it go? What even came out this year? There are a couple reasons this is an issue. There was barely enough time to keep up with what was coming out. The second issue was remembering what really wowed this year.

Before we start properly looking forward to 2019, let's take a look back and I'll tell you what you may have missed this year.

Has there ever been a band that writes songs about everyday life so consistently? DO is the fifth album from comedy metalcore band Psychostick and it's wonderful. It's 22 songs of pure nonsense, but everyone can relate to this album. With “Tuesday”, a song literally dedicated to the “most average day of the week” and “Thinkin’ With Yer D” which is a song any guy (or girl) who went through puberty can relate to. On top of the great songs about average things, Psychostick are also known for their skits that break up the album. On Do the skit is the writing process for a song called “Got No Brakes”. Needless to say, the writing process of a song is a pure shit show. Just like boats, this album has no brakes.

For you, Power Metal fans, Follow the Cipher may have unfortunately slipped you by. The band was started by guitarist Ken Kängström, who's known for contributing to the writing of some of the most well known Sabaton tracks. Specifically “Carolus Rex”, which was covered on this album as well. Vocalist Linda Toni Grahn added a ton of power to the band's debut album. “Enter the Cipher”, “Valkyries” and a few others show off Grahn's sheer strength as a vocalist. The real treat comes on the slower songs “Titan's Call” and the aforementioned cover of “Carolus Rex”. Grahn's vocals are haunting, adding so much more emotion to the music than most tenured vocalists manage to.

Here's the heaviest band that played the final Warped Tour. Nekrogoblikon came out of the gates strong with Welcome to Bonkers. Melodic death metal will always be a soft spot of mine and this is essentially the “how-to” guidebook for melodic death metal. The singles off the album showed they were channeling those The Black Dahlia Murder vibes with “Mold”, “The Skin Thief”, and “Dressed As Goblins”. There was so much more to this album though, “The Magic Spider” for instance is a mostly clean singing song that sounds like it could be a child's lullaby for the majority of the intro. When the song kicks into speed it's a wild song about going on a journey to find a magic spider. Listen, I'm not saying this is gonna make sense, it's a band whose hype man is a goblin obsessed with Chili's, but this album kicks more ass than your favourite album of the year.

Æpoch's debut release Awakening Inception is a monsterous technical death metal album. I watched this album progress from the early stages of simple ideas, to full instrumentals and to their final album versions. Æpoch released “Tabula Rasa” as their debut single from this release and since it came out digitally, I haven't been able to get it out of my rotation. “Delirium of Negation” and “Sirenity of Non-Existence” have received a ton of praise amongst hardcore death metal fans. If you're more into the blackened death feel, “Burn Them at the Stakes” mixes Death with Behemoth and then cranks up the riffs. This is a band you should definitely keep an eye out for in the future if you're a death metal fan.

6. Rivers of Nihil – Where Owls Know My Name

Everyone knows this one and if you don't, have you been living under a rock? Where Owls Know My Name seems to have split the fanbase of Rivers of Nihil. Some fans seem to think it's their weakest outing yet. I would argue the opposite. I was fascinated with this band after catching them with Beyond Creation, but no matter how much I listened to their studio stuff, I was kind of numb to it. Where Owls Know My Name though is a crazy album from start to finish. This is a journey of an album, I would argue where it lacks is the songs are very much meant to be listened to in order, in full. This is an album that should be listened to beginning to end and now for its individual tracks. If you were turned off by the singles, jam the whole album, you'll see the light. Plus, saxophones, super metal.

Do you like melodic death metal and dinosaurs? Of course you do. Do you think Jurassic Park should have a soundtrack written by a death metal band? Well, here you go. Invicta dropped their EP The Executioner in the first half of 2018 and it's only gotten more traction as the year continues. “Prehistoric Suffocation” is literally about dead dinosaurs, there's not really much else to say about it past that. This EP is nothing, but riffs on riffs and if you like riffs, you'll love The Executioner.

One of the albums that stuck with me from our middle of the year lists, Watain made a massive return to form with Trident-Wolf-Eclipse. Straying from their more unconventional sound on their last effort, The Wild Hunt, this album was aggressive and bloodthirsty. It was clear from the release of the first single, “Nuclear Alchemy”, what we could expect from this album. More like the first couple albums, this was a pure, aggressive black metal record.

A crossover between thrash and some hardcore tones, Black Fast kill it in pure aggression alone. Following up their acclaimed Starving Out the Light, Specter of Ruin takes everything the band did previously and turns it up to max. There's not a whole lot to say, if you're a fan of Black Fast you absolutely should pick this up before the year is out. If you're just looking for music to break things too, this the most pissed off sounding record of 2018.

Easily the top EP of the year comes from Kitchener, Ontario's Raider. I included this in my mid year list as well and for a damn good reason. For all you melodic death metal fans out there, specifically if you're into early Amon Amarth this is for you. Raider is all about pillaging, murdering and destroying everything in your path. If your neck doesn't hurt after listening to this one, I don't need you around here, I don't need that kind of negativity in my life.

This one came out of nowhere and I'm thrilled that it did. I was a big fan of Abbath as a vocalist for Immortal. I could not stand Demonaz as a vocalist on March of the Norse. Hearing Abbath would no longer be a part of Immortal and Demonaz would be leading the charge made me super skeptical, to say the least. That being said, Northern Chaos Gods was exactly what I needed in my life in 2018. To put it simply, Northern Chaos Gods sounds as intense as At The Heart of Winter, the absolute best Immortal album to come out. From beginning to end, this album sounds like old school Immortal and Demonaz made it very clear, he wanted Immortal to remain Immortal. If you hesitated on this album because of the lack of Abbath, change your tone. All Immortal proved with Northern Chaos Gods is that there was a whole lot more to the band than Abbath. If you need proof, “Mighty Ravendark” will change your mind. 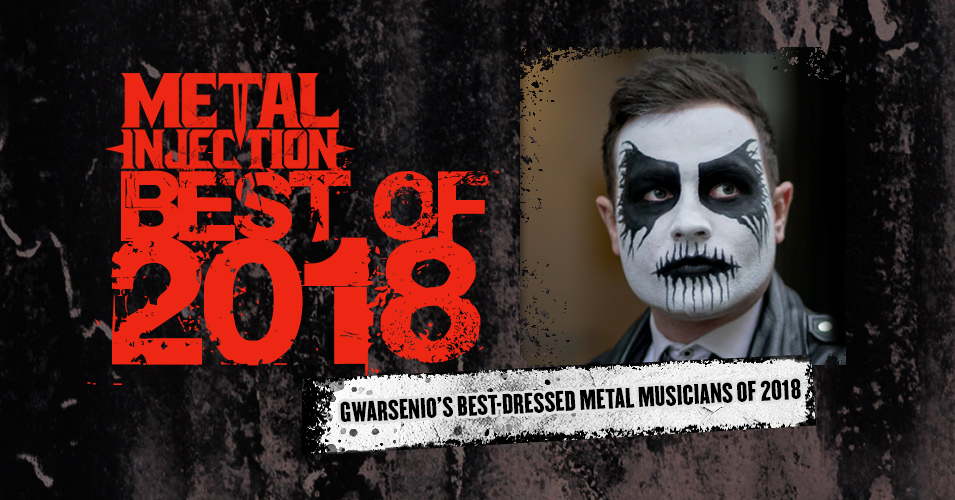 The following is a guest post submitted by Two Minutes to Late Night's host, Gwarsenio Hall – who just needed to get this damn thing...

What a wild year.

Over 100,000 votes cast by Metal Injection junkies to determine this year's winners.

The Black Dahlia Murder frontman with a late entry for his favorite albums of the year.