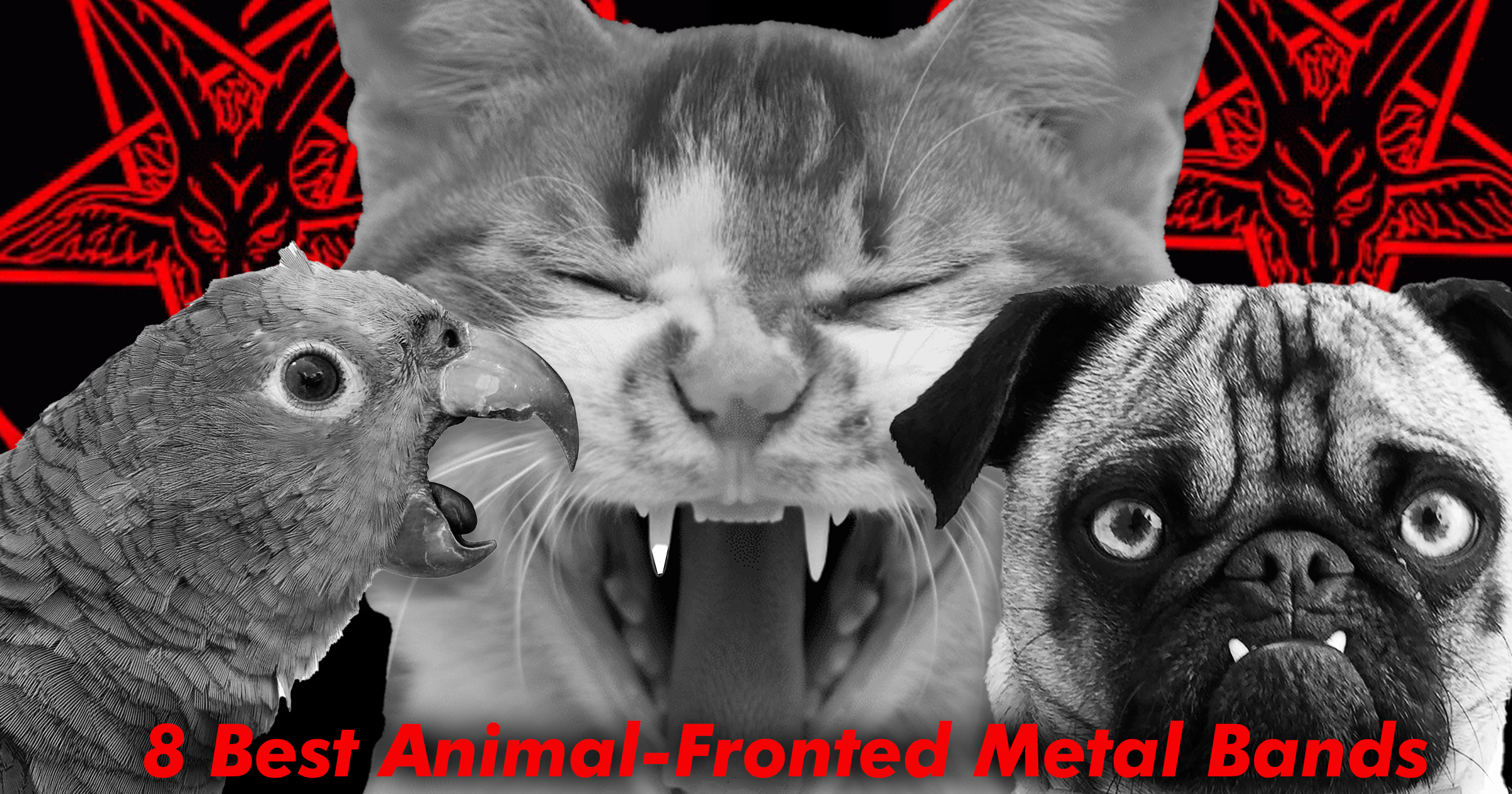 Animals. Who doesn’t love them? They’ve given us joy self-reflection and unconditional love. It is entirely possible that we would still be living in caves if it wasn’t for animal companionship. Metal has had a complicated relationship with animals over the years, from Ozzy Osbourne’s infamous bat-biting incident to Gojira’s iconic “Flying Whales” intro. But in rare cases, animals themselves have been on the frontlines of metal. Here are Metal Injection’s 8 Best Animal-Fronted Metal Bands:

No list of animal-fronted bands would be complete without Hatebeak. Led by an African Grey Parrot named Waldo, Hatebeak have made five releases to date, the most recent being Birdhouse by the Cemetary in 2018. The band never tour to avoid traumatizing their feathered singer, but Waldo’s screeches fit right in with Hatebeak’s grindcore sound. African Grey Parrots can live up to one hundred years. That means Waldo could still be making music long after his owners Blake Harrison and Mark Sloan are gone. Who knows? Perhaps one day Waldo will be the last remaining spokesperson for 2000s metal.

Sadly, the two pitbulls that fronted Caninus have passed from this world. Budgie and Basil made three releases in their short time on this earth, including a split with Cattle Decapitation in 2005. They were owned by My Precious Blood guitarist and NYC council member Justin Brannan and were active between 2003 and 2011. Caninus may be gone, but we will always have Now The Animals Have A Voice to remember them by. They say all dogs go to heaven, but Budgie and Basil will be sitting by the right hand of the Grand Prince of Hell.

“I knew Roope-Shakir had star power the moment he entered my apartment,” says Cattera representative (and Fearless Records product manager) Anna Mrzyglocki. “I heard his emotion-filled meows and knew he needed to be the front cat of a metal band.” As the newest members of the exclusive animal-fronted club, Cattera released Hunger of the Beast earlier this year. Fronted by a rotating lineup of NYC street cats, the band brings all their feline talent to the forefront to deliver a classic groove metal sound. We tried to reach out to the cats themselves, but they aren’t taking our calls. We’re sure that if they could answer us, they wouldn’t. Typical fur babies….

Who hasn’t looked into a pug’s squashed face and thought “You should sing black metal”? Pupcake Lövbacken has been snorting lead for Pugtopsy since 2013. Led by Pupcake’s underbite (underbites are metal, we checked) the band has donated their merch money to Neuterhead: Ace of Spays, a non-profit animal rescue organization that spays and neuters stray animals to prevent overpopulation.

Insect Grinder are what nightmares are made of. The Russian experimental grindcore project captures the sounds of a swarm of crickets trapped in a jar while heavy music blasts all around them. Through clicks, chirps, rustles and hisses, it might be the most unsettling band on this list. Anybody who had ever lived in a cockroach-infested apartment will get flashbacks at the scurrying noises that fill EPs Global Kill Panic and Moment of Torment. Be sure to fumigate your house after listening.

As pets of former Death drummer Richard Christy, guinea pigs Tico, Taco and Sugar already have more street cred than most of the bands on this list. Böar Glüe sound like brutal death metal being played in the smelliest corner of the pet store over the unique sounds of these little rodents. Boar glue also a name for guinea pig semen, which guinea pigs excrete in such massive amounts that their owners regularly need to brush it out of their fur. No seriously. We looked it up. Don’t Google it. We beg you.

The pig squeal has become its own artform in the outer fringes of the metal world. China’s Pig Cage cut out the middleman and have simply added recordings of swine at local farms over their music. The Chinese government looks poorly on this practice (we can’t fathom why), which prevents Pig Cage’s Screaming Pig in China from being uploaded to YouTube. Check out their Bandcamp page to support this madman in all his hog-related endeavors.

Okay, we cheated on this one. But Psychostick’s “Six Pounds of Terror” is too good to miss out on. Anybody with a tiny dog knows how ferocious the little buggers can be. Hearing Nicholas go to town on his chew toy is the perfect inspiration for a hardcore song. The band breaks down into laughter by the end, but not before we’ve heard the vicious little monster channel his wolf ancestors into the performance of a lifetime.