15 Unlikely Covers By Extreme Metal Bands That Actually Rule
With the season finale happening this Sunday, we celebrate our favorite metal songs inspired by the hit HBO series.

Fantasy and metal have grown up with one another. Black Sabbath and Led Zeppelin were singing about wizards and orcs way back in the 70’s when the genre was still young. Since then, some bands’ entire catalogs have been thematically rooted in tales, swords, and sorcery. These bands fueled their inspiration for epic and fantastical lyrics from the stories in novels, movies, and video games. Now that HBO’s Game of Thrones is the most popular fantasy standard, some metalhead’s imaginations have run wild dreaming of the wars over the Iron Throne.

Be honest with yourself. When a bunch of armored giants ride mammoths into battle, don't you quietly whisper to yourself, "That's so Metal.”? Hopefully, one day, an uber-nerd with a lot of free time will put together a fan edit of the show where the regular soundtrack is replaced with Manowar. Until that happens, let's take a look at some of the great metal inspired by The Song of Ice and Fire.

The Sword "To Take the Black"
If metalheads existed in Westeros, we'd all be in the Night’s Watch. They're honor-bound badasses who fight zombies and, most importantly, always wear black.
And how can you not love the Sword? They’re the world's premier stoner metal band and their distinct retro sound is timeless. They may have moved on to writing space rock concept albums, but their first records were deeply entrenched in fantasy themes including this ode to the unsung heroes of the Wall.

And now, for some Targaryen Metal! Morning Starlett is a power metal band from Staten Island that's actually a project of the current Blue Oyster Cult guitarist Richie Castellano. Their singer Ann Marie Nacchio is a classically trained opera singer, and her powerful voice properly captures the determined spirit of Daenerys herself. Also, no song about dragons would be complete without blistering guitar solos. The most surprising thing about this son is that there aren’t any fan made Youtube videos of Daenerys and her dragons set to this song yet.

Winterfell "Winter is Coming"
You’re clearly a George R. R. Martin fan when you take your band name straight out of the pages of his books. Winterfell are a long-dormant prog band that last released their last fantasy-flavored metal a decade ago. While their lyrics are a pretty obvious tribute to the Stark Family, their music is thunderous yet melodic and sounds like a metal symphony.

Seven Kingdoms "After the Fall"
Advertisement. Scroll to continue reading.

This American power metal band has drawn inspiration for most of their songs from the works of George R. R. Martin. Even their name is an allusion to the continent of Westeros itself. This song is notable because it’s about Bran Stark who just doesn't get much love from Game of Thrones fans. Hodor is more popular than Bran, and he's just the dude that carries him around. After the Fall is about Bran’s visions that he sees through the eyes of ravens when he’s using his powers as a warg. Even that description sounds metal as hell. 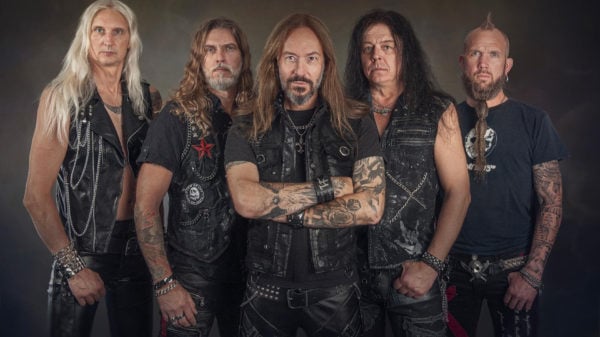 HAMMERFALL Teams With KING DIAMOND For New Single "Venerate Me"

The hammer of dawn is coming.