6 Indigenous Metal Bands You Need to Know About 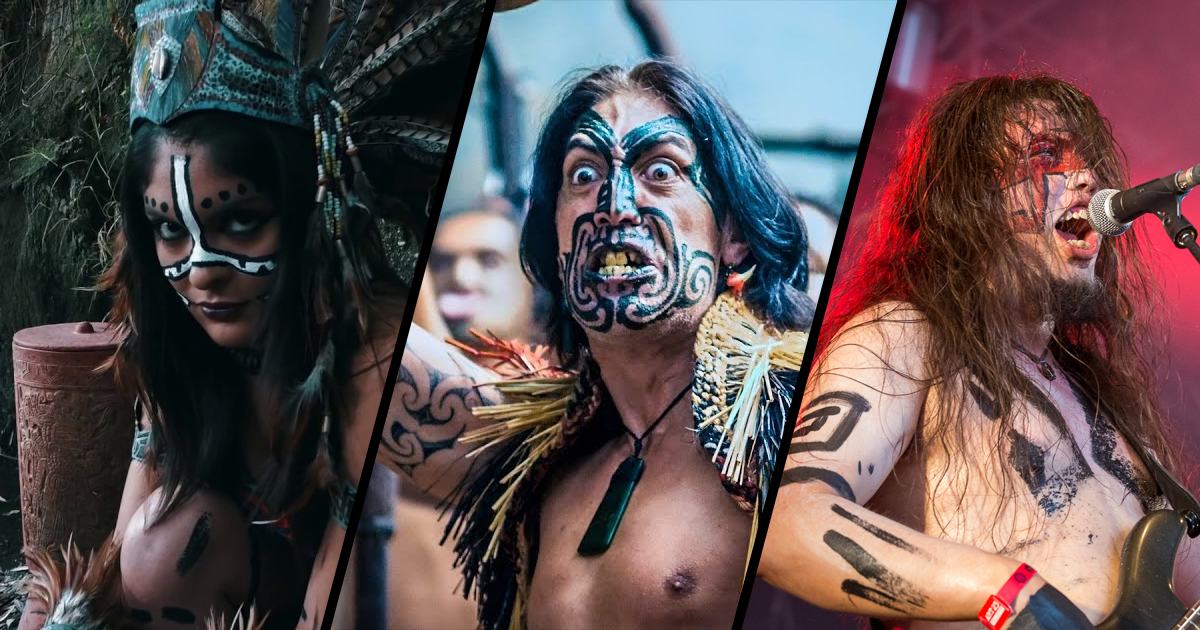 The metal genre has long been a place where bands from every part of the world could explore their cultural heritage, whether that's Amon Amarth singing about Vikings or The Hu blending metal with Mongolian throat singing. Therefore, it should come as no surprise that there's a rich collection of metal music from various indigenous and/or colonized cultures that may have slipped most people's radar. In celebration of Indigenous People's Day in the United States, here are six indigenous metal bands that you need to check out right now.

Representing the Tsimshian people in the Pacific Northwest region, Gyibaaw is a black/death metal outfit that sings mostly in their native language of S'malygax. Their sound is stripped-down and sinister, and incorporates some elements of traditional flute playing. They are in the process of preparing their "first new release in a decade," of which the profits will be donated to charities benefiting First Nations peoples. However, you can listen to their 2010 album Ancestral War Hymns here:

The de-facto standard bearers for "rez metal" ("rez" short for "reservation"), Testify from the Southeastern Navajo reservation in New Mexico have made it their mission to inspire Native youths with their positive message. Their '80s-inspired track "Live for Something, Die for Nothing" is a huge-sounding anthem with an empowering message, which you can listen to on their Reverbnation page. Check out their acoustic song "Codes of Honor," celebrating the Navajo code talkers who served in World War II:

Nechochwen is a Lenape name that means "walks alone," according to frontman Aaron Carey, the folk/black metal duo's founding member. Inspired by a deep love and fascination for the Native history and mythos of West Virginia, Nechochwen's lyrics delve into the ancient stories of Carey's ancestors. Metal Injection reviewed their brilliant split with Panopticon, which you can listen to here:

Coming from the grindcore and crust punk side of things, Resistant Culture is a militant and unapologetic advocate for Native rights. They've been around since the mid 1980's when they started out as Resistant Militia, and it really shows in their musical chops. Their most recent release "Shadowed Man" is tight, polished, and crushingly heavy. Previous releases have incorporated Native environmental sounds and traditional instruments with themes of resistance to oppression, and nature rising up to exact vengeance on man.

Representing the pre-Hispanic indigenous cultures of Mexico, Cemican draws upon Aztec mythology and a wide gamut of traditional instrumentation to create their aggressive brand of folk metal. The band makes liberal, artful use of theatrics in their live show, performing in stylized Aztec warrior's armor. Fittingly, Cemican is a Nahuatl word that means "the duality of life and death." Watch their music video for "Mixteco" here:

Probably the most commercially successful act on this list, Alien Weaponry is a sort-of thrash, sort-of metalcore band from New Zealand that makes a huge effort to promote the Maori culture and language. The band's three members all share Maori heritage, and they sing much of their music in Te Reo Māori (the Maori language). Their music video for "Kai Tangata" is a cinematic gem that recreates the 19th Century "musket wars," in which the introduction of European weapons added a grisly new dimension to Maori warfare.

We've seen indigenous musicians in metal before such as Testament's Chuck Billy or Anthrax's Joey Belladonna, who sang their classic thrash staple "Indians" about the history of Native subjugation. However, it's cool to see bands today gaining traction representing all sorts of indigenous backgrounds and explicitly tackling Native themes and issues. Observe Indigenous People's Day the right way by supporting their music on streaming platforms!