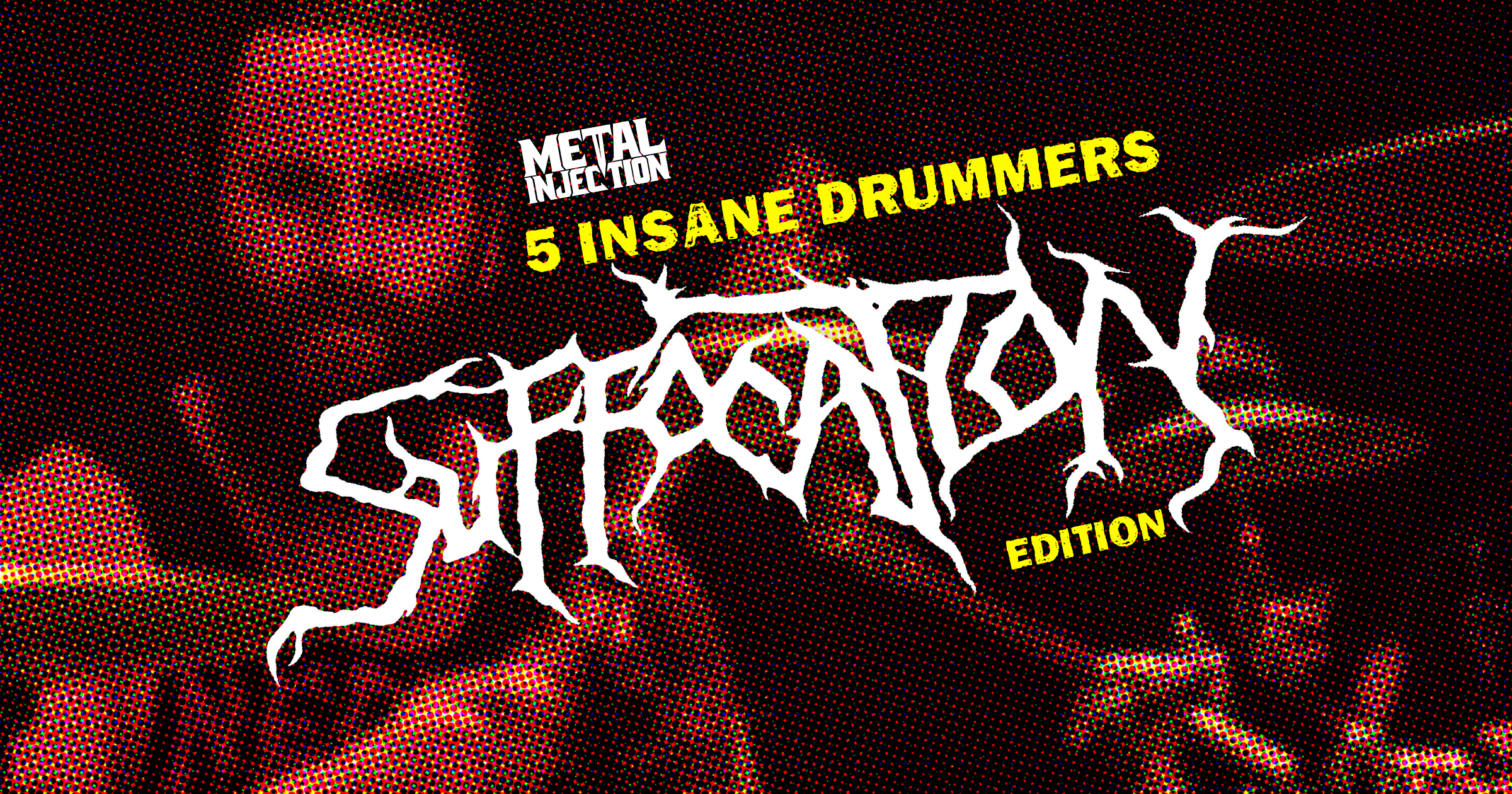 We all know that today, extreme metal drumming is like a goddamn action sport. Modern death metal drummers, in particular, are just, they’re going for it, man! Suffocation exists in a weird spot, serving as both pioneering genre legends AND as an active 21st-century workhorse. They’ve also had an ungodly amount of insane drummers blasting behind the kit for them over the years.

Suffocation's original drummer helped innovate the blast beat; while their current drummer is pushing double bass speeds to ludicrous new levels. In short, Suffocation has had nothing but ace drummers in their ranks. This list is a celebration of the band’s cymbal shattering heroes. We’re going in chronological order, highlighting a classic Suffocation number that each drummer has played live [and for which somewhat decent YouTube footage exists] for your head banging, air drumming pleasure. Let the games begin!

What can be said about Mike Smith that hasn’t already been said? He’s the original, the man who wrote the blueprint for modern death metal drumming on Suffocation's landmark debut album, 1991's Effigy of the Forgotten. Inventor of the “Suffo-blast” [syncopated snare & cymbal hits] with forearms of steel, injector of thrash beats/rad drum fills amidst the bludgeoning beat-down that was, early 90’s Suffocation; and let's not forget Smith's awesome left handed ride cymbal setup, inspiring southpaws around the globe. Over the years, Smith has exited, rejoined and left Suffocation again. While it’s been 8 years since his last tour of duty with the band, like Dave Lombardo is to Slayer, you simply cannot talk about Suffocation without mentioning Mike Smith’s playing. He’s currently bashing [drum] heads in Voracious Scourge BTW, check their new album out here.

Mike Smith playing “Pierced From Within”

Doug Bohn had the arduous task of replacing Mike Smith when he first left Suffocation in 1994. How did he do? He knocked it out of the friggin’ park! Bohn played drums on Suffocation’s third full length album, 1995’s technical meets brutal death masterpiece, Pierced From Within, and the metal realm was a better place for it. Bohn’s playing on this record is beyond criminally underrated, it’s [wipes tears from eyes] some of the best, grooviest damn death metal drumming you’ll ever hear. Fun fact, nobody else on this list plays the titular/comparison track “Pierced From Within” quite like Bohn does. Pierced has this iconic blast in the beginning of the song that everyone and their mom plays as a two handed roll on the snare. This clearly results in more powerful strokes and translates better in a live concert setting but Bohn wrote/recorded this blast as a cool one handed drag on the snare. Thank heavens for Bohn’s YouTube channel for shedding light onto nerdy drum shit like this!

After Doug Bohn’s departure in 1995, Dave Culross came onboard and his frenzied playing brought Suffocation’s brutality quotient to a whole new level, culminating with the band’s landmark [temporary] farewell EP, 1998’s Despise The Sun. For its day, hell even by current standards, Culross’ playing is straight up mind boggling. This man is the definition of speed and power. Insane double bass runs plus a smorgasbord of blast beats, Culross’ playing with Suffocation [aaaand Malevolent Creation] is like a demarcation line between old school and modern day extreme metal drumming. There’s a reason why drum gods like John Longstreth and Kevin Talley [more on Talley later…] idolized Culross while coming up; he’s an absolute monster behind the kit. As fate would have it, Culross rejoined the band to record Suffocation’s 2013 ripper, Pinnacle of Bedlam; only to vanish without a trace from the metal world after. Our diligent, investigative journalist skills has unearthed Culross’ current whereabouts. Taken from the comments section of this awesome “Catatonia” drum cam video ; Culross appears to be alive and well, chilling at home.

Dave Culross playing “Pierced From Within”

Kevin Talley joined Suffocation after Dave Culross left the band in 2014. By this point, Talley was already a well-established drum phenom in his own right [Previously manning the kit for Dying Fetus, Misery Index, Daath, Chimaira, Six Feet Under and filling in live for a zillion other bands] so him joining Suffocation was kind of perfect. His playing really accented the grooves in classic Suffo tracks while keeping the speed and power of their modern tunes intact. Talley’s tenure with the band was short lived however, making his exit after two years on the road in 2016. He might not have played on any Suffocation studio recordings, but he did play a shit load of concerts with the band and left us with killer live footage on his YouTube channel, located here.

Kevin Talley playing “Pierced From Within”

The current, and one of the fastest drummers in Suffocation’s long line of crazy talented time keepers, is Mr. Eric Morotti. He joined the NYDM legends in 2016, left his mark on their 2017 full length album …Of The Dark Light, and has been ripping the modern drumming world to shreds with his insanely precise double stroke foot technique. Double strokes have been all the rage in the metal realm since John Longstreth tore a hole in the space time continuum on Origin’s Antithesis record; and Eric Morotti has mastered this BPM shattering art form like few others, utilizing said technique to bump the shit out of classic Suffocation songs as well as the crazy new material he crafted on their last record. Morotti hits hard, plays crazy fucking fast, and has a seemingly unlimited supply of energy behind the kit. Barely in his late 20’s, Suffocation’s latest drum shredder is a relative spring chicken compared to other, veteran members of the metal community [this author included -cracks neck-] so it appears that Mr. Morotti has a long, promising road of annihilating drum heads in his future.

Eric Morotti playing “Pierced From Within”

BONUS CLIP OF ERIC KILLING "JESUS WEPT" CUZ WHY NOT?!

WHO IS YOUR FAVORITE SUFFOCATION DRUMMER? WHAT OTHER BANDS HAVE NOTHING BUT KILLER DRUMMERS ? LET US KNOW!