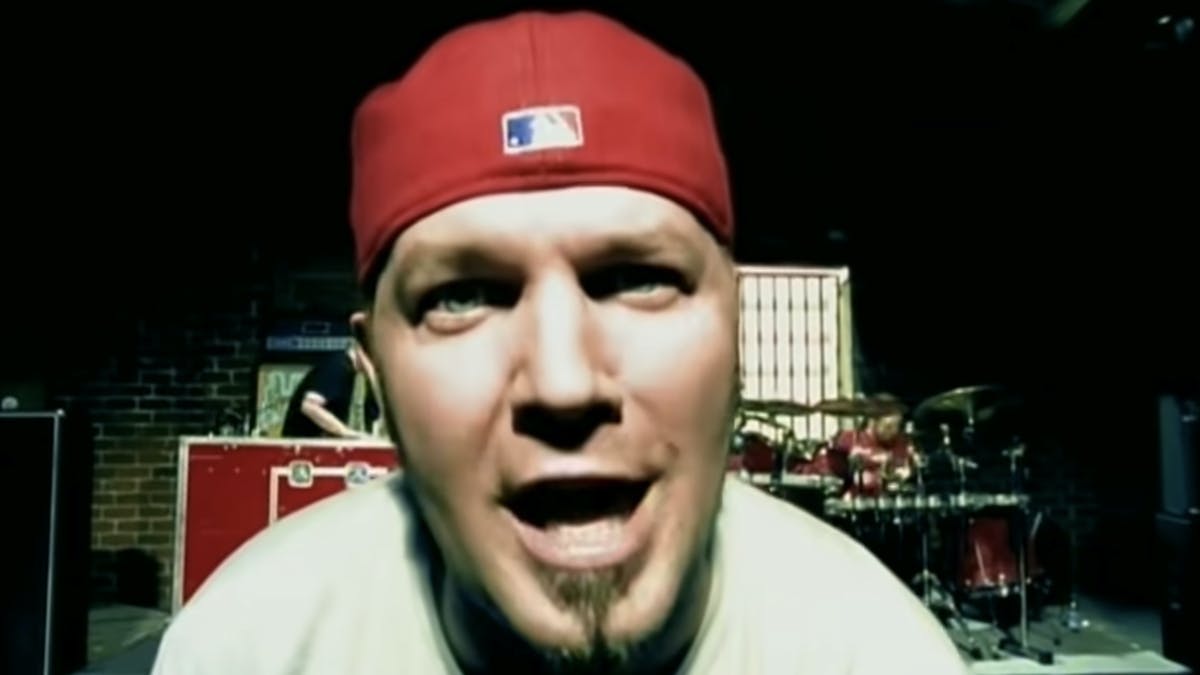 They are maligned by many within the metal community but loved by diehard fans around the world. Of course, several bands spring to mind under this criteria, however, few bands live up to this moniker quite like Jacksonville, Florida's own Limp Bizkit. The five-piece's rise to prominence was a quick one thanks to their unique brand of metal – a style that would soon fall under the umbrella of nu-metal.

Coming off the back of "Dad Vibes" and allegedly due to drop a new album imminently, we thought what better time than now to pluck out some obscurities that may have eluded even the most hardcore of fans. Whether they were unreleased, received unfair criticism, or have rarely featured in the band's setlist, there are several candidates to consider spanning across the band's 25+ year career.

So without further do, let's dive into a discography of ups and downs as we bring to you our picks for the 10 Most Underrated Limp Bizkit Songs. Because, you know… It's Limp Bizkit!

Probably more recognisable to wrestling audiences, this promotional Limp Bizkit song served as the main theme for WWE’s Wrestlemania XIX event, but beyond this, it never really garnered much traction. With Wes Borland out of the mix, string duties were handled by Snot guitarist Mike Smith. The finished product falls somewhere in-between their signature hip-hop leanings and a much more aggressive guitar sound. It doesn’t rewrite the rulebook by any means but it is undoubtedly infectious thanks to some rip-roaring hooks. Ironically, while it may be one of their most underrated tracks overall, “Crack Addict” also features some of the most bog-standard lyrics ever conjured up by Durst. Besides that, this is a perfectly serviceable track for fans of the group – certainly good enough to have made the cut on the band’s pretty abysmal 2003 effort Results May Vary.

9. The One (Chocolate Starfish and the Hot Dog Flavored Water, 2000)

Being featured on an album that also included “Rollin’,” “My Generation,” “My Way,” and “Take A Look Around” was always going to prove to be an uphill battle for any other track to get the spotlight. It’s a shame too because album cut “The One” is easily one of the best songs on the LP. There's a sense of real sincerity in the vocals here – something which it could be argued has sounded forced in some of the group's other softer tracks. It’s a wonderful rhythm section though that really takes "The One" up to a higher plateau. It sees bassist Sam Rivers float in and out of pockets unoccupied by Borland's watery guitar textures. It's arguably the most blissful musical composition ever put together by the five-piece thanks to the interweaving and interlocking instrumentation. Were it not featured on the band’s biggest and most popular record, you could expect to see this mellow stunner much higher up on the list. Just remember to do yourself a favour and stop the song at the 3:41 mark – you’ll thank me for it…

The influence of then-contemporaries such as Deftones and Hed PE can be heard all over this schizophrenic composition. Buried deep into the tracklisting of highly influential debut album Three Dollar Bill, Y'all, the raw and savage “Clunk” has barely been featured in the live setlist since 1998. Nevertheless, this is a combustible piece of music from a band with a point to prove at the time. Not to mention, the breakdown on “Clunk” is one of the most in-your-face breakdowns you’re ever likely to hear from the nu-metal era, with the band momentarily stopping throughout it, before dropping back in again to bring the heavy. This cliff-edge approach permeates the entire track, never allowing the listener to completely get a grasp of it by constantly switching up sections and instrumentation. It’s certainly a more intricate approach that the band would mostly drop by the time Significant Other came around in 1999.

Sparingly released singles is something which fans of the band have had to become accustomed to in recent years, with tracks like "Ready to Go" and just recently “Dad Vibes” being released years apart from one another. However, perhaps their most eyebrow-raising standalone release of the bunch was the 2014 genre-hopper “Endless Slaughter.” It’s all over the place musically and its flaws are certainly glaring at times which is why it received very mixed opinion upon release. The worst part of ”Endless Slaughter” comes in the first verse thanks to Durst doing his best Lil Wayne impersonation but failing rather spectacularly. This contrived section eventually gives way to a punchy pre-chorus before finishing the track’s first section with a fist-pumping chorus. From there, the outfit veer from a lengthy psychedelia-tinged movement, to a ballsy Guns n’ Roses hard rock sound, to a more familiar hip-hop portion to close out the proceedings. It’s experimentally confused for sure, lacking the true conviction or artistry of a true outsider collective, but at least its an attempt to mix-up their traditional style. If you go in aware of the missteps, there are certainly some redeeming features to be found in this bizarre free-for-all.

Durst doesn't appear to be a big fan of much on this driving cut from the group's underground 2005 EP entitled The Unquestionable Truth Part 1. This raw and uncompromising thumper of a song finds LP in their element thanks to one of the meatiest and most satisfying riffs the band has ever delivered. Walloping drum rolls pepper this one, helping to give it an effective call-to-arms feel. Make no mistake though, Borland leads the assault with a fierce riff here, expertly utilising pinch harmonics with a guitar tone so gnarly that it reverberates through the listener’s body. All of these positives aren’t derailed, but rather, accentuated by an aggressive and pissed off performance by Durst. He keeps the attempts at humour at a minimum here – something which this no-nonsense battering ram needed.

Another very solid track which unfortunately hit the cutting room floor during the sessions for Results May Vary was the alt-metal EU Edition exclusive “Shot.” Right off the bat, it sounds like Durst was listening to a lot of Helmet during the making of this song with his understated vocal melodies in the verses peppering Smith’s stop-start guitar groove. The band manage to pack in two effective choruses – the first of which sees Durst angrily belt out the song title and the latter of which closes out the song with some genuine feeling behind it. Again, it’s pretty straightforward and simplistic in its arrangement but it’s also a welcome adrenaline shot (pun intended) in the arm.

2011’s Gold Cobra marked the first recorded material from the original line-up in over 10 years. They waste no time either getting back into their groove. On opening song “Bring it Back,” guitar-wielding renegade Wes Borland shows just how important he is in the configuration of the group, with not just one, but two of the heaviest nu-metal riffs this side of 1999. Borland delivers a decapitating lurching guitar line for the verse, before downright shredding throughout the track’s bombastic chorus. The percussion section also deserves a special shoutout for seamlessly switching from a hard hip-hop trap beat to a live drum-kit workout courtesy of band stalwart John Otto. Clocking in at just 2:18, "Bring it Back" tends to get overshadowed by the album's main single which happens to follow it in the tracklisting. Regardless, this is deceptively simple but effective stuff.

For many music aficionados, Borland is that special ingredient in the Limp Bizkit mix, however, don’t overlook the contributions of DJ Lethal. The talented musician and producer has had a vital role to play in cementing the band’s hip-hop informed backbone – something which is there for all to see on this killer track featured on the soundtrack to the 1999 horror romp End of Days. Featuring just Durst and Lethal, the song lacks the usual instrumental barrage commonly associated with the group. If anything though, the omission of guitars is actually its greatest strength with much more focus being put on the skills of DJ Lethal behind the turntables. “Crushed” is supremely well layered, textured, and (more importantly) produced, made all the more appealing thanks to the evident chemistry between Durst and Lethal. Durst delivers one of his most infectious vocal performances, expertly riding the solid foundations laid down by his fellow band member. Overall, this is a criminally overlooked composition.

If nu-metal and grunge merged into each other, it would probably sound something close to “Nobody Like You.” Serving as the centrepiece to Significant Other, this epic tune features stellar guest vocals from Jonathan Davis and the late, great Scott Weiland. Sandwiched between a litany of breakthrough songs from the record, “Nobody Like You” takes a more serious tone than much of the album does, teetering on the brink of collapse through a faint Middle Eastern-influenced guitar line and some sparse stick-work behind the drum kit. The spotlight here is clearly designated to the vocalists – and they don’t disappoint it has to be said. They explode into life on the chorus, with Weiland stealing the show with some truly eerie vocal melodies. The song is generally under-appreciated, but the fact that it’s never even been performed live makes it even more underrated in the Limp Bizkit canon. Solid songwriting, pristine production, and powerful performances all add up to make this one of the best songs ever put out by the five-piece.

Imagine accepting the truth? Durst leaves the frat-boy mentality at home on “The Truth,” instead focusing his energy and rage on themes of a more political nature. It is hard to take seriously at times (particularly when Durst recites the Lord’s Prayer) but the instrumentation is heartfelt enough to overcome this hurdle, ultimately helping to give an average vocal performance some extra oomph. From the sublime bass-laden intro that opens the track to the explosive riff that sparks it into life, everything is on-point on this seismic shockwave of a song. It’s as raw as anything the group has ever put together, omitting the usual bells and whistles that typically overloads their work. Limp Bizkit fan or not, there’s much to be admired in this rousing anthem – arguably remaining their most underrated piece of material to date.

Which Limp Bizkit tracks do you feel don’t get the credit they deserve? Let us know in the comments!