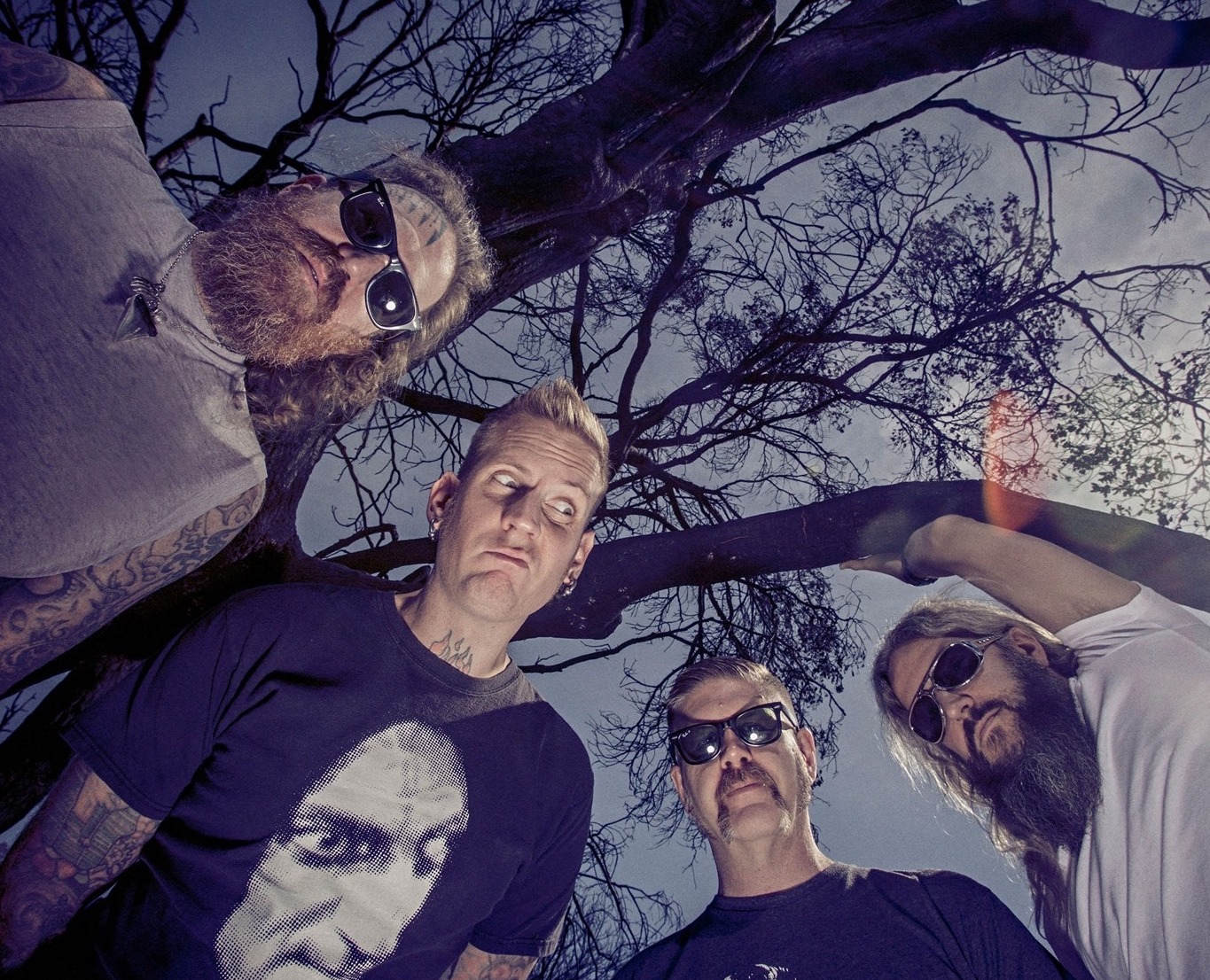 In their two decade-plus existence Atlanta’s Mastodon have gone from being underground legends, to one of the biggest guitar bands roaming the earth. Seven albums deep, with number eight right around the corner, there are plenty of lesser-heard tracks and forgotten curios that even the most loyal fan may have missed or forgotten about.

Mastodon even released a rarities compilation Medium Rarities back a lifetime ago in 2020. But today we're not going to just focus on the obscure, but also the forgotten and under-appreciated. With Mastodon’s newest album Hushed and Grim out on the 29th of October, now’s a good a time to bust out the shovel and dig for some deep cuts…

Call of the Mastodon

The sludgy groove, Brann Dailor’s rolling drums and Brent Hinds country licks – all the hallmarks that would define Mastodon’s early sound is on full display on this kind-of self-titled track. Originally featuring on their original 2000 9 Song Demo release, “Call of the Mastodon” reared it’s head again on the repackaged Call of the Mastodon collection in 2006, yet hasn’t been performed live in over two decades. With the band picking up so many new fans from their previous three albums, Call of the Mastodon deserves some serious revisiting, and it’s title tune is an important part of Mastodon’s evolution.

Closing their raw debut Remission with a darkly soothing instrumental piece, “Elephant Man” is steeped in classic rock vibes, and serves as breath of air from the preceding ten tracks. There’s a southern charm and swing to the drumming and guitar work, yet still quintessentially Mastodon sounding.  Having recently made it’s on-stage debut at the band’s live-stream at the Georgia Aquarium, the tune gets a little overlooked in place of it’s companion piece “Joseph Merrick” from the following album Leviathan. While that song is also excellent, there’s something special about the dark waltz of “Elephant Man”, and it’s arguably the best instrumental that Mastodon has released to date.

A faithful rendition of one of Thin Lizzy’s finest works, Mastodon’s take on “Emerald” is an absolute triumph. The band’s heavy and raw sound works perfectly with Thin Lizzy’s hard rock/proto-metal riffing and wailing guitar work, with Brent Hinds’ doing a more than commendable job of delivering Phil Lynott’s hard-to-imitate vocals. Originally released on a split 7” with American Heritage in 2003, the track resurfaced on the ‘expanded’ edition of Leviathan that was packaged in the limited 2008 Mastodon boxset. In other words, a studio version of this song has never been easily accessible (outside of YouTube of course), but that hasn’t stopped Mastodon performing it live from time to time, especially in Thin Lizzy’s native Ireland.

A deep cut from the band’s sixth full length Once More ‘Round The Sun, “Feast Your Eyes” is as close to straight-ahead hard rock that Mastodon have created. The verses and choruses highlights the Atlantan’s strengths when they want to create direct, to-the-point music, while the bridge shows their adept musicianship and ear for complex yet melodic hooks. “Feast Your Eyes” only featured briefly during the Mastodon’s 2016 European and 2017 West Coast tours, before being shelved indefinitely – which is a shame, as the track stands toe to toe with any other songs from Once More ‘Round The Sun.

Hunters of the Sky

A track that Mastodon have never pulled out in the live domain, “Hunters of the Sky” is the perfect example of the album that birthed it, 2006’s superb Blood Mountain. With one foot in their heavier early days, and the other moving towards the more proggy yet melodic path they’d follow, it’s a whirlwind of big low-tuned riffs, twisting time signatures and multi-faceted vocals. The huge tempo-dropped ending passage is undeniably awesome, and frankly fades out way too suddenly – any lesser mortals would have driven it into the ground. How it’s never made it into their setlist is beyond us – if anything it’s testament to how strong Blood Mountain is as a whole.

Recorded in 2011 and originally featuring on the ZZ Top tribute album A Tribute from from Friends, (as well as cropping up on the Japanese release of Mastodon’s fourth LP Crack the Skye), “Just Got Paid” sees the Atlantan’s tackling one of the ZZ Top’s early classic tracks. Brent Hinds handles the vocals, and he arguably sounds as good as he ever has, with his scraggly voice a perfect fit for the bluesier number. Featuring ZZ Top’s Billy Gibbons on lead guitar, Mastodon’s “Just Got Paid” is much like their aforementioned cover of “Emerald”; our boys are smart enough to stick to the original arrangement and just add a bit of modern grit and power to the proceedings. It’s a great cover, and certainly one more successful efforts from the tribute release it came off – the album’s following tune, Wyclef Jean’s attempt at “Rough Boy”, might be one of the worst things I’ve ever heard.

Another cover, this time of one of the band’s more contemporary influences; Melvins. “The Bit” is almost tailor-made for Mastodon, and the less informed could be forgiven for thinking that it’s a lost early-days Masto-original. The track already features massive riffing and a marching tempo, with the band just slightly turning up the pace and distortion to make it their own. Coming off the 2005 Melvins tribute release We Reach: The Music of the Melvins, Mastodon have featured “The Bit” live multiple times throughout the years, with a version of it featured the 2011 LP Live at the Aragon. A truly awesome cover.

A bonus tune, only found on the deluxe edition of 2010’s The Hunter, “The Ruiner” is a furious and relentless riff-fest. The tempo and intensity never lets up, and perhaps that’s why it was relegated to ‘bonus track’ status; as it sounds more akin to Leviathan rather than it’s more melodic and restrained brethren on The Hunter. Both it, and fellow bonus track “Deathbound” are great Mastodon cuts, but maybe came an album or two late and have become unfairly somewhat forgotten. At least “Deathbound” had a memorably insane film clip made for it. Still, “The Ruiner” deserves to be revisited and was worthy of being on The Hunter proper.

A film by all accounts nobody saw and a soundtrack that not many people heard, Mastodon’s contributions to the 2010 box office bomb Jonah Hex is something of a blip on their career. On paper the Jonah Hex: Revenge Gets Ugly EP seemed like a great idea (aside from its clunky title); having a credible, open-minded metal band recording a heavy-music based score for a western-revenge movie. Sadly, both the film and its score were bogged down with a myriad of production issues, and only four songs proper were commercially released by Mastodon and film composer Marco Beltrami. It’s 100% worth exploring by fans though, with “Indian Theme” and the featured “Train Assault” taking the mid-career sound of Mastodon and fusing it with an epic cinematic scope. Had the tracks been featured on a more successful film, they’d be a bigger part of the band’s career, but alas it wasn’t meant to be.

Word to the Wise

Another tune that has yet to make it’s live debut, “Word to the Wise” is lifted from Mastodon’s excellent seventh album Emperor of Sand. Lots of great instrumental work on display, especially in the densely layered yet melodic bridge, while Dailor’s vocals soar in the big chorus. “Word to the Wise” is the perfect example of the band that Mastodon have naturally evolved into, but seems to have been left in the wake of bigger singles “Show Yourself”, “Steambreather” and the Grammy-winning “Sultan’s Curse”. Tucked away in the middle of the LP, it’s a great song that deserves more recognition.

So what do you think? Any tracks here that you weren’t aware of, haven’t heard in a long time or maybe didn’t appreciate first time round? Did we miss any even more obscure and forgotten Mastodon tracks? Let us know in the comments below!