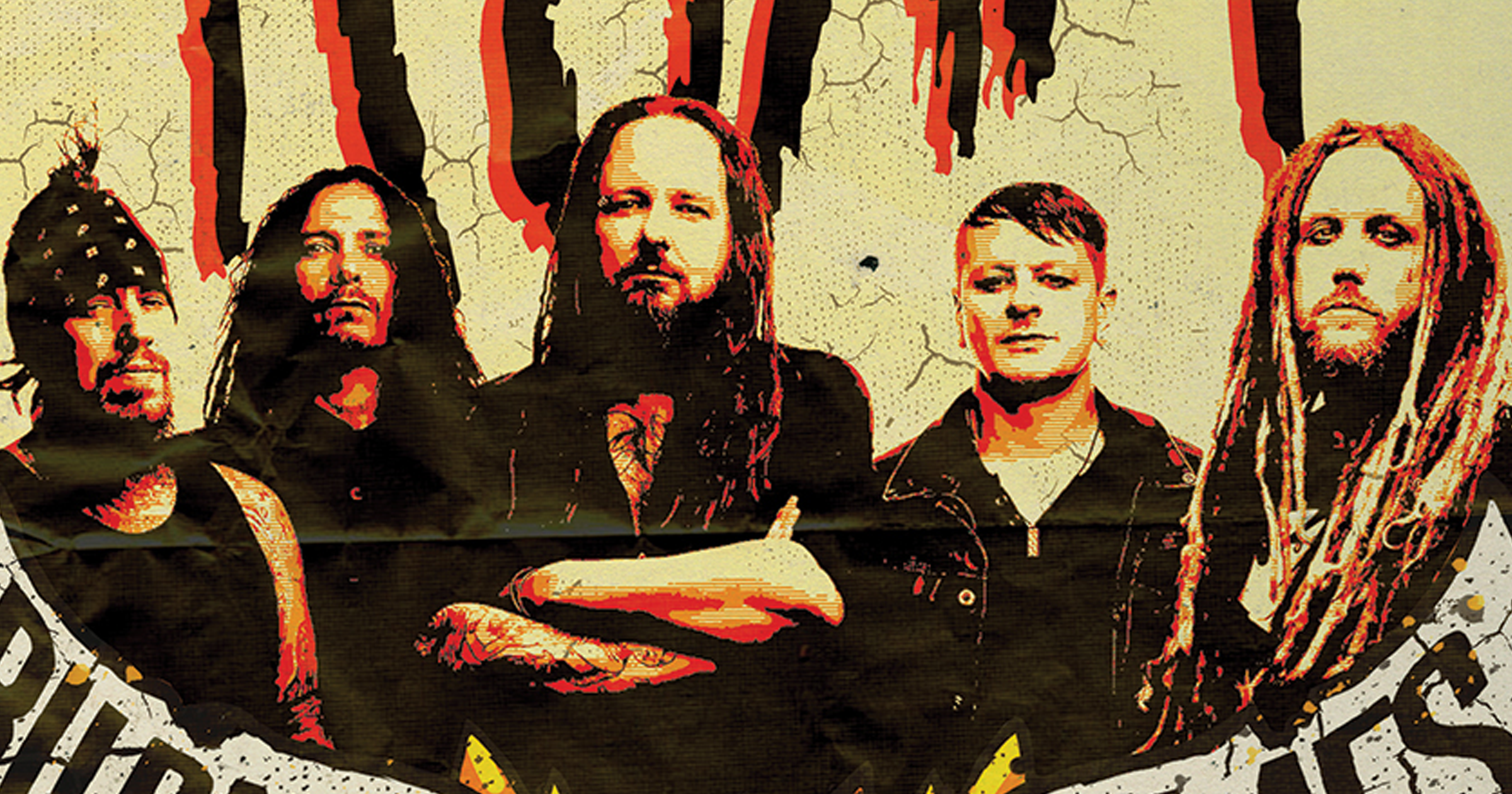 Heavy metal heavyweights Korn can often be credited for not overloading their albums with songs for the sake of it. Besides the bewildering 12 tracks of silence on Follow the Leader, the Bakersfield outfit tends to keep their records lean and mean with an emphasis on omitting filler. But what about all those songs that aren’t deemed worthy enough to be included on these landmark LPs?

Whether it’s B-sides, demos, soundtracks, or simply unreleased songs – there are some stunning obscurities that the group has concocted during their lengthy 25-year-long career in the music industry. While there certainly are the usual Korn traits permeating most of these entries, incredibly, some of these oddities contain material that sounds completely unlike anything else the group has released to date.

You’ve probably never never (sorry, I had to) heard these elusive beauties from the canon of influential metal giants Korn, but once you have, you’ll likely ponder if they should have been abandoned at all in the first place. In my opinion, some of these prime cuts are certainly worthy to have made their way onto a studio album…

10. Trapped Underneath the Stairs

There’s immediate Life is Peachy vibes at the start of this one as guitars oddly screech under frontman Jonathan Davis spitting out his frustrations in a state of exhaustion and helplessness. This is the same old-school Korn you know repackaged on their 2010 release Korn III: Remember Who You Are – an album which was divisive amongst the fanbase for its stripped-down sound and attempts to replicate their (in many ways) irreplicable first album. Regardless of what you thought of the record as a whole, you would have missed out if you didn’t get the special edition version of the LP as it featured this underrated tune. What really takes this one up a notch though is the bruising breakdown that the group launch into. It sees Davis mutate into his demonic form as he shifts from beautifully soft to crushingly hard in the space of a few seconds, while the rest of the band simultaneously provides one of the heaviest instrumentals that they have ever conjured up. Overall, It’s thrilling stuff, inevitably creating a strong argument for the song’s inclusion on the main album’s tracklisting.

Under the moniker of Dust Brothers, very few producers were as prolific as the electronic coupling of E.Z. Mike and King Gizmo from ‘95-’00. Between producing a Grammy Record of the Year nominee in 1996 with Beck’s Odelay, and taking the lead in the music department for the mind-bending 1999 thriller Fight Club, the Los Angeles duo certainly made their mark in music and film during this time period. They even squeezed in an eyebrow-raising collaboration with Korn for the 1997 superhero flick Spawn. Entitled “Kick the P.A.”, this funky freak-fest utilizes spooky synth lines, distorted guitar riffs, and head-nod-inducing breakbeats to create a weird smorgasbord of sounds and textures – the perfect backdrop for Davis to showcase his unconventional vocal capabilities. Dust Brothers deserve the plaudits here for concocting a new musical world for these nu-metal innovators to inhabit. They also produced "MMMBop" by Hanson but we’ll leave that for another time…

8. Calling Me Too Soon

Thought Korn had gone soft after all of these years in the game? Think again. The group goes hard on this stellar bonus track from 2016’s The Serenity of Suffering. “Calling Me Too Soon” was only featured on the record in certain regions, which is a shame really considering what a well-rounded and finely balanced track it is. Of course, it’s pretty standard fair up until the chorus as it follows a well-known Korn formula of a hard-hitting intro followed by an eerie verse. However, the band takes an unexpected turn on the chorus as they deliver beautiful melodies and anthemic vocals that deserve to be belted out at an arena show. The five-piece are more known for their downtuned instrumentals, so it’s refreshing to see them adopt a more tuneful approach. Combine this with a breakdown that could give even the biggest Korn detractor whiplash, and you’ve got a fine track that could’ve easily been slotted into the main album.

Some circles within the metal community like to turn their nose up at Korn’s mainstream breakout album Follow the Leader, largely due to its strong embracement of hip-hop beats and rhythms. While it may have been hard to swallow for many purists, there’s no denying just how infectious much of it was and still is to this day. Included as a B-side on the “Got the Life” single in 1998, “I Can Remember” stays true to the same tried and tested genre fusion underpinnings of the source material, while also standing as a very solid song in its own right. Despite sounding eerily similar in the verses to “Seed” from the same album that it was deemed unfit to be included on, this clobbering throwaway could definitely have been included on the LP with a few tweaks here and there. It certainly doesn't reinvent the musical wheel, but “I Can Remember” does deliver more of the same overpowering bounce and off-kilter nuance that Follow the Leader so memorably contained.

Korn continued their work for mainstream Hollywood blockbusters with 1997’s “Proud,” which was included on the soundtrack for the slasher movie I Know What You Did Last Summer. The song sounds like it could’ve been featured on their sophomore effort Life Is Peachy thanks to its guitar spasms and piercing delivery. They go into attack mode from the get-go, utilizing a disorientating riff that almost trips over itself with the guitarist’s own enthusiastic charge. “You took no pride in me, but now I'm your everything” pleads Davis in the chorus over an eerie musical backdrop that sees the outfit at their melancholic best. This track deserves more attention than it currently has garnered – most notably due to Davis sounding like he’s close to bursting a blood vessel in the song’s volatile breakdown, and a drumming masterclass from David Silveria throughout this emotional rollercoaster of a song.

One of the reasons why I personally felt completely underwhelmed by Korn’s 2011 release The Path of Totality was down to the ham-fisted nature of it all. Gone were the subtle electronic intricacies heard in songs like “Alone I Break” and “Make Me Bad,” replaced instead with blaring synths that had no great meaning or feeling behind them. A prime example of Korn at their computerized best was their work on 2005’s See You On the Other Side. Something about the LP just sounds so wrong, but yet, so right at the same time. It’s a bizarre paradox – one which they emphasize greatly on the Japanese-exclusive bonus track “Too Late I’m Dead.” Davis sounds absolutely crazed on the chorus while sounding smoulderingly sadistic on the verses. It’s the former of the two which really takes this one into unknown realms though – a mystifying chorus that sounds completely and utterly bonkers. The multiple-time Grammy Award-nominated production team The Matrix excels at pushing the outfit to its limits from a stylistic standpoint. Now, if we could just get Davis to delete Skrillex’s number from his phone, we could get back to this sort of electronic eccentricity again…

Before there was ever a self-titled album, there was 1993’s Neidermayer's Mind. This unofficial demo included material that would later come to fruition on the band’s breakthrough debut LP, however, the sessions for the demo also featured some tracks that hit the cutting room floor. One of them was “Layla” – a track that bears similarities to the influential album while also possessing its own unique identity. You can thank a wiry main guitar chord for that. It contains the same off-kilter peculiarity that would come to define the band in the proceeding years, with Davis expanding upon this further with a demented performance behind the mic. The middle section slows things down before the group puts their foot back on the pedal, finishing with a fiery flurry. It may sound very much within Korn’s wheelhouse, but the song’s familiarity doesn’t take away from its satisfying hooks.

Originally released as a B-side on the “Shoots and Ladders” single before appearing on the soundtrack for the 1996 superhero motion picture The Crow: City of Angels, the stop-start stalker “Sean Olsen” is another little-known Korn composition that has unfortunately flown under the radar. This cryptic corker is creepy and bewitching in all the right places. It sees Davis attempt to exercise his demons again through cathartic screams and utterances, backed up by an air-tight instrumental section that sputters along with devilish undertones. The unsettling mood is made all the more unnerving when analyzing the lyrical content – arguably some of the darkest the group has ever penned. As was the case with much of their first release, It seems to focus on child abuse and social rejection, with Davis seemingly alternating between two personalities. “Sean Olsen” is twisted and sadistic – something the band certainly mastered at an early age.

As was the case with “Layla,” “This Broken Soul” was another composition that was omitted from the outfit's self-titled debut album. This unreleased outtake is particularly noteworthy for its absorbing dark tones and stylistic similarities to the rest of their classic first record. Davis sounds particularly tormented here, bearing his soul for the world to see with his fragility becoming increasingly concerning as the track runs its depressive course. He goes from disheveled to commanding from the verse to chorus switch-up – his raspy, raw vocal tone permeating his desperate cries of “This broken soul!” as the rest of the group pull him further down into the abyss via some sinister and ominous riffage. The only logical reason I can think of for this emotive epic not making the cut on their self-titled album is due to the sheer emotional weight that was already packed onto the record. Besides that, this is a stark and all too real delve into the emotional anguish of loneliness and alienation.

This otherworldly stunner represented the first (and arguably last) time Korn approached such a unique sound – one which remarkably added an air of ancient mysticism to the proceedings. Released in 1999 for the Arnold Schwarzenegger-fronted horror romp End of Days, “Camel Song” is a seldom-discussed track that every fan of the band should be made aware of. From the middle eastern-inspired guitar lines to the interlocking drum and bass rhythms, Korn effortlessly drifts through the cosmos for this hypnotic pearl. Tantalizingly sandwiched between the release of Follow the Leader and Issues, this track retains the same hip-hop bounce of the former while incorporating some of the more expansive and textured sounds that would come to fruition on the latter. Still, “Camel Song” sounds totally alien to anything the group released before or after, ultimately making it not just a cut that should have made a studio album, but a composition that could’ve easily been released as a single. Incredible stuff.

Which obscure Korn track is your favorite? Did it make the cut on our list? Let us know below in the comments!