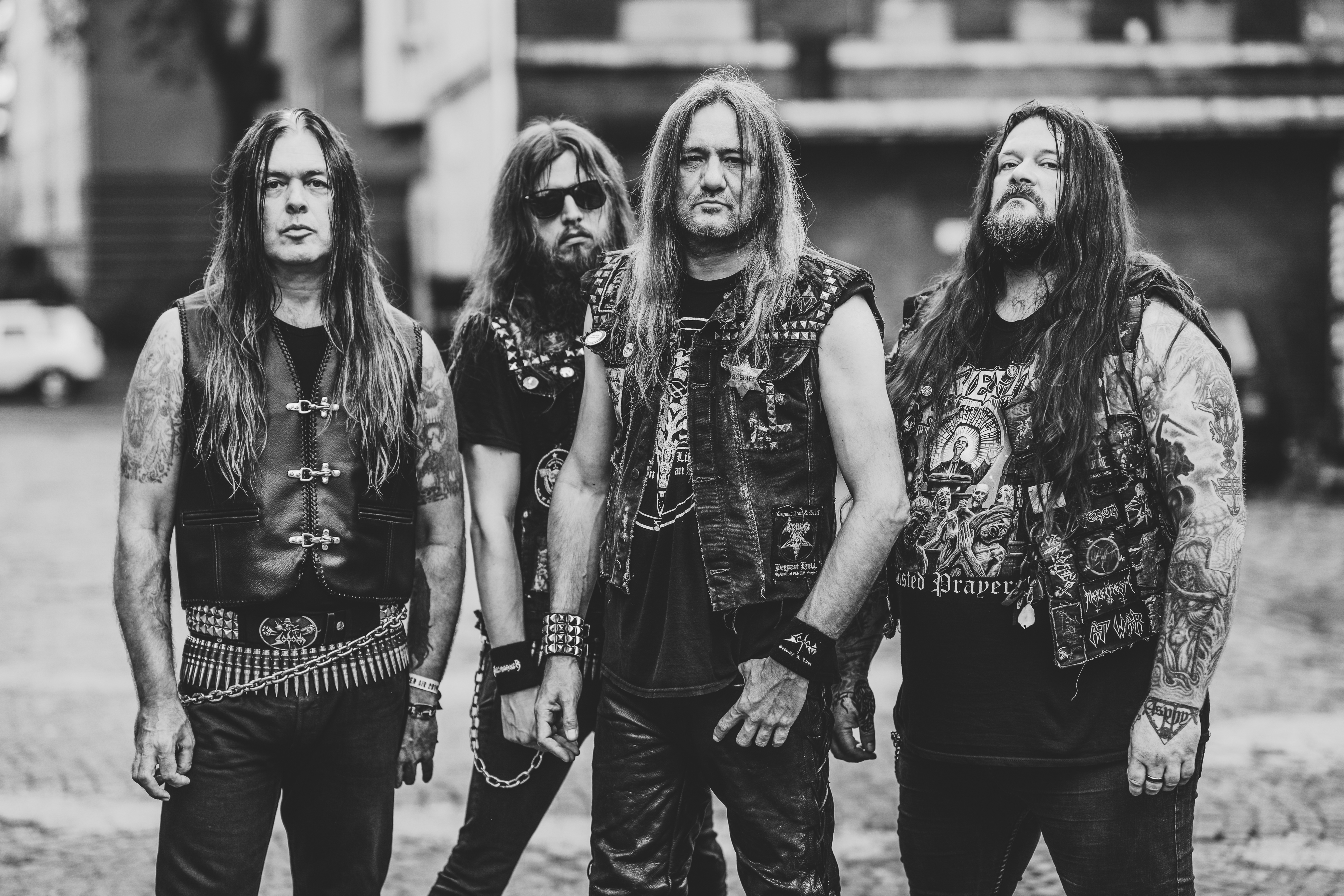 Teutonic thrash titans Sodom aren't the type to keep fans waiting. The German legends are set to release their second EP of new material in as many years, dropping Out Of the Frontline Trench on November 22nd.

The EP comes nearly a year to the day from their last release Partisan, the first in this two-EP series that follows 2016's Decision Day, and one that features a near entirely reshuffled lineup. Longtime vocalist and bassist Tom Angelripper is joined by Stefan 'Husky' Hüskens on drums, and dueling guitarists Yorck Segatz and the returning Frank 'Blackfire' Gosdzik, who performed with Sodom during their peak period from 1986-89.

Angelripper caught up with Metal Injection to talk Out of the Frontline Trench, the reshuffled Sodom lineup, 30 years of the iconic album Agent Orange and staying true to their fans.

On New Material with the New Lineup

I like all the songs. It's the first time that we released two EPs without an album. But we want to show all the people that the band is still working on songs and still alive, and active. I think the new album we've got to release next year. But there is no release date, we need to talk to the record company. We'll bring it out next year. But when we finish all the songs, arranging and writing the songs, we talk about a release date.

I'm so glad to get Frank back. I remember when Berenemann was still in the band, we always talked about getting a second guitarist in the band. He was never really interested in it and he said, 'I'm the guitarist, I never accepted the second guitarist by my side'.

When I split up with them, you know, I could take the idea to take a second guitarist. And Frank on the guitar is amazing. I remember back two years ago we had 30th anniversary show in Germany with all the ex-members. Frank played "Nuclear Winter" … it sounded exactly like on the original albums. It was amazing. To take a second guitarist, Yorck … the combination between these two guitarists is amazing. And now we are able to play songs in the live set that we couldn't do before because we were missing a second guitar. (the EP) is just a gift for the fans. When you bring out an EP with three songs or five songs it's the same price in the end. We want to show the people what Agent Orange sounded like exactly in the beginning.

On Sodom's Status as a Thrash Band

For me, in my opinion, thrash metal means do what you want. We get no dictation from record companies or anybody telling us to do this or do that. That is Sodom. We are free to do what we want and for me that is thrash metal. We always want to do it as heavy as possible. And in the beginning, when we started writing songs in 82, 81, you know, we wanted to be the heaviest band in the fucking world. We are not. Who is the heaviest band? But we always tried to do it more brutal and tried to write better songs. But there was no dictation from outside and we never look at what other bands do. We are not interested, we just do the music because we love this kind of music.

On the new songs there was some mixture between thrash metal and crust punk, a little bit black metal. We never think about what we're gonna do. We just do music and just do metal. So in my opinion, Sodom is not a typical thrash metal band. In the beginning nobody was talking about thrash metal. I think this word came out in 83, 84. But we started in 81. We just do metal.

On Appreciation for the Metal Fan

Sodom is a band who never changed. OK, we want to make money. I think every band needs to make money to keep the band forward. We always realize that these guys will come to the shows and they're gonna pay the price. They're going to buy the albums and gonna buy the shirts. These people keep the band alive. That's why I'm talking all the time when we do a show, 'Thank you so much'. Sodom is a band who always want to give something back. We always want to stay after the show for a signing session, for meet and greet, get some beers and talk to the fans. That's what I told to the people. We are no rock stars. We are just metal fans making music for awhile. That's the only difference.

Sodom is a band who will never change. We never want to leave the fans disappointed because we get more melodic or more commercial or whatever. We want to try to keep our own spirit. We want to keep our own roots. There was a lot of bands talking about going back to the roots. Sodom is the only band in the world that did it. That is the big difference between Sodom and the other bands in the world. Even if you're talking about the 90s, there are a couple of bands who tried to get more commercial because they get a lot of pressure from record companies, selling more copies, selling more albums, whatever. We never mind, we fucked them. We released Get What You Deserve and Masquerade in Blood. The people never forget. We have to write new songs and we tried to do it better and we tried to do better productions and get more ideas into the songs. But in the end we never change. 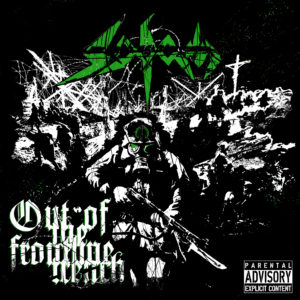 On Over-saturation in Metal

So many bands come out every month. It's getting out of control. I never have the time to listen, or the money to buy all this stuff. Younger bands approach me and ask 'I want to make a thrash band, what do I have to do?' I always told them never give up anything. Never give up your school or studio or your work. Just do the music for fun. The times change. In the beginning there was just a handful of thrash bands and they all get the chance of getting a record deal, but nowadays it's impossible. You cannot repeat. I know awesome bands who try to do the same music like we did back in the 80s, but you cannot repeat the time. When we recorded Obsessed By Cruelty or Persecution Mania, it was the perfect album for this time. You cannot repeat the history.

On 30 Years of Agent Orange
Advertisement. Scroll to continue reading.

For me, that was a big chance to give up my job in a coal mine and be a professional musician. I get money from a record company every month and they told me to stop working in a coal mine, just concentrate on the music, just go on tour or go to rehearsal with the band. Agent Orange, for some people, it is a masterpiece. I have people tell me when they listen to Agent Orange, it's like sitting in a time machine. There are a couple of emotions coming back if you listen to this album.

I know we got some offers, but for next year, doing some shows where we play the whole album, Agent Orange. I think we would do it. I think there was a couple of songs we play live anyways. It's "Remember the Fallen", "Ausgebombt" and "Agent Orange" itself. There are also a couple of other songs we want to put in a setlist. We got an offer to play Wacken next year doing an Agent Orange special set. We also get some some offers to do Obsessed By Cruelty completely, but it's impossible. But Agent Orange is a big thing, it's the most important album in my career. So why not?

On Unity of 'the New' Sodom
Advertisement. Scroll to continue reading.

My members, you know, like Husky or Yorck, they were standing 100 per cent behind all of what we got to do. That was a problem with the ex-members which I kicked out of the band. They were not really interested in the older material. But if you're going to do a Sodom show, you have to play all the classics.

When I kicked them out of the band I got some bad reviews saying 'they kicked them out of the band, Berenemann was what, 20 years in the band? Now the band is going to die'. No. We never. I think that was a hard decision to split up with them, but I'm so satisfied and I'm so happy that Frank is back in the band. Now it's a band, you know what I mean? Playing in Sodom is not just a job. I need more input from all the other guys.

Nowadays there's a friendship in the band. I don't want to change the lineup. When I change it I have to restart from the beginning and it's a lot of work. But I'm so glad to get these guys in the band. It's not perfect. Sodom was never the perfect band. We just want to play our songs and we want to keep the spirit.